The finals in Spain played host to the clash between Teutonic efficiency and French élan as Germany met France in the hugely anticipated semi-final in Seville. 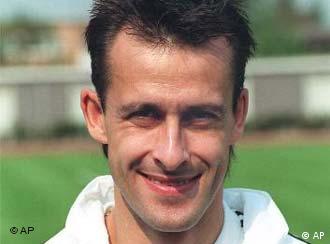 It was billed as the clash of two schools of thought: German determination and will to win against French élan. The classy French had excited spectators throughout their progress in Spain and it was an eager crowd which gathered to see the team of the moment take on the Germans.

The West German side had provided few signs that this incarnation would be anything other than solid while it was clear right from the outset that the French would have the technical edge with captain Michel Platini pulling the strings in midfield.

As predicted, the German defense sat back from the start and absorbed constant French pressure. However, it was part of the plan. Germany then hit back at a frustrated France and took the lead through Pierre Littbarski. French pride had bee piqued and again Les Bleus swarmed towards Toni Schumacher's goal with Platini, Dominique Rocheteau and Alain Giresse leading the charge. When Rocheteau was clattered in the box, Platini made no mistake from the spot kick to equalize.

One of the game's most talked about moments came soon after the break. A sickening collision between the German keeper and Patrick Battiston outside the penalty area left the French player unconscious and Schumacher preening in front of enraged France supporters who boiled over when referee Charles Corver took no action.

With no more goals in regulation time, it took Marius Trésor's extra-time free-kick to break the deadlock. When Giresse made it 3-1, Germany looked dead and buried. But goals from substitute Karl-Heinz Rummenigge and Klaus Fischer forced the penalty shoot-out which Germany won after Schumacher had saved from Bossis and Horst Hrubesch had scored the decider.