Hosts Germany struggled through the early stages in the 1974 World Cup but had picked up speed by the time they met the Netherlands in the final. It would be a contest of Total Discipline versus Total Football. 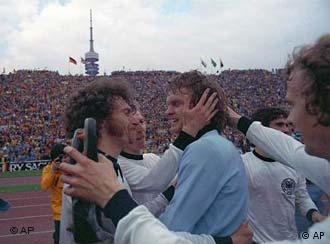 As the hosts and favorites, West Germany had been disappointing in the early stages with a defeat to East Germany in the first round the worst of the qualifying hiccups. There was even unrest in the usually stoic German dressing room with team captain Beckenbauer being begged by his team-mates to urge coach Helmut Schön to make changes in the team's line-up and tactics. The minor revolution paid dividends and the Germans upped their game in the knock-out rounds, beating Yugoslavia 2-0, Sweden 4-2 and the much-fancied Poland team 1-0 in the semi-final.

Waiting for the hosts was the team from the Netherlands fielding the likes of Cruyff, Neeskens, Rep and Rensenbrink. The Dutch, allowed to create and play without constraint in a style which would become known as Total Football, had waltzed to the final beating Argentina (4-0), East Germany (2-0) and Brazil (2-0) on the way.

The hugely talented but vain Cruyff, who had mesmerized the world through the tournament, took it upon himself to win the cup for Holland. And it was he who created the first drama of the final, being brought down in the German penalty area following a solo run. Neeskens dispatched the penalty before the Germans had even touched the ball and with just a minute gone on the clock, the hosts were behind. However, Cruyff's efforts were soon stifled by his man-marker Berti Vogts and the playmaker's influence waned. With Beckenbauer, Uli Hoeness and Wolfgang Overath dominating midfield, Germany fought back with goals from Paul Breitner and Gerd Müller sealing the 2-1 win.