Rescue workers have been gathering wreckage and recovering bodies trapped in the debris of the A320 that crashed last week. A road was being created for workers to transport aircraft parts. 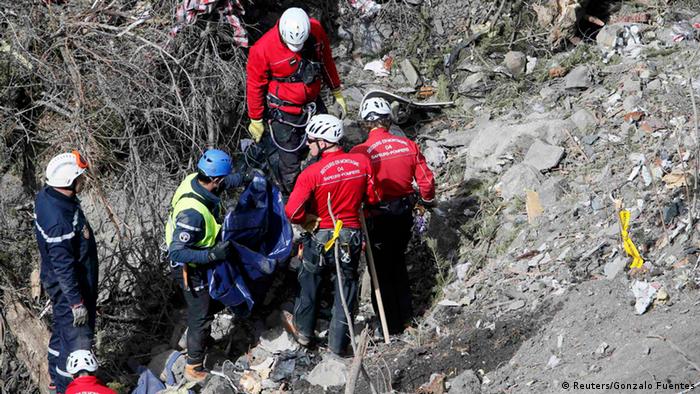 Investigators were busy recovering bodies from the Germanwings A320 crash site in the French Alps on Sunday, German news agency DPA reported.

"The priority is to recover the bodies … by the end of the coming week. After that we can move on in a second stage to recovering the parts of the plane that are indispensable to getting at the truth," French prosecutor Brice Robin told reporters.

Workers were trying to create a track to transport aircraft parts which were too heavy to be transported by helicopters. They were also trying to look for the second flight recorder among the aircraft remains that had scattered around the site with "slopes of 40 to 60 degrees, falling rocks and ground that tends to crumble," Patrick Touron, deputy director of the French police's criminal research institute, told news agency AFP.

Examiners had also not found "a single body intact," Touron added, but forensic teams had isolated 78 distinct DNA strands from body parts. "We have not been identifying victims, but traces of DNA. Given that we have not yet conducted comparisons with the DNA of relations (of the victims), that is impossible to specify," Robin told journalists.

Meanwhile, Sunday's edition of German newspaper Bild and the New York Times reported that the co-pilot Andreas Lubitz had sought treatment for retinal detachment. Lubitz is suspected to have shut out the pilot from the cockpit and deliberately crashed the plane into the Alps in southern France, 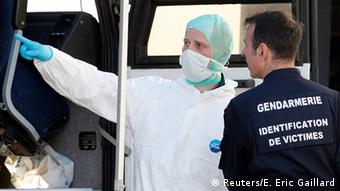 though other theories include a buildup of toxic fumes in the cockpit or a sudden bout that could have caused the co-pilot to pass out.

Bild reported that data from the cockpit recorder showed the captain shouting, "For God's sake, open the door." Loud blows could be heard from outside the cockpit along with passengers' screams, the Bild wrote, though the paper did not say where it obtained the flight recording.

The German tabloid also reported that Lubitz's girlfriend, a math and English teacher, was pregnant. In a Saturday revelation, the Bild said it had spoken to Lubitz's ex girlfriend who reportedly said the co-pilot wanted to do "something to change the whole system and everyone will know my name and remember."

German prosecutors on Friday also seized medical documents that suggested Lubitz was being treated for a psychological ailment. Police found "medicines for the treatment of psychological illness" during a search at the co-pilot's house in Düsseldorf.

The pastor of a Lutheran church in Montabaur, Lubitz's hometown, who knew Lubitz and his family, said he could not imagine any of this speculation being true and that the community stood by the co-pilot's family. "The co-pilot, the family belong to our community and we stand by this, and we embrace them and we will not hide this and want to support the family in particular," Michael Dietrich told the Associated Press.

Investigators have been focusing on Lubitz's mental state as an important line of enquiry, but a French prosecutor said on Saturday in Düsseldorf that the possibility of a technical defect which led to the crash was also being examined.

Calls for restraint in the media coverage of the Germanwings crash this week are becoming louder. The chief executive of Airbus has described some speculation as "outrageous." (29.03.2015)