Women's marches draw thousands in Europe, US and around the world

Women gathered in Berlin, London, Washington, DC, and New York to commemorate the protests at the election of Donald Trump. Bad weather is hampering the event in Washington.

Hundreds of thousands of women were marching in Berlin, Rome, London as well as in US cities on Saturday to mark the anniversary of demonstrations that drew millions of protesters to the streets the day after Republican President Donald Trump's inauguration in January 2017. 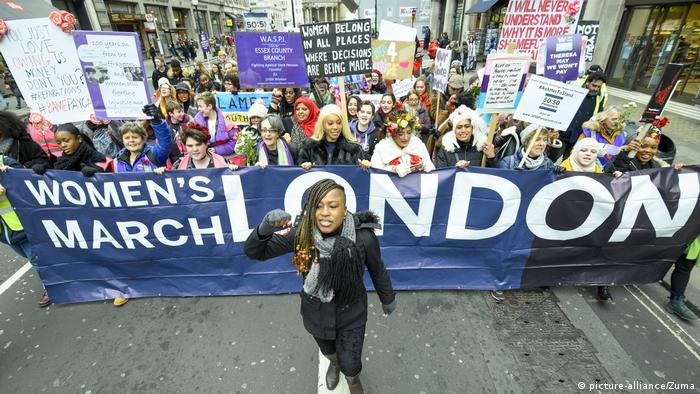 London's theme for this year's rally was 'Bread and Roses'

Demonstrations and rallies are scheduled in Washington, DC, and at some 350 sites across the US to display opposition to Trump, to demand an end to violence against women and to push for equality.

The Women's March in Washington on Saturday was bracing for inclement weather and coping with an ideological split, and reconfiguring its route due to the government shutdown.

The original march in 2017, which was held the day after President Donald Trump's inauguration, drew hundreds of thousands of people. The exact size of the turnout remains subject to a politically charged debate, but it's generally regarded as the largest Washington protest since the Vietnam era.

This year organizers for the third rally submitted a permit application and estimated that up to 500,000 people would participate, but the actual turnout was expected to be far lower. Parallel marches are planned in dozens of US cities.

Activists said the marches were also a chance to celebrate the gains made in the 2018 elections, which saw more women elected to the US Congress than ever before.

The original plan called for participants to gather on the National Mall in Washington, but with the weather forecast predicted snow and freezing rain. As the National Park Service is no longer plowing the snow, organizers changed the march's location and route to start at Freedom Plaza, a few blocks from the White House, and head down Pennsylvania Avenue past the Trump International Hotel.

An intense ideological debate has roiled this year's march in the US.

Teresa Shook, one of the movement's founders, in November accused the four main leaders of the national march organization of anti-Semitism. The accusation was leveled at two primary leaders: Linda Sarsour, a Palestinian-American who has criticized Israeli policy, and Tamika Mallory, who has maintained an association with Nation of Islam leader Louis Farrakhan.

Shook, who is a retired lawyer from Hawaii, has been credited with sparking the movement by creating a Facebook event that went viral and snowballed into the massive protest on January 21, 2017.

In a Facebook post, she claimed Sarsour and Mallory, along with fellow organizers Bob Bland and Carmen Perez, had "steered the Movement away from its true course" and called for all four of them to step down.

The four march organizers have denied the charge. However, Sarsour has publicly expressed regret that they were not "faster and clearer in helping people understand our values."

Despite pleas for unity, an alternate women's march has sprung up in protest and they have planned a parallel rally in New York on Saturday a few blocks away from the official New York Women's March protest. 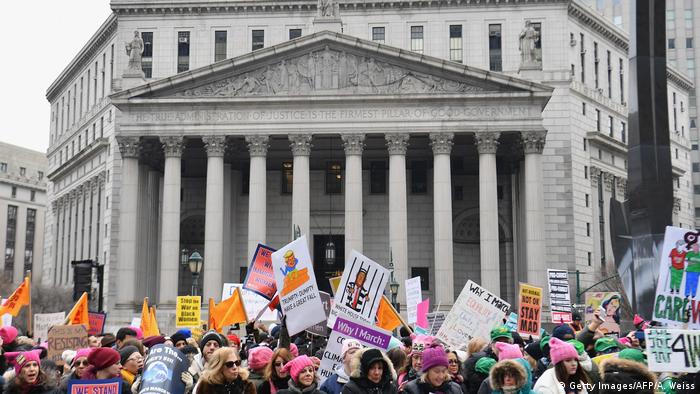 New York had a main and an alternate women's march

Trump's first full day in office belonged to the women who oppose him. The Women's March on Washington and its hundreds of sister events drew millions of participants across the globe. (22.01.2017)

Women across the United States and around the world took to the streets to protest against misogyny and the administration of President Donald Trump. The US march was, however, roiled by an anti-Semitism scandal. (20.01.2019)