The last-eight clash with Denmark will be played on Sunday at 1200 local time after rain in Rotterdam made the pitch unplayable. Steffi Jones' side have an extra day to refine tactics after lackluster displays so far. 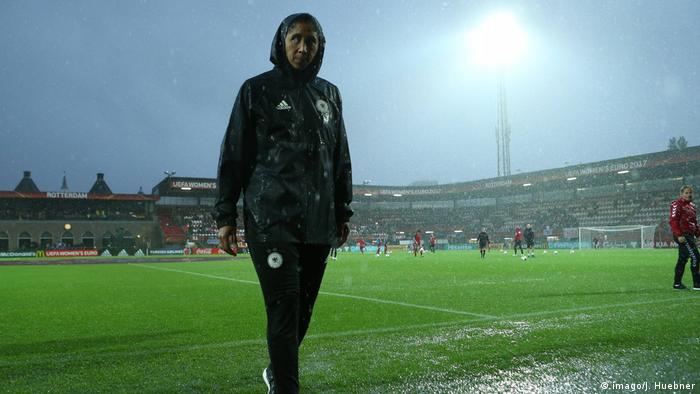 Rain lashed Rotterdam in the hours before kickoff. Officials, including Germany coach Steffi Jones, worked hard to try to get the game to go ahead, brushing surface water off the pitch and using buckets to clear the dugouts.

The game was initially delayed until 21.45 local time but both teams made it known that they were uncomfortable with playing in such conditions.

The players came out to warm up but the ball was getting caught in surface water and the decision was eventually made to postpone, with more rain forecast and then eventually falling.

"It would have been no quarterfinal. We were worried about the safety of the players," Jones told ZDF TV.

The game has been put back to Sunday with kickoff at 12.00 local time. The remaining two quarterfinals also take place on Sunday. Hosts Netherlands beat Sweden 2-0 in Saturday's first last-eight clash.

In their three group-stage games in the Netherlands, holders Germany failed to score a single goal from open play. Three of their four goals came from the penalty spot while the fourth came courtesy of a goalkeeping error after a free kick.

Having faced three opponents who were determined above all to defend, Germany could find goals hard to come by against a Denmark team that conceded just two in the group stage. On the other hand, they only scored two - but both came from open play.

With conditions uncertain for Sunday, a still soggy pitch will certainly hinder both sides.

Check back on all the latest surrounding the waterlogged pitch on our blog:

Germany have beaten Russia 2-0 to finish top of Group B and advance to the quarterfinals of the Women's Euro. Yet again, Germany failed to score from open play but got the goals they needed from the penalty spot. (25.07.2017)