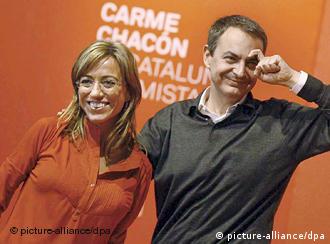 King Juan Carlos swore in the cabinet on Monday, April 14, two days after Zapatero's inauguration as prime minister for a second four-year term.

"I'm very proud that there are more female than male ministers," Socialist politician Zapatero said. "This is a modern and strong government."

The appointment that has attracted the most attention is that of Carme Chacon as defense minister. The posting is a reward for the Socialist rising star's victory in parliamentary elections in Catalonia on March 9. She is Spain's first female defense minister. The 37-year-old, who is expecting her first child in the summer, was previously housing minister. She's not been recorded as having ever commented publicly on defense issues and is known as a pacifist. 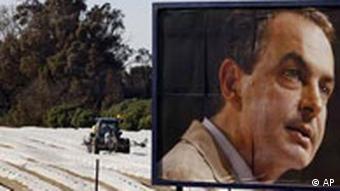 The Socialists won March 9 elections, but are still short of a majority in parliament

Zapatero also named his former chief economic advisor, Miguel Sebastian, industry minister, which includes the energy sector. Sebastian is thought to have played an important role in the two-year takeover battle for Spanish power utility Endesa, Reuters reported. German utility E.ON eventually lost out to Italian utility Enel and Spanish infrastructure group Acciona. Sebastian would be an important player in any further shakeup of the sector.

The youngest cabinet member is 31-year-old Bibiana Aido, who will head up the newly created Equality Ministry. The new Science and Innovation Ministry will be led by Basque scientist Cristina Garmendia and is intended to wean Spain off its dependence on construction and nurture hi-tech industries. Celestino Corbacho and Beatriz Corredor are also new to the cabinet as labor and housing ministers.

The International Monetary Fund says Spain's economy will only grow by 1.8 percent this year, down from 3.8 percent in 2007, as the credit crunch hits heavily-indebted businesses and households.

Zapatero was sworn in on Saturday, the day after parliament reelected him premier in a second round of voting. His candidacy had failed in the first round last week. The 47-year-old heads up a minority government this legislative term. Although the Socialist Party won the election last month, it came out seven seats short of a majority.

Reelected in circumstances similar to in 2004, Zapatero will likely demure to the EU when it comes to international politics. Except in the bloc's relations with Latin America, where he can take a lead role. (11.03.2008)

The European Commission has said it will take Spain to the EU's Court of Justice over failure to drop conditions imposed on German energy group E.ON's billion euro bid for Spain's biggest company Endesa SA. (28.03.2007)

Do you think Zapatero has made Spain more modern? Please include your name and country in your reply.