Women join the Kurdish fight in Syria | World| Breaking news and perspectives from around the globe | DW | 19.02.2014

Syrian Kurds are fighting for an autonomous region in the northeast of the country. They have largely managed to drive out Assad's troops. Now they're fighting the Islamists. A third of the fighters are women. 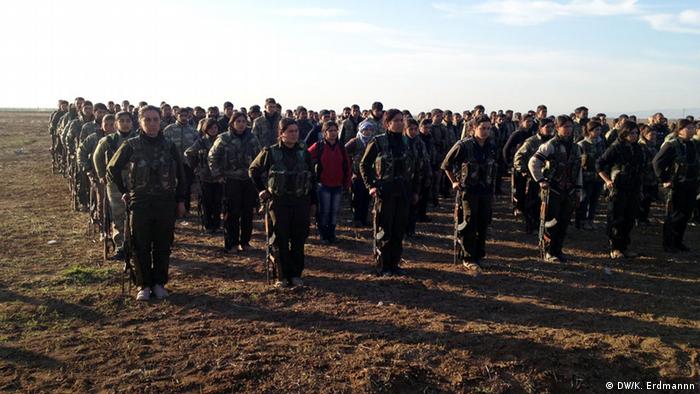 About 200 women and girls of the People's Defence Unit (YPG) in Kurdish Syria stand at the ready on a sandy stretch of ground behind a small hill - tense, staring straight ahead, their Kalashnikov rifles in hand. "This is the brigade's military base," Warsin explains.

A year ago, Warsin, now 25, joined the Kurdish militia near Qamishli, the unofficial capital of the northern Rojava region of Syria, which is mainly settled by Kurds. Weapon in hand, she is clad in a typical Palestinian scarf and a protective vest. Roj, a petite young woman who fought against the al Qaeda-linked al-Nusra Front on the Iraqi border, stands beside her. Last winter, the YPG militia drove the Islamists out, Roj proudly states, adding that they managed to chase out Bashar al-Assad's troops a year before that. 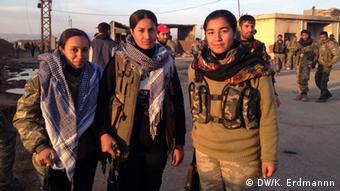 Roj, Warsin and Canda fight for an independent Kurdistan

The YPG was officially founded in 2012 in an attempt to keep Syria's civil war from spreading into the region. The group is regarded as the military wing of the Kurdish Democratic Union Party (PYD). In effect, the entire region is isolated from the outside world because the Syrian Kurds' attempts at self-rule aren't welcomed by all their neighbors. Ankara fears a Kurdish uprising in Turkey should the Syrian Kurds' model succeed. The Kurds in Iraq are split; some carry on a brisk oil trade with Turkey, and would rather not threaten the good relations with Ankara. The Iraqi government entertains sympathies for Syria's Kurds, but remains guarded as long as it is not clear who is to rule in Damascus in the future.

From the classroom to the battlefield

As a result, Syria's Kurds are on their own. But that has led to an outright surge in mobilization in the course of which Roj and Warsin decided to join the YPG. A few months ago, Syrian Kurds proclaimed Rojava to be autonomous.

"First and foremost, we are here because our native country is under attack and we want to defend it," says Canda, a 21-year-old who's a member of the Military Council. "No one forced us, we're volunteers." Canda is talkative and excellently trained in rhetoric and ideology. "My parents are proud of me, they support and motivate me, and feel I'm doing the right thing," she says, and adds that, should she be killed in battel, her family would say "she died for peace and democracy."

Eylem looks young for her 18 years. She's just graduated from high school and had planned to study Arabic. "No one spoke Kurdish here, and it wasn't taught in school, either." A degree in Arabic was much sought after and would have been beneficial, Eylem says - Kurds in Syria were used to adjusting to Assad's regime.

But now, for the first time, Syrian Kurds - above all the women - have the opportunity to shape their own lives. Women make up 35 percent of the 45,000 fighters. "Women used to be suppressed and exploited in our society, and regarded as inferior by the men," Canda says. "Now we have the chance to be role models for Kurds and for other ethnicities - for instance, for Arab women." 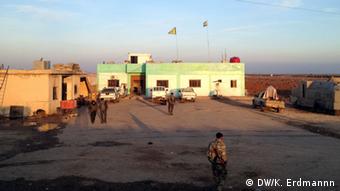 Women will decide the future

The Kurdish party PYD has also introduced a women's quota of 40 percent, and the party's executive is half women. Co-chairwoman to Asya Abdullah is fully dedicated to her political work and equality. She is convinced that "women have become the benchmark." And she continues, "In some sectors, women have become so dominant that now men are demanding a quota." Not every man is happy about that, she says, laughing. Even the male member of the regional parliament who's sitting beside has to laugh at that, but he doesn't contradict.

The Kurdish women's great role model is the rebel leader Abdullah Öcalan, imprisoned in a Turkish jail since 1999. The leader of the outlawed Kurdistan Workers' Party (PKK), who spent 20 years of his life in exile in Syria, repeatedly demanded the liberation of women. Many Kurdish families still display his photo in their living room, and Öcalan's nickname Apo is sprayed on numerous buildings. In their fight for autonomy, the Kurds may turn out to be the winners of the Syrian conflict - as long as they aren't pulverized amid the conflicting interests of Syria's neighbors.

Social media giant Facebook has waded into one of Europe longest-running conflicts after it banned pages belonging to Turkey's largest pro-Kurdish political party. (02.11.2013)