Wole Soyinka: ′Before you talk literature you better oil your gun′ | Culture | Arts, music and lifestyle reporting from Germany | DW | 16.09.2015

Wole Soyinka: 'Before you talk literature you better oil your gun'

Nigeria's Literature Nobel Prize laureate has always been in politics, one way or the other. In Berlin, he discusses Boko Haram's inhumanity and why he thinks citizens should be trained to use arms. 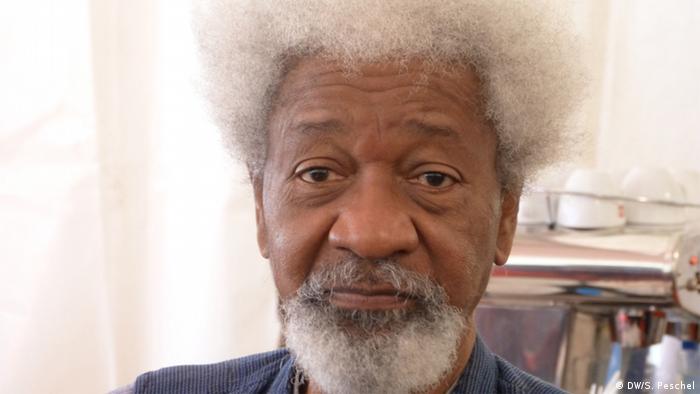 Boko Haram was able to gain ground, says Literature Nobel Prize winner Wole Soyinka in his talk at Berlin's literary festival, because the former Nigerian government failed to take timely action and did not take the threat seriously.

"But these people have a huge agenda which is virtually to overrun the world, not just Nigeria," Soyinka says.

Cautiously hopeful regarding the new president

"Nigeria was caught totally unprepared. The former government fell asleep on the job. Before they were aware, Boko Haram was moving south."

As Soyinka sees it, corruption played a big role in leaving the Nigerian army totally unprepared. Soldiers were so badly equipped they had nothing to rival Boko Haram's superior weaponry. This may be changing with the new president, in office for just three months, the author cautiously believes: "Not just because Muhammadu Buhari is a military man but simply because he is more conscientious. In fact, he himself narrowly escaped death from Boko Haram. They targeted him. So he has a kind of subjective preparedness about him that leaves room for some hope. In the short time he is there, the military has shown a better fighting spirit. Serious new equipment has been supplied, there seems to be a higher morale. The Nigerians generally recognize today that this is not something just happening in a corner but that it is a threat to the entire country."

'The gun should be demystified' 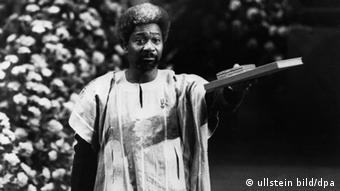 Wole Soyinka at the Nobel Prize ceremony in December 1986

For Soyinka, there is no chance of reasoning with Boko Haram: "What we have learned about the enemy is that it cuts across. The usual theories do not work. These people despise those who try to reason. Their faith is equivalent to submission. That's all they understand."

He sees the specific threat in a kind of competition between terrorist groups, with each seeking to be more shocking and more brutal than the last, describing this as a new facet to fighting terrorism.

"All of humanity is their enemy. Every day, even today, they dash into a small town, kill without asking questions - are you Moslem, are you Christian or are you of your own particular faith-brand of religion - they just kill and kidnap and disappear. There comes a point that before you talk literature you better oil your gun."

'Citizens should be trained to use arms'

That's why, according to Wole Soyinka, citizens should be able to defend themselves. "The gun should be demystified. We need parallel armies, or anything of the sort."

In his opinion, the rise of Boko Haram and other terrorist groups should be a lesson not just to Nigeria, but to the world, that ordinary people can benefit from self-defense training. Aside from the absolutely necessary existence of a state run professional army that should uncompromisingly stay away from politics, Soyinka believes citizens should receive military training. "When you encounter a faceless, ruthless army, which is what Boko Haram, Ansar al-Dine, Al-Shabaab are - they move like an army, they think like an army and they have only one objective - you are on the frontline. And on the frontline you should have some kind of training of defending yourself. Citizens should be trained to use arms." 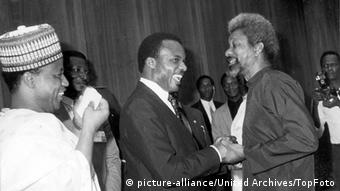 In 1987 Wole Soyinka (r.) jokes at a formal cocktail party in Congo while President Ibrahim Babangoda of Nigeria (l. in white) shares the joke

Arms should not be stored in people's homes, should not be "flying around," as Soyinka puts it, but people should definitely have access to them. "When you are faced with unusual, abnormal circumstances there has to be a civil defense force."

Since entire communities are still being wiped out, Soyinka sees this as a practical necessity and cites the example of Israel, where citizens receive compulsory training.

The role of Islam

And what is the role of Islam in this war? "Islam has always been a self-renewing religion. Legitimate renewal has taken place peacefully. But traditional religions have always been punctured by extreme actions by fundamentalists," says Soyinka, connecting the spread of fundamentalism to the fall of communism and the ideological void it created. "Nature doesn't like a vacuum," he concludes, "so even on the continent of Africa where people are looking for an alternative mode of existence, of productivity, extreme religious fanaticism is what has stepped in after the dismantling of communism. Religion is just another face of de-secularized ideology. Marxism itself was a kind of religion for many people - the same passion, the same mono-directional perspective on human society, the same power and the same fanaticism."

Wole Soyinka, who has always defended the rights of an individual against both communism and capitalism in his writing, positions himself as he always did: "For the simple reason that they place humanity at the very bottom of their concerns, I wish a plague on both houses, I don't care if it is secular or religious ideology. Humanity comes first." 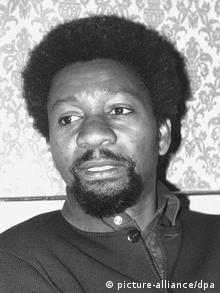 Wole Soyinka as a young writer

Soyinka, exiled for years for protesting Nigeria's military dictatorship and only able to return in 1999, knows what it means to be a displaced person. Naturally he hopes that the Nigerian refugees in Europe will be able to return home to a more stable country soon: "But then, while they are refugees, their host nations have a responsibility towards them. That is an expression of the very meaning of humanism that you look after those who are for one reason or another incapable to look after themselves. There is no other option."

The power of literature

"Nigeria is an excessive nation," even in literature, says the author in regard to the fact that so many young writers from Nigeria are on the threshold of gaining global recognition. "There is abundant talent, especially among the young women."

So what can literature do to help the situation in Nigeria? As an author often in the international limelight since his 1986 Nobel Prize, Soyinka sees literature primarily as a tool, an agent of change.

"Literature can improve awareness. You can use literature to make the government more conscious of its responsibilities to its citizens, and to reduce the disparity between the wealthy and the impoverished."

Nigeria: Freedom of the media under a watchful eye

Despite strict government censorship, artists and the media in Nigeria are finding way to enjoy small amounts of freedom. (07.07.2015)

Once a military dictator, Muhammadu Buhari is the new president of Africa's biggest economy. Buhari was the strongest rival of incumbent Goodluck Jonathan and he is very popular in the north. (28.05.2015)

The Nigerian Nobel laureate for literature, Wole Soyinka, has expressed concerns in an interview with DW that the military could take power following presidential elections in Nigeria on March 28. (18.03.2015)