All pre-run eyes were on returning Olympian Lindsey Vonn, and defending champion Anna Veith was already being congratulated on victory when outsider Ester Ledecka set off. Then the Czech snowboarder made super-G history. 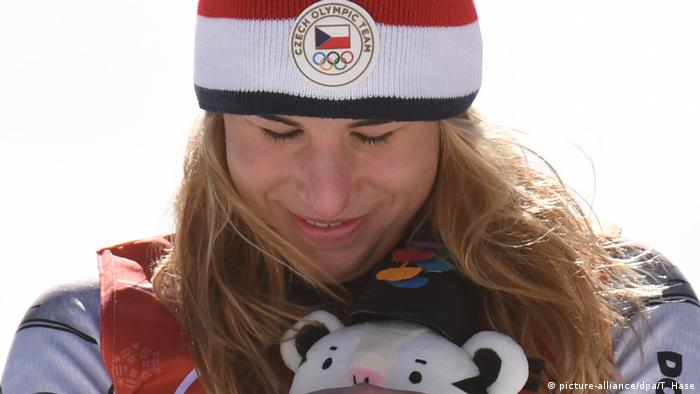 In one of the most remarkable Olympic finishes ever, Czech snowboarder Ester Ledecka won gold in the women's Super-G by one hundredth of a second.

Having crossed the line, Ledecka looked shocked at her time. "How did that happen," the television cameras overheard her say.

"I thought this was a mistake," she said after the race. "I was looking at the board and I thought OK, you're going to put there a couple of more seconds. I was just waiting and watching, waiting until they would change the time."

Perhaps Ledecka was still in shock during her press conference later, as she kept her goggles on to hide the absence of make-up.

Austria's Anna Veith, the defending champion, had already started giving interviews and had been congratulated by the IOC President Thomas Bach, when Ledecka crossed over the line to win by the finest of margins.

The 22-year-old Czech is also competing at Pyeongchang in the parallel giant slalom snowboarding as reigning world champion. In her previous nine World Cup Super-G races, Ledecka had never finished better than 19th and has only had one top 10 finish on skiing's World Cup circuit.

Returning US Olympian Lindsey Vonn finished sixth after an error of judgement on one of the final bends cost her.

"It's definitely shocking," Vonn said of Ledecka's win. "She beat me in training in Lake Louise — that was also surprising."

"I feel like in the Olympics a lot of things can happen, it's not that she didn't deserve it, but there's a lot of pressure on the favourites."

Unburdened by the weight of expectation, Ledecka punched the air when she realized she had gone one better than her grandfather, who won bronze and silver medals with the Czechoslovakian ice-hockey team in the 1960s.