A painting by British statesman Winston Churchill has fetched $2.8 million at auction - a record for his work. The painting was sold amongst other personal artifacts from the celebrated wartime leader. 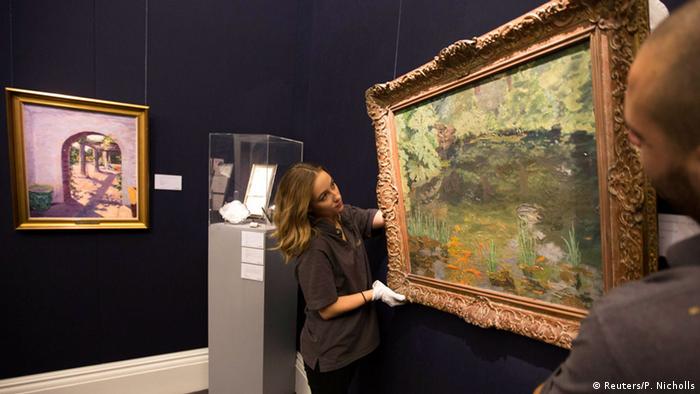 He may be best remembered as the UK's stirring wartime patriot, but Winston Churchill had a somewhat more passive hobby : He liked to paint. And it's a hobby which paid off handsomely on Wednesday, with the record sum for his painting, "The Goldfish Pool at Chartwell," tripling its pre-sale estimate and almost doubling the previous record for his work.

The painting belonged to his daughter Mary Soames who died in May, and was auctioned by Sotheby's amongst a collection that included 15 paintings - widely considered the most significant collection of works to be put on the market - as well as many personal photographs.

A ministerial briefcase from Churchill's time in Cabinet sold for nearly $250,000 and a signed photo to Mary Soames from U.S. President Franklin D. Roosevelt earned more than $50,000, 10 times its pre-sale estimate.

Soames, the youngest and last surviving of Churchill's five children with his wife Clementine, had a close relationship to her father and accompanied him on his many official trips. The auction drew over 900 individual bidders and raised well over $24 million.

Billed as the world's most complex entirely handmade watch, Patek Philippe's "Henry Graves Supercomplication" has smashed its own 1999 record as the world's priciest timepiece, selling for nearly $24 million. (11.11.2014)

The Swiss photographer who captured some of the most iconic pictures of the 20th century, including portraits of Fidel Castro, Che Guevara and Pablo Picasso, has died. Rene Burri was 81. (20.10.2014)

Germany to crack down on antiquity theft

Looters are destroying historic ancient sites in the Middle East, funneling profits in some cases to terror militias. Berlin is proposing new laws for those dealing in antiquities aiming to quell such looting. (12.12.2014)

Along with Radu Jude's Golden Bear-winning film, find out more about the Silver Bear winners of the Berlin International Film Festival's competition.