Facing probable extradition to Sweden for sexual misconduct charges, Julian Assange has applied for political asylum in Ecuador. The Australian national may still seek an appeal before a European court in Strasbourg. 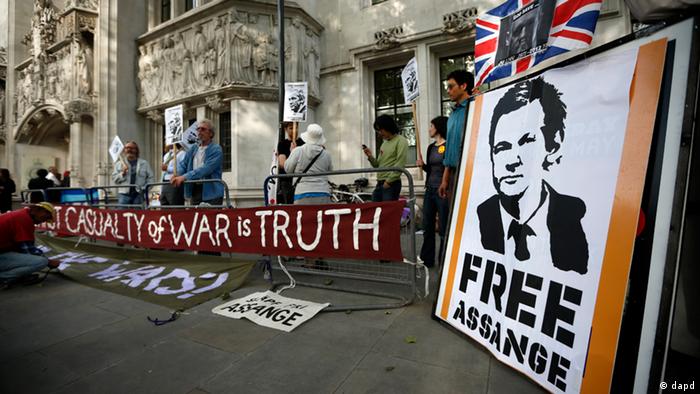 The founder of the whistle-blowing website WikiLeaks, Julian Assange, took refuge in Ecuador's London embassy on Tuesday, while the South American nation reviewed his application for political asylum.

Assange's application for asylum in Ecuador comes less than a week after Britain's Supreme Court rejected his appeal against extradition to Sweden. The Swedish authorities are seeking to arrest Assange on charges of sexual misconduct against two women during his 2010 trip to the Scandinavian nation.

"While the department assesses Mr. Assange's application, Mr. Assange will remain at the embassy under the protection of the Ecuadorian government," the embassy said in a release.

"The decision to consider Mr. Assange's application for protective asylum should in no way be interpreted as the government of Ecuador interfering in the judicial processes Kingdom or Sweden," it said.

WikiLeaks founder Julian Assange will soon launch his show "The World Tomorrow" on Russia Today. DW spoke with Professor Richard Keeble of the Lincoln School of Journalism in the UK, about the debut episode. (20.04.2012)

The British high court's unanimous ruling against Assange means that he has exhausted his legal options in the United Kingdom. His only remaining recourse is to appeal his case before the European Court of Human Rights in Strasbourg, France.

Assange's lawyers have until June 28 to file an appeal before the Strasbourg Court.

Ecuador had offered Assange permanent residency in 2010. The country's deputy foreign minister, Kintto Lucas, said at the time that his government was concerned about some of the revelations WikiLeaks had made about other countries, particularly those in Latin America.

"We are open to giving him residency in Ecuador without any problem and without any conditions," Lucas said in 2010.

"We are going to try and invite him to Ecuador to freely present, not only via the Internet, but also through different public forums, the information and documentation that he has," he added.

Ecuador's leftist government, led by President Rafael Correa, has often been at odds with the United States and has close ties to Venezuela.

WikiLeaks later published more than 250,000 US diplomatic cables. Private First Class Bradley Manning, an American soldier who served in Iraq, is facing trial for allegedly leaking the cables to the whistle-blower site.

Assange has expressed concern that should be handed over to Swedish authorities, he could be extradited to the United States for prosecution.