His image of a lone man confronting a column of tanks has come to symbolize the Tiananmen Square crackdown in 1989. Photojournalist Jeff Widener tells DW the story behind the picture and how it has impacted his life. 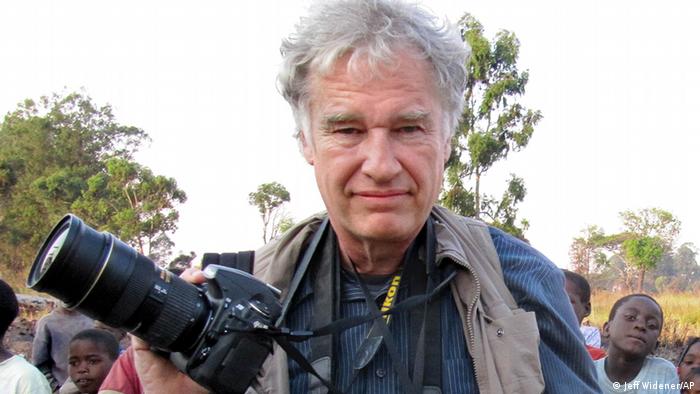 In June 1989, several thousand Chinese college students and disgruntled citizens from all walks of life gathered in Beijing's Tiananmen Square to publicly mourn the death of purged high-level official Hu Yaobang, as well as demand government accountability, freedom of the press, and a stop to the rampant corruption affecting the country. As demonstrations escalated, the Chinese government deployed the military to crack down on the pro-democracy movement, opening fire on unarmed civilians and killing an estimated several hundred of them, though official figures have never been released.

Amid the fear and confusion one man stood out when he stepped in front of a column of tanks passing through the square. The fate of the man, known today only as "Tank Man," has intrigued many, but especially the man who caught this historic moment on film, Jeff Widener (main picture). In a DW interview, the American photojournalist says that he only became aware of the historic significance of his photograph years after the incident and explains how the image contributed to him finding happiness in his private life.

DW: What is the story behind the "Tank Man" photo?

Jeff Widener: In the morning of June 5, the day after the crackdown, I got a directive from Associated Press in New York to try to photograph Tiananmen Square which had already been occupied by the military. This was quite a challenge considering the events that had taken place the day before.

As the closest vantage point was the Beijing Hotel, I got on a bicycle and somehow managed to get past the security guards. After sneaking into the hotel with the help of an American college student, I managed to get one fairly sharp frame from the 5th floor balcony with an 800 millimeter focal length lens. By the end of the day, not only had I captured the image of Tiananmen Square, but also come out with a bonus: "Tank Man."

I think it's a guy who was probably out shopping and who might have been involved in the incident of June 4. He might have had a girlfriend who was killed or injured during the riots. I think he might have just had enough. He walked out on the street, saw the tanks coming, didn't care much about himself and just wanted to make his thoughts felt. 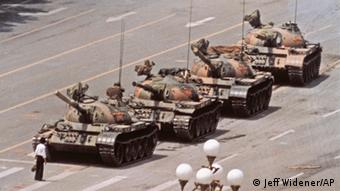 What do you make of his actions?

I think his actions were incredible, simply mind-blowing. Everyone says he was courageous, and I agree with that. But sometimes I wonder what his frame of mind was.

If he was emotionally distraught due to the killing of a friend or relative, perhaps, at that moment, he wasn't thinking about himself. Maybe he was just reacting to his emotions, and in such cases, nothing else matters in the world except for one's loss.

What do you think happened to him after he was pulled away by four men?

We may never know. I do believe, however, that somebody knows, and they are not telling us.

What was it like in Beijing on the day you took that picture?

Nobody wanted to go out on the streets. Everybody was scared, after the events of the past few days. For instance, I thought I was going to die in the night of June 3 when I was knocked silly from a stray protestor brick that hit me in the face.

I was also scared to death when later on, a truckload of soldiers came by and they opened fire. I ran like a scared school girl all the way to an alley, but about half way there I had to stop because I was panting. I thought to myself: "I'm going to die because I am out of shape." That was one of the worst experiences I had during those days and I ended up pounding at the door of the US Embassy. When they finally let me in, I was literally trembling and shaking. It's a miracle I got through that alive.

This, however, was not the first time you experienced conflict firsthand. Are you comfortable working in potentially dangerous situations?

Through the years, I have covered assignments in over 100 countries involving civil unrest and wars to social issues. I have always liked to be scared, and going into scary places. I just don't like the feeling when I am being shot at. However, I do enjoy all the recognition I get for getting the images.

What was going through your mind when you took the "Tank Man" picture?

The first thing I thought was that this man was going to screw up my composition. Then I was just shocked like everyone else. I assumed he was going to be killed. But he wasn't, and that's when I decided to get a lens that would double my focal length as the event was happening far away. I thought it was an amazing experience.

When did you realize that you had taken a historic picture?

I knew pretty quickly that the picture had made an impact. The newspapers and magazines around the world were running it half page. But I think it didn't really sink in until later when AOL selected it as one of the top ten most famous images of all time, next to photographs of the moon landing, and the crash of the German passenger airship Hindenburg. It felt like a bolt of lightning hit me when I saw it. I then realized I had done something really special.

What do you make of the fact that your picture is still banned in China?

It is an embarrassment to the Chinese government. I don't understand why they just don't come clean. Mistakes were made on both sides of the fence and they are not fooling anybody. It's almost comical that the picture is still banned. Everybody knows about it.

Where there is a will for knowledge, people are going to find out. After some of the greatest tragedies in history, eventually the countries involved have come out, apologized and shown the way forward. But this just doesn't seem to be happening with the Chinese government. Maybe someday it will happen.

How has the "Tank Man" photo impacted your life?

In some ways it has been a blessing and a curse. As a photographer, you'd also like to be known for your other work and not only for what was basically a lucky shot. I'm hoping that some day my other work will also be recognized, but I am certainly not complaining as the image has helped my career and opened a lot of doors for me. 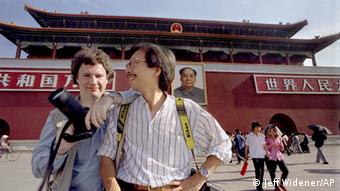 "In some ways the Tank Man photo has been a blessing and a curse," says Widener, seen here (L) in Beijing in late May 1989

Privately, it has changed my life because it led me to Corinna. After the BBC flew me into Beijing for a documentary on the 20th anniversary of the crackdown, I found myself one day walking down the Chang'an Avenue Boulevard where I saw a German woman sitting on the side of the street.

I chatted her up and we ended up in an old tea house during a rainstorm. About five hours later we realized we were in love with each other and got married the following year in Honolulu, Hawaii. If somebody had told me during those blood-soaked clashes that I would come back to the same place twenty years later and meet my future wife, I wouldn't have believed it.

What are your plans for the future?

I'm currently working on my archives and a photo exhibition in Italy. But I am also focusing on two book projects: one about my years in Bangkok for Associated Press, and another about Hawaii. These things are keeping me pretty busy. When that's done, we'll see where it goes.

Jeff Widener is an American photojournalist. His famous image of a lone man confronting a column of tanks during the June 1989 Tiananmen Square uprising made him a nominated finalist for the 1990 Pulitzer Prize. Widener currently freelances out of Hamburg, Germany.