Starting elementary school is a big deal in Germany. It's a rite of passage - almost like graduation or a wedding. Parents invest lots to shower their first-grader with gifts. But what's with the obligatory paper cone?

The first day of first-grade is a turning point in the life of every German child - and family. Elementary schools here begin with grade one, not kindergarten or pre-K, so there's a clean break between daycare and the 12 or 13 years of education that follow. And that's enough reason to celebrate big time.

In the gallery above, find out which rituals are associated with starting elementary school. By far the most important is the so-called "Schultüte," literally school bag or cone." Folklore expert Christiane Cantauw told DW why the cone tradition began, what goes into them and how new refugee children are getting to participate in the tradition.

DW: Is the thought of starting school so foreboding for Germans that they have to console themselves with gifts like the Schultüte - a paper cone full of sweets and presents?

Christiane Cantauw: That's a good question, but that's not what the tradition is about. Rather it's about making clear that a child's status is changing. This transition is associated with many changes for the child and for the family and that's what people want to emphasize with the ritual.

Watch: German learners guess the meaning of these 5 funny idioms

Can you explain when the school cone tradition began and why? 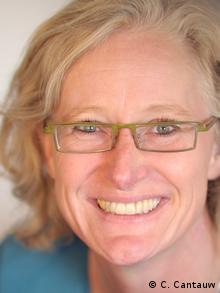 The first written references date back to the late 18th century. At that time, there were no pre-made cones. Instead, people used the paper cones that were used in shops to wrap up sweets.

The early references come from what is now central Germany in the regions of Thuringia, Saxony, Saxony-Anhalt and perhaps also Rhineland-Palatinate. Those are the main areas where the tradition has spread - they form a kind of belt across the middle of Germany. Those are also the regions in which very elaborate traditions have developed around the school cone.

The cone itself is not a tradition, it's an element used in a tradition and it's also simply packaging. It's sometimes also presented to young adults starting vocational school as well. That shows that it's seen as a symbol for a new beginning.

What was put in the early school cones?

Back then, usually the same things that are put in the cones today. Then it was called "Zuckerzeug" - literally "sugar stuff," or basically candy. Today, you'll find sweets, things to play with and school supplies.

Watch: Dos and don'ts when celebrating a birthday in Germany

Was the tradition carried on continuously over the past couple of centuries despite the World Wars and other major historical interruptions?

In the main regions where it's been practiced, people tried to continue with it because they placed a lot of value on the tradition. Of course during the World Wars it was problematic finding enough things to put in the cones - particularly for the poorer parts of the population. But people were inventive.

The school cone is really just a container, which means you can't look inside of it. And it's not opened at school but afterwards at home. That means that if I'm financially not in a position to fill up the cone with presents, I can fill it out with extras. So people threw in potatoes or paper. In one instance, I read that a wooden shoe was put in the bottom of the cone. But we can see that this symbol for school beginners was so important that no one wanted to do without it.

Economically speaking, Germany is doing relatively well right now. How has the school cone tradition changed over the past few years?

As with many things, it's been exaggerated. People spend an incredible amount of money on it. For the cone alone, they spend between 3 and 40 euros ($3.40-45.30). I conducted a small and non-representative survey in Münster, which isn't one of the main regions for this tradition. Three-quarters of those polled said they made the cone themselves, while one-quarter said they bought it. 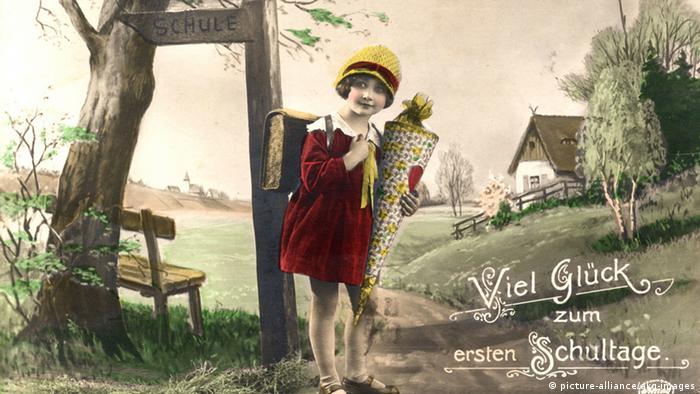 The cone is pictured in 1925 in Berlin

Then you have to pay for the contents as well. Those polled said they spent between 5 - although that was the exception - and 100 euros. That's a lot of money, but it's only the tip of the iceberg.

In the area where the cones are most common, people don't just give new first-graders one, but several cones. Then they also order a cake from the local bakery with the child's name on it. In Saxony-Anhalt, for example, that's very common. Since the 19th century, people have spent days baking and planning and organizing to celebrate with relatives and neighbors. And they also buy presents for their neighbors' children.

If you had to pack a cone this week for your own child, what would you put in it?

You can't get around adding school supplies, something to play with and sweets. I would try not to put in too much of everything. The important thing is that the child is surprised and feels included.

Christiane Cantauw is the director of the Folkloristic Commission in Münster. This interview was originally published on August 23, 2016.

Do you "spider" or "talk around the hot porridge"? In German, you can. Meet the Germans host Kate Müser asks bilingual colleague Michael Knigge to explain some of the best German idioms. (Watch for outtakes at the end.) (22.03.2017)

German is known for its long, hard-to-pronounce words. Join Meet the Germans presenter Kate Müser as she tracks down native speakers to help with the pronunciation of some of Germans' best tongue-twisters. (14.12.2016)