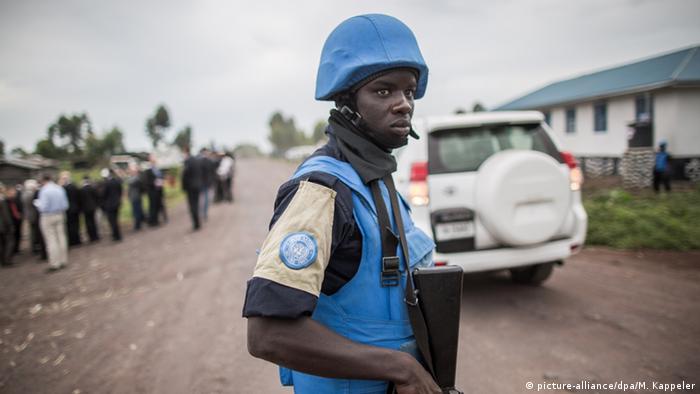 DRC's Foreign Minister Raymond Tshibanda told the UN Security Council that Kinshasa and the United Nations have been negotiating the peacekeeping mission's "orderly and definitive" exit. He noted that the army will send reinforcements in a few months to help its forces fighting rebels in the country's east, allowing the government to take full charge of the security in that region. DW's Africalink spoke to Christoph Vogel, a senior fellow at the Congo Research Group and a researcher at the University of Zürich in Switzerland

DW: What could be behind this call by DRC's government to reduce by half the number of UN peacekeepers in the country?

Christoph Vogel: The debate on the number of MONUSCO peacekeepers in DRC started a few years ago. The government developed a keen interest in reducing the number of the peacekeepers due to various reasons. It seems as the general elections nears, the government is not interested in having such a big MONUSCO force in the country, given the potential political trouble that may happen.

DW: Relations between the DRC government and MONUSCO have suffered recently, what risks does the lack of cooperation between DRC and MONUSCO pose?

There are a number of risks attached. Obviously, the 20,000 peacekeepers currently in DRC are a vital part of the joint strategy to disarm several dozens of rebel militia groups that are based in the eastern part of the country. Other than that, since the general security situation in the country is not as good as it should be, MONUSCO has passively been a stabilizing factor through its presence. Especially in areas where it is most visibly deployed like Kinshasa, Goma and Bukavu.

The UN mission which helped stabilize the DRC has been operating since 1999, isn't it time to let the Congolese determine their own destiny?

Obviously yes, that's how things should be. MONUSCO's own track record is a pretty mixed one, the mission has never fully succeeded in fulfilling its mandate so there has been valid criticism, especially with the recent violence, for instance, in Beni area in North Kivu, eastern Congo. But on the other hand, MONUSCO has played a valuable role. All that links to a larger discussion on peacekeeping in general, whether or not it makes sense to have such a massive and costly mission deployed that in the end has a rather limited success in terms of its mandate. From the political point of view, there is obviously the question whether or not UN peacekeeping missions should be in a country for such along time, it's definitely a mixed bag.

The DRC government has said it doesn't want outside forces to influence its elections calendar – Elections are scheduled for November this year but the chances of them taking place are growing dimmer – what do you foresee taking place bearing in mind the political impasse in DRC?

I think we need to see what the new MONUSCO mandate looks like and that should be decided in the coming weeks, most probably end of March. But generally, there might be further troops reduction because that has been the plan for the last couple of years, although not major reductions just minor ones, but bearing in mind the increasing political tension that surrounds the scheduled general election, it's obviously a very critical juncture for the Congo right now. The question is whether these elections will be organized in due time and in due tranquillity or whether the country returns to the state of outright political crisis. In that case, although the mission has been in the country for so long, it could be a very important moment for international assistance and stabilization.

In the second attack within 48 hours, two Tanzanian UN peacekeepers have been killed in an ambush in eastern Congo. Their unit was attacked in an area where Islamist Ugandan rebels are active. (06.05.2015)