Why bookstores are thriving in socially conscious Berlin

Germans like to give books as Christmas gifts. But that's not the only reason the number of bookstores in Berlin is actually growing, despite the threat of ebooks and online discounters. 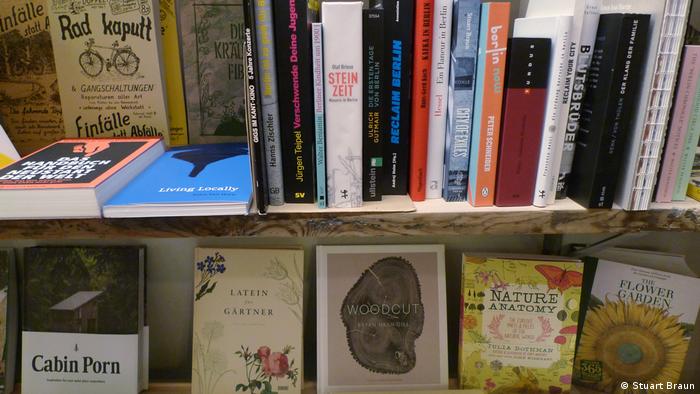 In other cities I visit, subway commuters seem to universally stare at their phones these days. Is this due to some Luddite disdain for technology in the German capital? Or does it align with the fact that, after money, books are the most popular Christmas gift in Germany? Some 49 percent of Germans are putting books under the tree this year, while 54 percent are giving money, according to retail statistic service handelsdaten.de

Is Berlin simply a last holdout for "Dichter und Denker" - poets and thinkers who hold the printed book sacrosanct, and who would not deign to forfeit valuable reading time by consuming fake Facebook news on their smartphone?

Get out on the streets, among ubiquitous local bookstores that are a rich thread in Berlin's urban fabric, and all this page turning shouldn't be so surprising. Despite the rise of the predatory online and mass-market bookseller, the dark specter of Amazon that has caused roughly one-third of indie bookstores in Britain to close in the last decade, Berlin is undergoing an analogue reading renaissance with more owner-run bookshops opening than shutting in recent times.

More so, these stores often display quirky curated collections that reflect a commitment to culture and ideas rather than bestsellers, an individuality that is borne of Berlin's diversity. 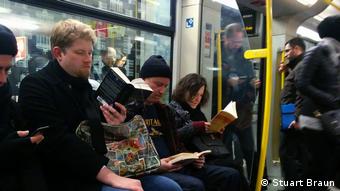 Does this happen in your city, too?

According to the German Publishers and Booksellers Association, independent bookstore numbers in Berlin grew from 299 to 352 between 2011 and 2016. On a national, and even Europe-wide scale, this is unprecedented.

"While in many cities of Germany, the deserted inner cities are becoming book-free zones," commented the book industry association, "a lively scene of young, owner-managed bookshops has developed in Berlin." 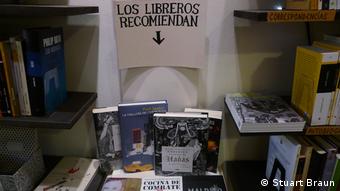 Bartelby & Co. is a Spanish-language bookstore that also specializes in Spanish vermouth

I recently attended the three-year anniversary party of the Berlin district of Kreuzberg's Zabriskie bookstore (pictured at the top), which is devoted to books and magazines about culture and nature, and sub-themes like utopian societies, counterculture and the avant-garde. It was approaching midnight and the small shop was packed with people sharing stories, passing books around or dancing to the DJ's tracks, a community built through an intimate dialogue that cannot be replicated online.

Zabriskie's co-founder, Lorena Carràs, says some friends were dubious when she and partner Jean-Marie Dhur decided to open shop in 2013, and to focus on lovingly designed titles from small publishers, many from Berlin. There was a sense that people don't buy analogue books any more, and that the future was digital.

But Zabriskie has developed, in part through regular readings, concerts and city nature walks that start at the store, a local literature ecosystem in which the printed book can prosper. It also helps that the rent, for now, remains relatively affordable.

Carràs admits, however, that Zabriskie could not compete without the German law that fixes book prices. In effect since 2002, it ensures that every bookstore in the country, and even online giants like Amazon, must charge the same price for new books. This means that, unlike in England or the US, for example, large chains and online stores can't discount and undercut small local booksellers.

Leaving the algorithm behind 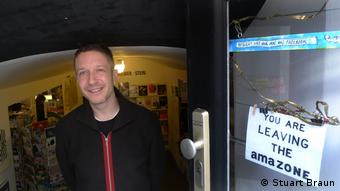 Visitors to Hundt, Hammer, Stein bookstore in Berlin's central Mitte district are greeted by signs reading "you are leaving the Amazone" and "leave your algorithm, browse offline," before descending stairs into a cozy book basement that features a finely curated selection of both German and English literature.

Owner Kurt von Hammerstein says with some glee that the big chains that decimated indie booksellers in the 1990s are now struggling to compete with Amazon on mass market titles, forcing them to shut down outlets across Germany. This has left fertile ground for the innovative indie bookseller.

Opened in 2004, Hundt, Hammer, Stein is one of the oldest stores in its street, and survives in large part through customer loyalty, but also political awareness. Hammerstein says that "a very high critical mass" of concerned Berliners refuse to support sellers like Amazon that are perceived to underpay workers while dodging taxes.

Ana S. Pareja, co-founder of Bartleby & Co., a Spanish-language bookstore in Berlin's Kreuzberg district, also talks about a "political conscience" that allows her loyal clientele to "understand the richness and importance of a local business like this."

Loyalty from customers and authors

Perhaps this is why Paul Gurner, who founded St. George's English bookstore in Prenzlauer Berg in 2003, says he pays his staff almost twice the minimum wage - despite the fact that he has to match Amazon on a huge range of used books that are not price fixed. 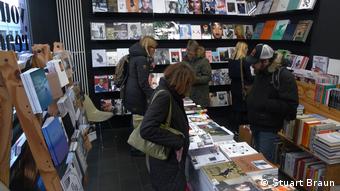 Times are good for bookstores, says Jessica Reitz, co-owner of Do You Read Me?!

"We've got customers who've been here since the start and they keep coming back," he says. Once filling the store weekly with readings and film nights, these days the rustic local shop that overflows with new and used English books (arguably the largest selection in Germany) is too busy selling literature to stage regular events.

At indie magazine and book store Do You Read Me?!, the renowned collection of niche art, architecture and literature magazines attracts legions of regulars. Talking to co-owner Jessica Reitz as she wheels a trolley of books and mags into the compact, crowded Mitte store, she says that no one will get rich doing this, and that online competition is increasing. But times are relatively good.

As people leave the Do You Read Me?! counter with volumes from new creative publishers from around the world, it's good to know many will be unwrapped on Christmas and soon enjoyed on the train ride home.

Watch DW's feature film, "Gutenberg in the Cyberstorm: The Value of the Book in the Digital Age."

Arts.21 - Special: Gutenberg in the CyberstormThe Value of the Book in the Digital Age

There are some books you just can't put down. They are the titles we depend on and that stay with us for the rest of our lives. DW presents 10 German classics recommended by the avid readers in the culture department. (07.12.2016)

India's book publishers are facing a myriad of challenges — from heightened production costs to a reduction in the kinds of books consumers are willing to read.