Who let the bugs out?

For many, insects are the stuff of nightmares. But these fascinating creatures are a vital part of our ecosystem. We rely on insects like bees to pollinate many of our vegetables, fruit, and flowers. Others help keep our environment clean by breaking down waste and dead matter. Yet for all their benefits, some insects spread disease. Explore our interactive graphic to find out more about the creepy crawly world around us.

Have you ever wondered what it must be like to be a bug? Almost universally hated, dodging flyswatters, traps and pest control — or having people run away from you screaming. It's a tough life.

But considering how bad some insects are for human beings, it's easy to understand why they act as they do. For instance, malaria spread by mosquitos is one of the deadliest killers known to humankind. Some scientists believe the disease is responsible for half of all human deaths since the Stone Age. Then there are wasp and bee stings, either a mere painful annoyance or — if you're allergic — potentially deadly.

Still, there's more to insects than that. They've been around for hundreds of millions of years and are probably the most successful, not to mention numerous, animal group on the planet. Without insects such as the bee, with its pollinating abilities, we wouldn't have much of the delicious fruit we love to eat. Other insects control pests that damage food crops.

So, step into the wonderful and fascinating world of insects by clicking through our interactive graphic. You might be surprised at what you find out. 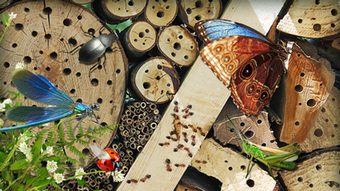