Who is former US Ambassador to Ukraine Marie Yovanovitch? | Americas | North and South American news impacting on Europe | DW | 15.11.2019

Who is former US Ambassador to Ukraine Marie Yovanovitch?

Marie Yovanovitch's hearing in the US Congress is likely to prove damaging to President Donald Trump. The former US ambassador to Ukraine was ousted in May following complaints from Rudy Giuliani and Trump's son. 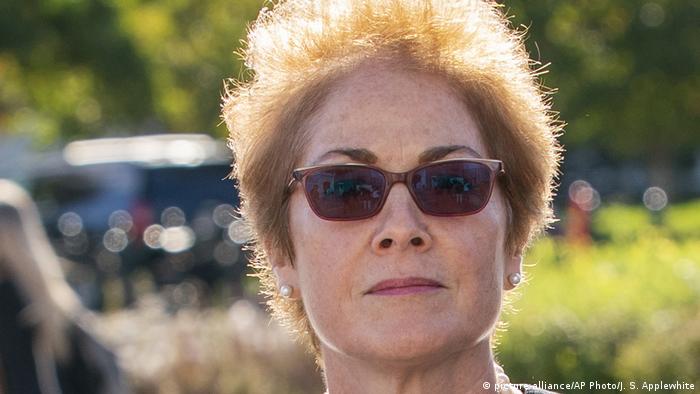 In the now notorious July 25 phone call between Donald Trump and his newly elected Ukrainian counterpart Volodymyr Zelenskiy, the US president kept his judgment of Marie Yovanovitch — or, as he referred to her, "the woman" —  to two words: "bad news." He then added, with a hint of foreboding: "Well, she's going to go through some things."

The call happened two months after Yovanovitch, appointed by President Barack Obama in 2016, was recalled by Trump, apparently following complaints from his personal lawyer Rudy Giuliani and his son Donald Trump Jr. that she was blocking attempts to investigate the son of his political rival Joe Biden.

The 60-year-old diplomat will on Friday give her account of the affair in Trump's impeachment hearing before Congress, which has already released the deposition she gave to three Congress committees on October 11.

Yovanovitch's career suggests Trump may have made a formidable enemy.

Considered one of the State Department's most accomplished diplomats, she represented the US in two other former Soviet countries under President George W. Bush — Kyrgyzstan from 2005 to 2008 and then Armenia from 2008 to 2011.

Her ouster prompted consternation among professionals in the US State Department. Various US media outlets have reported several career diplomats expressing outrage at her sacking.

Yovanovitch was born in Canada to Soviet emigrants who fled the Soviet Union and then Nazi Germany. She grew up speaking Russian and is still informally called Masha, but became a naturalized US citizen at 18.

Nick Connolly, head of DW's Kyiv studio, described Yovanovitch as a reserved character who maintained an impeccably professional image in her public appearances. This makes her an obvious contrast to Trump appointees such as Richard Grenell, the US ambassador to Germany, who has riled some German politicians with his more confrontational style.

One of her predecessors, John Herbst, described her to the British Guardian newspaper as cautious and meticulous by nature and as "someone with great integrity."

There is evidence that she may not have been best of friends with Zelenskiy when he was presidential candidate: The latter, in the same phone call with Trump, was quoted as saying: "It was great that you were the first one who told me that she was a bad ambassador, because I agree with you 100%. Her attitude towards me was far from the best, as she admired the previous president [Petro Poroshenko] and she was on his side. She would not accept me as a new president well enough."

During her tenure, Yovanovitch may also have incurred the hostility of Ukraine's Prosecutor General Yuriy Lutsenko by keeping up pressure on the government to maintain its anti-corruption drive.

In a speech in March, she accused the Poroshenko administration of not doing enough to tackle corruption, and Yovanovitch also blocked a US payment to Lutsenko's office over failure to make anti-corruption reforms.

Lutsenko alleged that she made a "do-not-prosecute" list and disseminated it in Ukraine, an accusation that she strenuously rejected and which Lutsenko himself retracted.

Lutsenko is himself deeply implicated in the Ukraine scandal and has been accused of colluding with Giuliani to launch investigations in Ukraine into Trump's political enemies, specifically Joe Biden's son Hunter.

For her part, Yovanovitch has vehemently denied any notion that she may be partisan against Trump, though she expressed her "deep disappointment and dismay" at the way events unfolded. She added that her removal had shaken her belief in the "basic understanding" that "our government will have our backs and protect us if we come under attack from foreign interests."

"Today, we see the State Department attacked and hollowed out from within," she said. Her hearing on Friday could prove explosive.

In the latest testimony given to the impeachment inquiry against President Donald Trump, the former US ambassador to Ukraine said he "put pressure" to remove her from her post. (11.10.2019)

For the first time on Wednesday, hearings for the impeachment investigation into Donald Trump will be held in public, on live TV. Those testifying are unlikely to have anything good to say about the president. (13.11.2019)