WHO calls for 30 kilometer per hour speed limit in cities With the UN launching its Global Road Safety Week on Monday, the WHO head Tedros Adhanom Ghebreyesus advocated a speed limit of 30 kilometers per hour in cities and towns. In the countries using the imperial system, such as the US, the speed would be capped to 20 miles (32.2 kilometers) per hour.

"Road traffic crashes are the leading cause of death for children and young adults," the WHO chief said in a video message endorsing the Streets for Life campaign. The campaign is also using the Love30 hashtag on social media.

The UN officials hope to protect the lives of pedestrians and cyclists where they mix with motor vehicles.

"As we recover and rebuild from COVID-19, let's build safer roads for a safer world," Tedros said.

According to the information shared by the WHO, one person dies in a road traffic crash every 24 seconds. About one-third of those deaths can be traced to excessive speed. The WHO believes that every kilometer per hour over the speed limit increases the risk of a fatal crash by 4-5%.

With the coronavirus pandemic keeping people at home, the number of traffic crashes has dropped since early last year. However, the number of fatalities did not go down accordingly. According to the WHO, more drivers took the chance to speed due to largely empty roads, so the crashes that happened were more severe.

Thousands of children harmed every day

In the Monday briefing, Tedros was joined by Zoleka Mandela, who serves as the Global Ambassador for the Child Health Initiative.

"Today and every day, 3,000 children are killed or injured on the world's roads. This is a crisis that is man-made and is entirely preventable," she said. 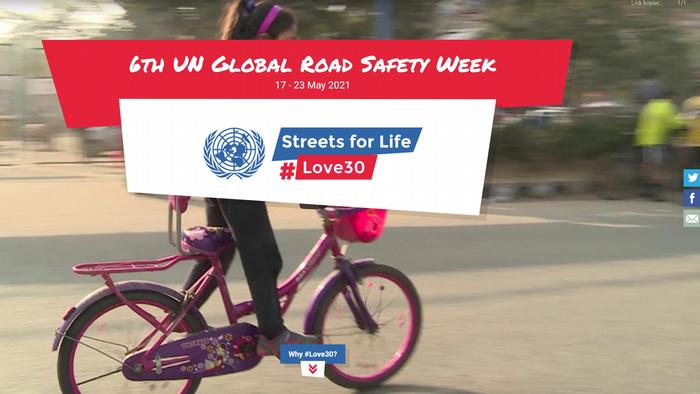 Mandela, who is the granddaughter of South African civil rights hero Nelson Mandela, lost her own 13-year-old daughter in a crash.

"My family has never recovered from this. No family ever does," Zoleka Mandela said.

Pushing for a global shift

Mandela pointed to cities like Brussels and countries like Spain, which are already committed to the speed limit. She called for a shift in "every single community and in every neighborhood around the world."

Supporters of the initiative hope to influence policymakers ahead of a high-level UN meeting next year, where world leaders are set to discuss road safety.

Why Germans love no speed limits on the Autobahn