Who are the Ahmadiyya Muslim Jamaat? | World| Breaking news and perspectives from around the globe | DW | 07.07.2019

Who are the Ahmadiyya Muslim Jamaat?

The Ahmadiyya Muslim Community, the world's largest organized Muslim community, is celebrating its annual congress in Germany, where many of its members live. DW profiles the professed liberal Islamic organization. 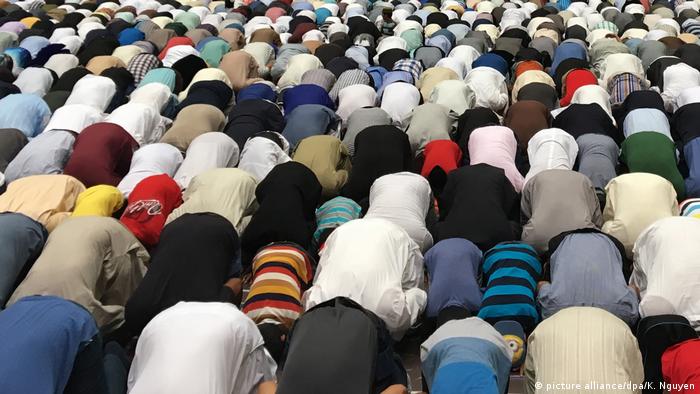 More than 43,000 members of the Ahmadiyya Muslim Community are gathering in Karlsruhe, Germany, for their annual meeting. Through Sunday, participants will pray, but also discuss current issues, such as integration. A spokesman for the organization said the leader of the international group, Caliph Mirza Masroor Ahmad, will address the topic.

The Ahmadiyya Muslim Jamaat (AMJ), as the organization is officially known, was founded in British India in 1889. Comprising roughly 12 million members from 204 countries, it is the largest organized Muslim community in the world. Nevertheless, the AMJ does not make up a majority in any of the world's Islamic countries. Rather, they are in the minority wherever they live.

According to the AMJ, which is headquartered in London, some 40,000 of its members live in Germany. It also claims to be the fastest growing Muslim reform group in the world.

Read more: 'Muslims in Germany have rights and obligations'

The movement was started by the reformist theologian Mirza Ghulam Ahmad (1835-1908). Born in the Punjab province in what was then British India, the preacher saw himself as a "follower prophet" ("Zilli Nabi") and a messiah, which the Ahmadiyya also equate with a "Mahdi," or one who is guided by God. As such, he is said to have received revelations from God. Other Muslim communities reject his claim, and differences between the Ahmadiyya and various other Muslim groups can be traced back to that conflict. 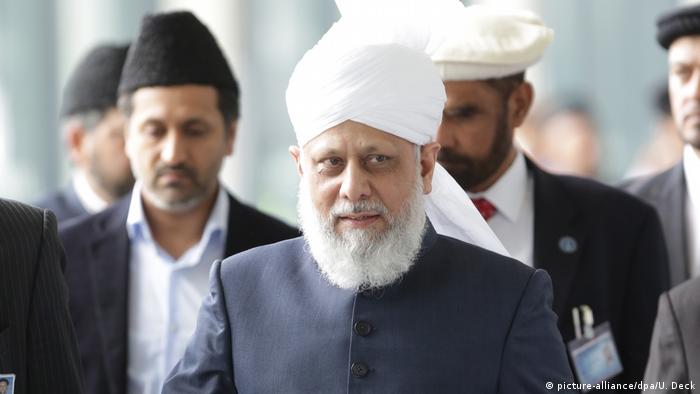 Mirza Masroor Ahmad, the fifth caliph, lives in exile in the UK

The founder's contentious claim also led to rifts within the Ahmadiyya itself, and eventually to a split within the AMJ after Ghulam's death. One group, which disputed the leader's claim of being a prophet, settled in Lahore. Those convinced of the veracity of Ghulam's claim founded a "spiritual caliphate" in Qadian, his birthplace. His current successor, Mirza Masroor Ahmad, the fifth caliph, resides in London.

The first Ahmadiyya settled in Germany in the early 20th century, and the group has operated mosques in the country since the 1920s. Many Ahmadiyya also relocated to Germany when the group was banished from Islam in Pakistan in the early 1970s.

The Ahmadiyya became a legally registered organization in Frankfurt in 1988. Its members largely ascribe to the tenets of the Qadian Ahmadiyya — that is, they acknowledge Ghulam's claim that he was a prophet.

On its website, the Ahmadiyya Muslim Jamaat claims to be the only Islamic movement to be led by a wholly spiritual caliphate for more than a century. "The caliph of the AMJ, His Holiness Hadhrath Mirza Masroor Ahmad, is the world's most important Muslim leader," the group claims.

Read more: Everyone is welcome at Berlin's Ibn Rushd-Goethe Mosque

According the group's German website, it is committed to the "founding values of Islam." Among these, the group lists "mercy and charity toward all people, absolute justice, equality between men and women, the separation of church and state and the end to all violence carried out in the name of religion, as stated in the Quran."

The Ahmadiyya also staunchly advocate integration, both for individuals as well as associations. Thus, AMJ chapters became statutory bodies under public law in the German state of Hesse in 2013 and in Hamburg in 2014. Moreover, the AMJ also partners with the government of Hesse in organizing Islamic religious studies in state schools.

Yet Necla Kelek, a prominent Turkish-born social scientist and feminist who lives in Berlin, rejects the group's characterization of itself as a liberal organization. She says that although the group presents itself as such outwardly, members interpret the Quran and the Sunna, laws based on the teachings of Muhammad, as the literal word of Allah.

"That means the world is divided between believers and infidels, just as it is in the most archconservative strains of Islam," says Kelek, adding that despite claims to the contrary, men and women within the community are strictly separated from one another.

The Ahmadiyya Muslim Jamaat's homepage, however, presents the movement as one of tolerance, quoting: "There shall be no compulsion in religion" (Quran 2.256).