WHO announces progress on Ebola, less deaths than thought

According to the World Health Organization, Liberia and Guinea have met a target for preventing Ebola’s spread. The WHO’s assistant director-general says Sierra Leone has fallen short but could get on track shortly. 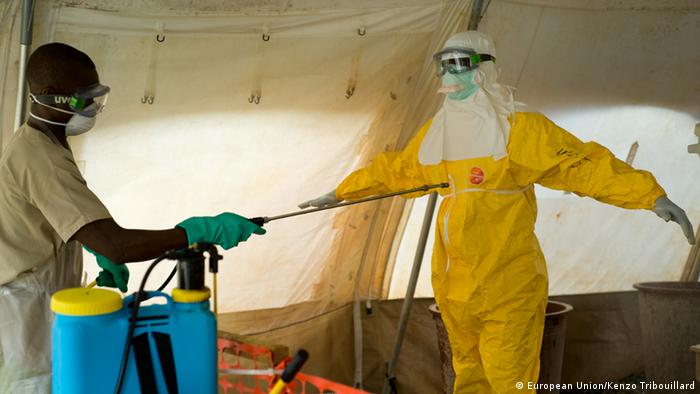 Revised data released by the World Health Organization (WHO) on Monday revealed that there were nearly 1,000 fewer deaths caused from Ebola than had been reported over the weekend, putting the death toll at nearly 5,700.

"Liberia's figures came in but they've since said these were actually non-Ebola deaths that were reported as part of our Ebola deaths and we will be taking them off. So the whole world went up and the whole world will come down again," WHO Assistant Director General Bruce Aylward told reporters.

The new figures published on Monday put the death toll in Liberia at 3,145 - as opposed to 4,181, as reported on the weekend. In Sierra Leone, there were over 1,500 deaths and in the third-worst hit country, Guinea, there were 1,312 deaths.

The WHO's Aylward told reporters in Geneva that the WHO's ambitious plan to stop the deadly Ebola outbreak in West Africa has shown it possible to quickly reduce the "yawning gap" between disease levels and the capacity to respond. Speaking at a press conference on Monday, Aylward said both Guinea and Liberia had met a WHO target of isolating 70 percent of Ebola cases and safely burying 70 percent of those who die by December 1.

Aylward added that Sierra Leone still did not yet have enough beds in treatment centers to isolate Ebola patients, but had probably met the targets in the west of the country. He said he expected levels nationwide to improve "in the coming weeks," with many new facilities scheduled for opening in that time frame.

"That capacity at the district level is strong and getting stronger in Sierra Leone, and that's why I think the prognosis is actually very good," Aylward said at the press conference on Monday, praising the government's efforts to combat the epidemic. Aylward added, however, that all the good news "doesn't mean you're automatically going to get to zero" cases and eliminate unsafe burials without more cooperation among responders.

Ebola has infected nearly 16,000 people, almost all of them in the three West African countries and nearly 5,700 people have succumbed to the virus since the outbreak of the epidemic around February this year.

The hemorrhagic fever can be treated but has no surefire cure, though a new vaccine has shown promise in recent trials. Ebola spreads through contact with bodily fluids.