Where Now for Atomic Waste?

The biggest transport of radioactive waste ever starts its journey from France back to Germany on Monday night. The government doesn’t know where to store it, though, and it can’t afford to find a final disposal site. 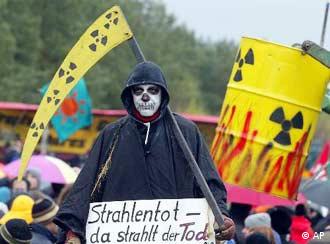 Demonstrators take to the streets to oppose nuclear waste transport

Twelve nuclear waste receptacles are scheduled to start their journey back from La Hague in the French state of Normandy to Gorleben in Germany's Lower Saxony on Monday. Sent abroad for reprocessing by German nuclear plants, the radioactive material is now returning back home for storage.

The event is being met with protests in the form of a costumed carnival parade on the market square in the town of Dannenberg. Demonstrating against castor transports (an acronym for “cask for storage and transport of radioactive material") has become a tradition for people in Lower Saxony. Not only that, but over the past several decades the anti-nuclear movement has shaped Germany’s culture of protest.

In 1979, for example, 100,000 protesters forced the government to drop its plans to build a processing plant in Lower Saxony. Another high point was reached in April 1995, when the first castor transport rolled through Lower Saxony, accompanied by the then biggest police presence in German postwar history. Still, demonstrators have never managed to turn a castor transport back.

Ever since Germany’s coalition government of Social Democrats and Greens and the country’s energy providers agreed to scrap nuclear power plants, the number of protesters has shrunk considerably. Nevertheless the Saturday demonstration against the current castor shipment was attended by between 2,000 and 5,000 people, according to estimates from police and organizers.

Germany's problems of nuclear waste disposal are still far from being solved. Although the last nuclear power plant in Germany will be turned off in 2021, the issue of waste disposal has yet to be resolved. Gorleben, the country’s main storage facility for radioactive materials, wasn’t designed to be a permanent depot. But it may still end up that way.

“Above all the people here are afraid that with every new transport the decision for Gorleben as a final disposal site is cemented,” Heiner Bartling, the interior minister of Lower Saxony, told a Berlin newspaper. Bartling thinks the government is moving too slowly in the search for a permanent nuclear waste depot.

His fears seem warranted. The energy companies will already have spent 1.3 million euro on exploring the possibilities of developing Gorleben into a final disposal site by the end of 2002. Environmental Minister Jürgen Trittin of the Green party, however, has put a stop to any further investigation into Gorleben, with the aim of finding an alternative final site.

In 1999, Trittin set up a working group of 16 scientists, called AK End, to deal with the issue. By the end of this year AK End is supposed to present a list of safety criteria and rules of procedure for the search. According to Rainer Baake, state secretary in the Environmental Ministry, a final disposal site should be ready for use by 2030.

The decision for Gorleben was a political one, made in 1977. The then premier, Ernst Albrecht, saw the potential for creating jobs and attracting investment to Lower Saxony. Two years earlier a governmental study had already determined that Gorleben was not a good place for a final depot. In 1985 the first nuclear transport arrived in the town.

The problem is that the cost of finding a different final site would be at least as much as the energy companies have spent on looking into Gorleben so far. The federal government, hindered by a stagnant economy, doesn’t have the money to search. And the energy companies aren’t interested in paying.

Besides, Gorleben has Germany’s only pilot conditioning plant, used for packing radioactive waste into containers for permanent storage. The facility would be useless without a nearby final depot.

In the meantime, 151 castors of German nuclear waste will make the trip back from the reprocessing plants in La Hague and Sellafield, England, to Germany. The majority of it will go to Gorleben.

Germany has some 24,000 tons of highly radioactive waste to bury. Just where, however, is a problem still unsolved by the German government. (November 22, 2002)