A comedian might say it's his job to make fun of everything and everybody under the sun - the more wicked, the better. In Germany, a debate has broken out after a Muslim citizen filed suit over a comedian's jokes. 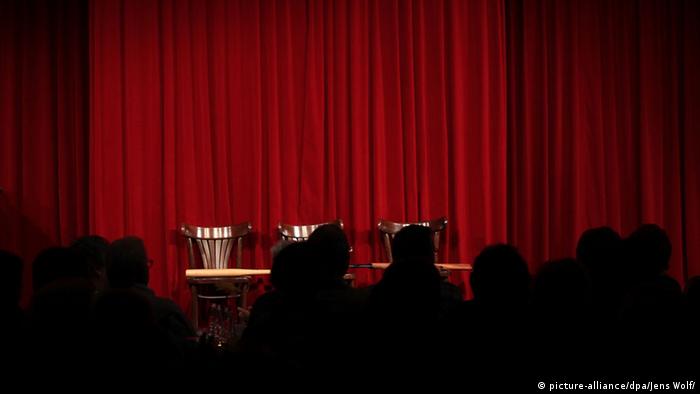 More than a few people will agree that comedians can say what they want - and the point is not to take things too seriously. No way, others retort: You have to be particularly considerate of people's feelings when it comes to religion.

Article 5 of Germany's Basic Law guarantees the freedom of expression. It also outlaws censorship. On the other hand, there's section 166 of the criminal code, which penalizes insulting religions and ideologies if such comments are "capable of disturbing the public peace."

But determining when the public peace is being disturbed is where things get thorny.

"The saying goes: Religion is the opiate of the masses. That's misleading. Opium is a mind-expanding drug," Volker Pispers, a popular German comedian, likes to quip.

There's a tendency in Western Europe to chuckle at or shrug off comments like that - even when a comedian offers more personal or even tasteless fare. But German law also draws the line at statements determined to incite hatred of minorities.

To laugh or not to laugh?

Western nations have their long and tangled histories when it comes to accepting religious criticism and even finding ways to poke fun at faith.

Examples of the latter are now rife. In comedy group Monty Python's film "The Life of Brian," the protagonist ends up revered as a Messiah due to a string of misunderstandings. German satiric magazine "Titanic" featured a cover picture in 2012 of Pope Benedict XVI with lipstick marks on his cassock and his cheek, and the headline: "The Pope stays clean!" 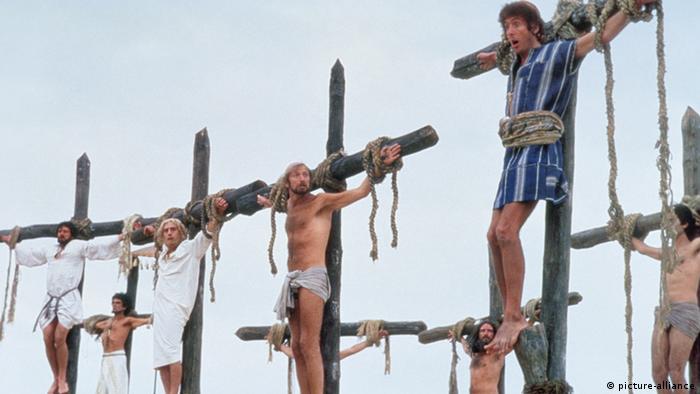 Brian sings on the cross: "Always look on the bright side of life

At the time, the Catholic Church was not amused. That same year, the archbishop of Bamberg demanded that blasphemy be criminalized. "People who offend a believer's soul with mockery must be put in their place, and even punished if necessary," he argued.

What the archbishop hopes for in Germany is already true for quite a few countries with a state religion. Blasphemy is punishable by death in Iran, Saudi Arabia and Pakistan.

When two societies' values clash, tensions can easily come to a head, such as in the debate over caricatures depicting the Islamic prophet Muhammad published in a Danish newspaper in 2005. Protests and violent riots erupted when they were reprinted in an Egyptian paper.

The Danish government faced a diplomatic crisis with the governments of several Islamic states. Kurt Westergaard, the cartoonist who created the controversial caricatures, received death threats from radical Islamists and has been under constant police protection through to the present.

The case led to a worldwide debate on freedom of expression.

In Germany, the cartoonist received the 2010 Potsdam Media Award for his unrelenting commitment to a free exchange of opinions. As a cartoonist, Westergaard was entitled to produce such drawings, German Chancellor Angela Merkel said in a tribute at the award ceremony, adding that Europe permits this form of expression. "The secret to freedom is courage," Merkel said and urged people to respect both the dignity and freedom of others.

The Central Council of Muslims in Germany promptly reacted to the chosen laureate. Arguing that the Danish cartoonist stepped on the toes of all Muslims, then Secretary General Aiman Mazyek said it was a highly problematic choice in a charged atmosphere. 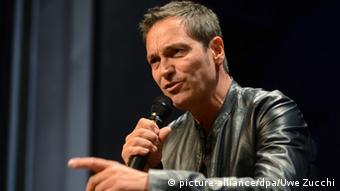 Now the issue has returned to the headlines in Germany, after a Muslim - Erhart Toka - from the German city of Osnabrück filed charges against comedian Dieter Nuhr.

Toka said the comedian instigated "dumb, stupid agitation" against Islam. He called Nuhr a "hatemonger," making reference to quips including: "Islam is only tolerant whenever it has no power," and "In Islam, it's true that women are free - first and foremost, in fact, they're free of having to decide everything."

"He's to the point, and he exaggerates," says Barbara Hornberger, a German cultural studies scholar specializing in pop culture. "You can say it's tasteless and not very helpful in the integration debate, but that isn't his job - this is about entertainment."

In such debates, people always say one shouldn't fan the flames, Hornberger says. But she counters that on stage, the sensibilities of individual groups are no criterion: "A comedian is not the Red Cross of pop culture."

She doubts Toka will be successful with his case, however, saying, "The file would already be collecting dust if it hadn't been for the media."

It's not the first time that a Muslim has criticized the popular German comedian's comments. Nuhr is one of the few comedians who dare to make jokes about Islam repeatedly - but he also targets Christianity. Nuhr says he is convinced that fear of radical Muslims restricts the freedom of opinion in the West. "For the first time since 1945, people have to fear being killed for saying the wrong thing, just because some cleric in Pakistan says so," he told "Die Welt" newspaper.

In a multi-cultural and globalized society, questions about how far is too far are bound to come up again and again. But it's a fact that the West's hard-earned basic rights guarantee the freedom of opinion - and they demand tolerance. As a consequence, no comedian should bow completely to any religious community.

True integration will have been achieved when comedians focus in equal measure on foreigners, Muslims, Christians and homosexuals, says Barbara Hornberger. She quotes German satirist Herbert Feuerstein: "Even the handicapped have a right to be the brunt of a joke."

A US federal court has condemned Colleen LaRose to 10 years in prison for plotting to wage jihad in Europe and South Asia. Known as "Jihad Jane," she plotted to kill a Swedish cartoonist for depicting Mohammad as a dog. (07.01.2014)

Izel Rozental treads a fine line with his political cartoons in an Istanbul weekly. The Turkish-Jewish cartoonist says buckling under pressure is out of the question - even when his critics are Turkey and Israel. (20.02.2013)