Wheelchair basketball: How disabled do you have to be? | Sports | German football and major international sports news | DW | 03.08.2020

Wheelchair basketball: How disabled do you have to be?

Germany's wheelchair basketball star Barbara Gross is no longer allowed to play for her country. Under new criteria established by authorities, Gross' handicap is no longer sufficient. The decision has caused outrage. 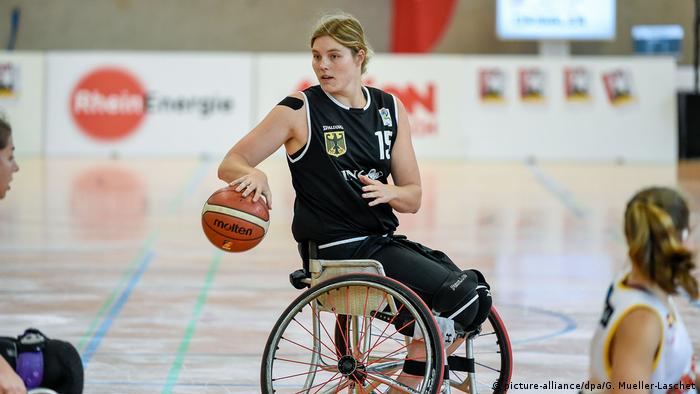 "We are fairly reassured that the team won't be torn apart, but at the same time we are shocked that a negative decision has been made," Mareike Miller, captain of Germany's wheelchair basketball team, told DW. "We are concerned about our teammate, for whom this news is terrible. We hope that we can appeal."

The teammate in question is Barbara Gross. In the last few weeks, the 26-year-old received a message from the governing body of wheelchair basketball (IWBF) stating that she was no longer allowed to play international basketball. Gross was one of nine athletes who fell through the net of the International Paralympic Committee's (IPC) "Classification Code." Due to the current proceedings, Gross does not want to comment.

Under instruction from the IPC, the IWBF checked the status of 132 wheelchair basketball players. Eleven of those were German, 10 were allowed to keep playing. One was not.

Up until now, Gross was in the category of "minimal disability." In her day-to-day life she does not need a wheelchair. After a bad traffic accident and many operations, Gross was no longer able to compete in 'walking sports,' so she began to play wheelchair basketball.

Since 2015, Gross has been a part of Germany's team and has won five medals at international competitions, including gold at the 2015 European Championships. At the Paralympic Games in 2016, she won silver with Germany and afterwards received the "Silver laurel leaf" from then federal President Joachim Gauck. The award is the highest sporting accolade in Germany.

Gross' removal from the sport has been met with great disapproval. "Until now, you were only thrown out of the sport if you had doped," said team captain Miller.

"Gross was approved to play our sport years ago, and was a part of the team in Rio. Now she's being treated as if she had done something wrong."

The sport's governing body sympathize with concerns about the IPC's rule changes: "The IWBF still believes in our classification philosophy and that the sport should be inclusive for all those with a recognized impairment of their lower limbs," said Ulf Mehrens, president of the association.

This is a sideswipe at the IPC, who, in February, threatened wheelchair basketball's expulsion from the Paralympic program should the association not implement the new, strict classification codes.

"Following several years of discussions with the IWBF to ensure its compliance, we needed to act," the IPC told DW, also explaining that they had taken action against the IWBF in January 2020 for its continued non-compliance with the 2015 IPC Athlete Classification Code, a rulebook that applies to every single Paralympic sport.

"No sport is above the rules that have been determined by the IPC membership and all along this process we had clearly stated to the IWBF that change must be made in advance of the Tokyo 2020 Paralympic Games." 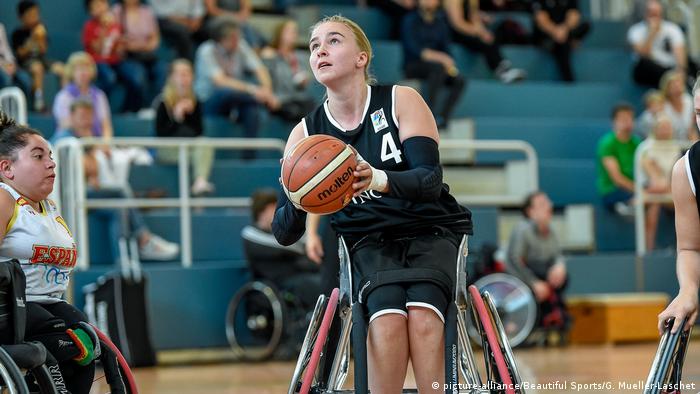 "Wheelchair basketball is one of the most inclusive sports in the world. It is unfair that individual athletes who don't fit into boxes designed by the IPC are being shut out," added Miller. "The medical situation isn't so different that there is a reason for this."

In short, those affected feel they have been blindsided.

"There was no warning whatsoever," Miller continued. "We were previously told that nothing would change in wheelchair basketball for now."

Friedhelm Julius Beucher, president of Germany's Para sports Association (DBS), has called for a "fair solution" to the situation. "To shut out people in a current Paralympic cycle is unacceptable."

The IPC said they are "sympathetic to the fact that nine athletes have been found non-eligible so close to the Paralympics. However, had the IWBF applied the rules of IPC Athlete Classification Code from 2015 like other Para sports, then the timing would not have been such as issue in relation to Tokyo 2020." 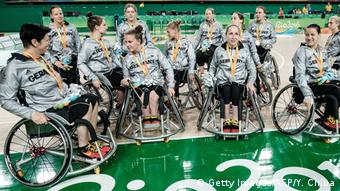 Germany and Groß won silver in Brazil in 2016

There's a points system in place to make sure the sport is run fairly. One point is given to those athletes who are severely disabled (e.g. paraplegic), while 4.5 points are for someone with a minimal disability (e.g. limited movement in hips, knees or ankles) and, in many competitions, even those without a handicap.

The total number of points in a five-person team cannot be more than 14 in an international team and 14.5 in a club team.

"Our society keeps being more inclusive. The perspective that only wheelchair users can play wheelchair sports is narrow-minded," said Miller. Her sport shows that it can be different, which makes the IPC's stance all the more unfortunate. "Tougher guidelines for wheelchair basketball makes it worse."

The IPC's classification system needs to be "discussed as soon as possible," she adds. "The Paralympic Games will only hurt itself in the long run if they become more and more exclusive."

One of the nine newly excluded international wheelchair basketball players is Briton George Bates, who has battled Complex Regional Pain Syndrome (CRPS) since his childhood. Doctors told him one option was to amputate the leg, which causes him chronic pain.

"As a result of the decision by the IPC I could be forced into reconsidering this heartbreaking option [amputation]," the 26-year-old said (see tweet above). First though, Bates wants to fight against his expulsion.

Editorial note: This article has updated to include the IPC's response.