What made Austria's Maria Theresa a one-of-a-kind ruler

Empress of Austria Maria Theresa paved the way for compulsory education in the 18th century, but also persecuted sexual immorality. A reformer and fierce ruler, Austria marks the 300th anniversary of her birth.

First of all, Maria Theresa (1717-1780) was never actually crowned empress. As the only female ruler in the House of Habsburg, she was the Archduchess of Austria and the Queen of Hungary and Bohemia.

Maria Theresa was only 23 years old when she ascended to the Austrian throne in 1740. Though the official ruler was actually her husband, Francis I, she governed the Habsburg monarchy single-handedly.

When her husband became the emperor of the Holy Roman Empire in 1945, Maria Theresa acquired the title of empress, as suits the wife of an emperor. The only female sovereign in the history of the House of Habsburg became pivotal during the era of enlightened absolutism, which served as a precursor to the Enlightenment and saw rulers in Europe increasingly valuing rationalism and supporting human rights.

No other woman of her time was painted as often as Maria Theresa, which not only had to do with her position of power. Her contemporaries described her as a very beautiful woman, especially when she was young. She had a round face, slightly reddish blonde hair, large, vivid, light blue eyes, and an upbeat expression - that's how a Prussian emissary at the Vienna court described her. However, he also stated: "After going through childbirth numerous times and filling out, she has become somewhat sluggish." 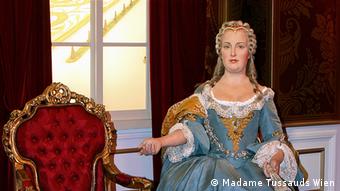 Maria Theresa is featured at Madame Tussauds in Vienna

The darlings of the empress

That, however, didn't affect the relationship between Maria Theresa and her husband, Francis I. Their marriage was to guarantee a balance of power within the spectrum of European politics. When they married in 1736, they already knew each other well, as the groom had lived at the Vienna court for a long time.

They not only appreciated each other, but felt a deep love for one another - and had 16 children together. The marriage was considered a happy one, although Francis I was said to have had numerous affairs. When the emperor died unexpectedly in 1765 after 29 years of marriage, Maria Theresa wrote: "I lost a husband, a friend, the only object of my love."

She took care of her 11 daughters and five sons, who were given a strict and comprehensive education. Only 10 of the 16 children reached adulthood, among them two future emperors, an elector of Cologne and Marie Antoinette, the future wife of King Louis XVI of France.

Maria Theresa's first major challenge came shortly after she had ascended the throne: Other European rulers started making territorial claims after she had assumed authority over the House of Hapsburg in 1740. Among them was the King of Prussia, Frederick II, who triggered the Silesian Wars and with them the War of the Austrian Succession.

When the latter ended in 1748, Maria Theresa had lost the region of Silesia forever. Furthermore, she was forced to give up the duchies of Parma and Piacenza. She did succeed, however, in keeping all other territories of the Habsburg Empire. Maria Theresa gained a great deal of respect by asserting her power in trying times. King Frederick II of Prussia remained her biggest enemy. In her view, he was a "monster" and a "miserable king." 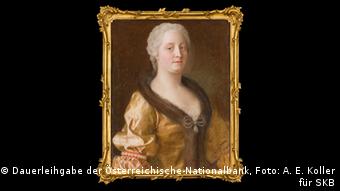 It's quite likely that Maria Theresa, who called herself Roman Empress from 1745 onwards, actually admired the Prussian king in secret. After all, she carried out long-term reforms that mirrored those made in Prussia, which were marked to some extent by the spirit of enlightened absolutism.

She doubled the size of the army, reformed the military and the judiciary, and established a high court. She also set up new structures in the educational system with the objective of introducing compulsory schooling, and standardized measurements and weights.

The capital city Vienna got a facelift and the stock exchange (Boerse) and Burgtheater were built. Streets in the city were paved, and the Schönbrunn Palace, originally a hunting lodge, was enlarged and transformed into a prestigious landmark. It became Maria Theresa's favorite palace.

In some regards, the conservative Catholic ruler applied a strict zero tolerance policy. She had no sympathy for non-Catholics. Under her rule, Protestants were even persecuted and expelled to be resettled in thinly populated regions of what is now Romania.

She also displayed no tolerance for Jews. Roughly four years after she had ascended to the throne, she expelled 20,000 Jews from Prague and other parts of Bohemia in 1744. The monarch remained intolerant until the end of her life. 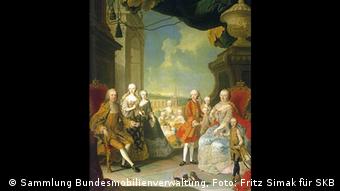 Maria Theresa, Francis I, and their children in 1754

During her entire life, the devout Catholic showed no tolerance at all towards immorality. She went so far as to introduce a chastity court that charged prostitutes, adulterers, homosexuals, sodomites and even sexual intercourse between members of different religions. Depending on the crime, the sentence could include whipping, deportation or even the death penalty.

Someone who was never charged by the chastity court was her own adulterous husband. From 1765 onwards, the handling of what was seen as immorality became less strict. After the death of her husband, her son Joseph II became the Holy Roman Emperor and a co-regent of the House of Habsburg. The relationship between mother and son was difficult and full of conflicts: Joseph followed the humanistic principles of Enlightenment, whereas his mother partially rejected some of these concepts as anti-Catholic.

Maria Theresa died of pneumonia on November 29, 1780, at the age of 63 in her hometown, Vienna. The most enigmatic regent of the House of Habsburg has remained unforgotten until today.

Starting on March 15, Austria is celebrating her 300th anniversary of her birth on May 13, 1717, with an exhibition taking place in four different locations. The show "300 Years Maria Theresa: Strategist - Mother - Reformer" looks at all aspects of the ruler's life, including her family life and political achievements, as well as the aftermath of her rule. The exhibition will end on November 29, 2017, the anniversary of her death.

He was emperor of the Habsburg Monarchy for 68 years; his reign permanently influenced European history. An exhibition in Austria marks the centenary of Franz Joseph's death on November 21 - and goes beyond the myths. (21.11.2016)

Myth and tradition of the Vienna Philharmonic

This year, one of the world's most renowned orchestras, the Vienna Philharmonic, celebrates its 175th birthday. The anniversary year will feature more than just a commemorative silver coin. (23.02.2017)

The art of being a tourist guide in Vienna

International Tourist Guide Day is set on February 21, allowing tourist guides around the world to celebrate their work. Here's a look at a typical day of a tourist guide in Vienna. (21.02.2017)