What is the Hera, DART planetary defense mission? | Science | In-depth reporting on science and technology | DW | 16.09.2020

Europe's space agency, ESA, and America's NASA are collaborating to protect Earth from an asteroid collision. The target: A double asteroid called Didymos. 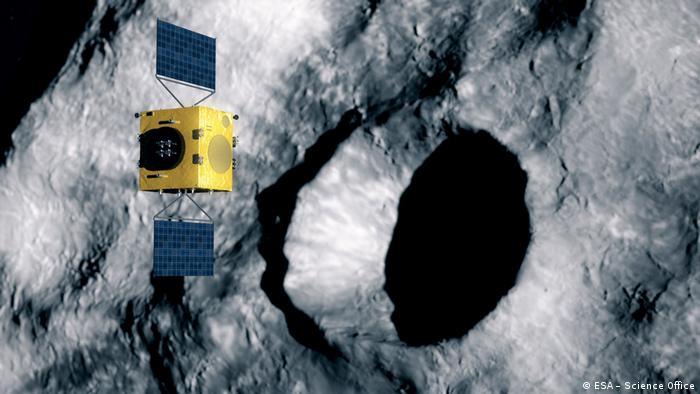 It's not unusual for asteroids to flyby our planet or even enter our atmosphere in some form or another. But some are more threatening to life on Earth than others, and that's why the Europeans and Americans are leading an international effort to test our planetary defense capabilities with their joint DART and Hera missions.

Tons of interplanetary dust and debris rain down on Earth every day. Some of it is the size of sand grains, pebbles or rocks. That can produce meteors or "shooting stars."

Larger objects, about the size of a car, often enter the Earth's atmosphere and create fireballs or so-called bolides. They tend to explode and disintegrate before they hit the ground.

In August 2020, one such near-Earth object called 2020 QG entered the record books for being the closest known nonimpacting asteroid. It flew above the southern Indian Ocean at a distance of 2,950 kilometers (1,830 miles) from Earth. For comparison, the International Space Station looms over our planet at an average distance of 400 km. 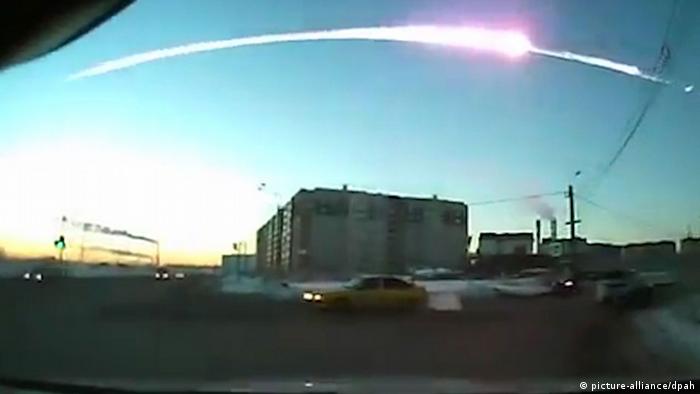 "Very rarely, every few decades or so," says NASA, even larger objects enter the atmosphere, such as a "house-sized object that streaked across the sky over Chelyabinsk, Russia, in 2013, producing a super-bright fireball and a shock wave that blasted out windows and broke down doors."

And then there's the sort of asteroid that wiped out the dinosaurs 65 million years ago. If the dinosaurs had had our knowledge and experience in science, they may have been able to save themselves, suggests Brian May, an astrophysicist who is perhaps more famous for being the guitarist in the rock band, Queen.

But he knows his stuff. As do NASA and ESA. They will use their two spacecraft, DART and Hera in a first step to assess Earth's ability to deflect or, as May puts it, "deflate" life-threatening and hazardous asteroids.

What's the target and why?

In its initial stages, this collaboration between scientists in America and Europe, the Asteroid Impact & Deflection Assessment (AIDA) project, will target a so-called double or binary asteroid system. That is two asteroids moving closely together, in unison.

They are what ESA describes as "a little understood class" that make up about 15% of all known asteroids.

For this first test, the team aims to hit and study a near-Earth asteroid system called the Didymos pair — or officially, asteroid 65803 Didymos (1996 GT).

They are what's known as an Apollo or S-type rocky near-Earth object (NEO).

One is larger than the other. The main body is about 780 meters (2559 feet) in diameter, that's roughly mountain-sized. And that is orbited by a moon called Dimorphos, which is about the size as the Great Pyramid of Giza, or 160 meters in diameter. 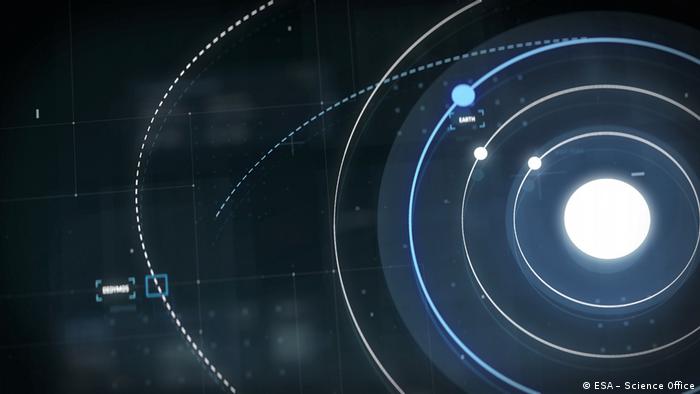 The Didymos asteroid pair poses no threat to Earth, say the scientists. The nearest it will get to Earth — during a "close encounter" in 2022, will be about 10 million km from our planet. But ESA says that also makes it "the ideal candidate for such orbital deflection experiments."

What will DART do?

The first spacecraft, DART, is due to launch in July 2021. Its name stands for Double Asteroid Redirect Test.

DART should arrive at the double asteroid by September or October 2022. It will perform what's called a "kinetic impact" on the smaller of the two bodies, Didymoon. Basically, it will crash or slam into the asteroid moon, with a speed of 6.6 km per second, and the aim of leaving a 20 m crater.

It sounds easier than it's likely to be in reality.

But it's hoped that that impact will alter Didymoon's orbital velocity of 17 centimeters per second by half a millimeter per second. Scientists say that tiny nudge will be enough to change the smaller asteroid's rotation around the larger one by about 200 seconds, and that's just enough to make it possible for them to measure the change with Earth-based telescopes. 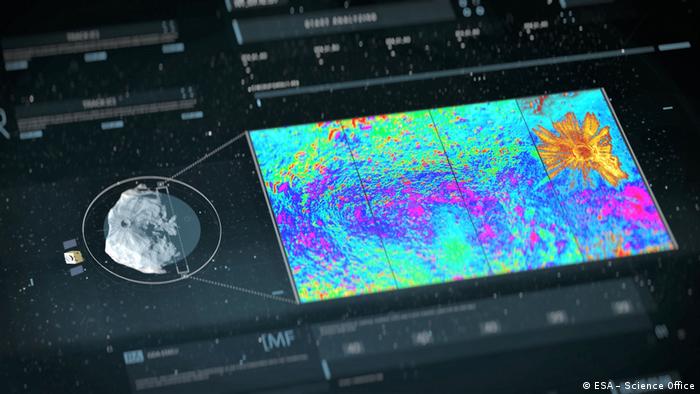 Scientists says this is an important test to assess whether it would be possible to alter the orbit of a hazardous asteroid around the sun — to deflect it and stop it hitting Earth — and how much would be enough, but not too much.

The crater may also provide information on the asteroid's composition — what it's made of on the surface and below the surface.

Knowing that will help scientists understand what it would take to deflect an asteroid of the Dimorphos' kind. Because, even as the smaller of the two, Didymoon has "city-killing" potential — if it ever got close enough, it could do considerable damage to a city on Earth.

What will Hera do?

Hera is due to launch in October 2024. It should arrive at the double system in late 2026 and survey the moonlet, close-up, for at least six months. About the size of a desk, Hera will carry two smaller satellites, known as CubeSats.

It will deploy those CubeSats to conduct, among other things, the first ever radar probe of an asteroid's interior. Hera will scan the shape of DART's crater for information that may help design asteroid deflection missions in the future. It will also demonstrate inter-satellite link technology in deep space and provide experience of ultra-low gravity operations.

One of the main objectives of the joint mission is to estimate Didymoon's mass. Hera should do that with "an uncertainty of less than 10%" — or an accuracy of 90% — and that is "only possible by flying to it," says ESA. 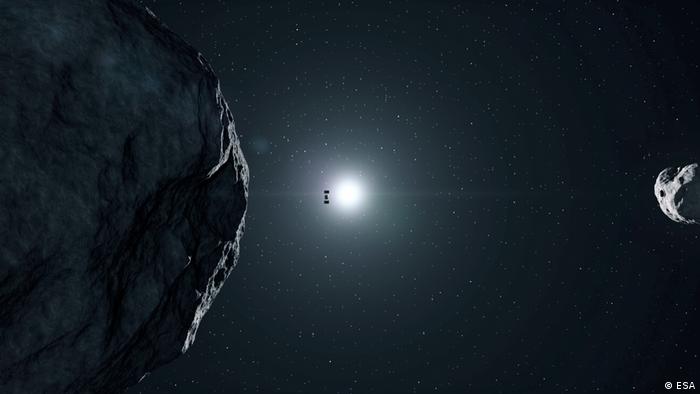 You would normally attempt to measure an object's mass by tracking its gravitational effect on a spacecraft's trajectory. But the scientists say that's impossible here due to Didymain's close, gravitational field. So, instead, they will attempt to estimate Didymoon's mass by measuring the "wobble" it causes for Didymain.

Hera will map the surfaces of the asteroids, with a resolution of a few meters. And around the crater left by DART, it should provide images with a better than 10 cm resolution, over the course of a series of flybys.

The spacecraft is being built in Germany by prime contractor OHB System AG, but Hera and its CubeSats isa joint venture involving a range of engineers from Italy, Belgium, Portugal, Romania, Spain and the Czech Republic, and at least 10 other ESA member states.

NASA says we would need about a decade to plan and perform an asteroid deflection mission. That should be enough time to shift its orbit by a fraction "to make it cross Earth's orbit only about 10 minutes 'late' to avoid a collision" with our planet.