What is the Bundesliga?

The Bundesliga is the name most people associate with the top league in German soccer but it is in fact the title given to a far-reaching net of organizations which support and promote the game all over Germany. 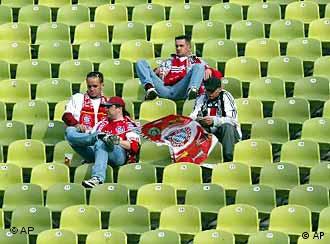 German fans love to get there early, be it professional or amateur level

The German Federal Soccer League or Bundesliga is the generic term for an intricate framework of associations, clubs and members which is spread all over the country and which incorporates many levels of the game, both playing and organizational.

The top professional league is the 1. Bundesliga. It is made up of 18 teams which compete season by season for the title of German champion. Each team plays each other twice in the league, home and away. Since the 1995/96 season, the three-point rule has replaced the previous two-point reward for a victory. The winner of each match now gets three points, the loser of the match gets none and in the case of a tie, each team gets one point.

Of course, only one club, that with the most points at the end of the season, will be crowned Deutscher Meister, but it is the bottom three which are relegated directly and are replaced by the three best teams from the 2. Bundesliga. 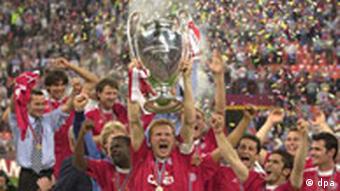 Bayern Munich was the last German team to win the Champions League in 2001.

However, other top teams in the 1. Bundesliga also get rewards. The German champion, the runner-up and third placed team qualify for the Champions League, the premier European club competition. The fourth and fifth place teams, plus the winner of the DFB Cup, go into the pot for the UEFA Cup. If the DFB Cup winner also holds a Champions League place then the cup runners-up will go into the UEFA Cup.

Those teams which are relegated from the top flight German league at the end of the season drop into the second division for the next. The 2. Bundesliga is also made up of 18 teams which battle for the three promotion places up for grabs at the end of a campaign. Those who finish at the bottom face the next season back in their regional leagues, playing for the chance to get back into 2. Bundesliga action.

The infrastructure that supports the first two leagues is a complex web of regional and state associations which support thousands of clubs and literally millions of players. The organization that regulates this intricate system is the German Football Association (DFB).

The DFB divides the country into sectors all with their own governing body. There are five regional federations: the North, the North East, the South, the South West and the West. As a whole, these regional areas contain 21 state federations, approximately 26,239 registered clubs and over 6.2 million members.

Not just a man's game 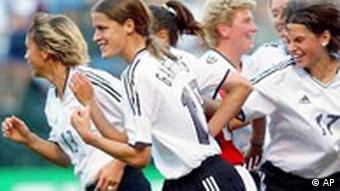 The German women are world beaters.

Since 1997, the DFB has also run a professional Women's Bundesliga. The league features 12 teams and operates in much the same way as the men's professional league. Matches are played home and away and the bottom two teams at the end of the campaign are relegated.

Before the Women's Bundesliga season begins, a competition between the best eight clubs in the regional leagues is fought to see who will take the places vacated by the relegated teams from the season before. Two groups of four teams compete over two legs and the winners of both groups win promotion to the Bundesliga.

Training the Champions of the Future

By implementing the latest technology and scientific methodology, the German Football Association hopes to build a team of highly trained youngsters capable of competing for international honors in the future. (June 17, 2004)

A crucial meeting to heal the rifts in the German Football Association on Monday diverted a potential rebellion but failed to fully resolve the major problems threatening the future of German soccer. (July 6, 2004)

Germany Advances in the Other World Cup

The soccer World Cup in Germany 2006 is still a long way off. But to the surprise of some, there is another one happening right now. And Germany is doing rather well in it. (October 2, 2003)