What is Iran's Nuclear Program Really For? 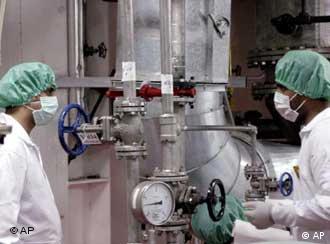 Iran insists its nuclear program is only for civilian purposes

DW-WORLD: Does Iran have the ability to build a nuclear bomb? 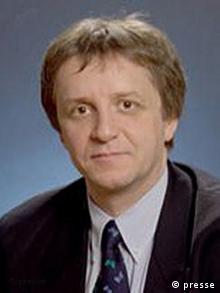 Oliver Thränert, head of the Security Policy Research Unit at the German Institute for International and Security Affairs (SWP) in Berlin

Oliver Thränert: Iran is creating the prerequisites by building a uranium enrichment facility in Natans. Enriching uranium is one avenue to building a nuclear weapon. At the same time, they are building a heavy water reactor from which they could produce plutonium. Plutonium is the second avenue to build such a bomb. Iran declares both developmental steps as a civilian undertaking, which, the Europeans and the Americans for different reasons have doubts about.

What are the Europeans doing to dissuade the Iranians from their nuclear program?

The Europeans and the Americans don't want to cut off the Iranians entirely from using nuclear technologies. Rather, they want to allow them to continue to use light water reactors, for example. The Europeans would even be prepared to sell a light water reactor (a nuclear power plant), if Iran would agree to do without heavy water technology, which in view of its military uses, is very dangerous.

What is the European Union's aim in its talks with Iran?

In any case the issue is to convince Iran to stop anything that could lead to a complete nuclear fuel cycle, that is, to independent uranium enrichment. It is a very dangerous technology which at the moment only 10 countries possess -- and most of them also have nuclear weapons. If you have the technology in the first place, you can use such facilities to enrich uranium by 5 percent and thus build fuel rods for reactors -- or you enrich it up to 90 percent and use it to produce nuclear weapons. One and the same facility can -- without much constructional alteration -- be used for civilian and military purposes.

If Iran is not satisfied with light water reactors, is it fair to assume that they are pursuing aims other than civilian ones?

The Iranians argue that they want to be independent. If you operate reactors but can't produce your own fuel rods you're dependent on others. And they say they often can't rely on their trade and cooperation partners. Also, after the Islamic revolution in 1979, the company Siemens stopped construction of a reactor. A certain amount of fear of isolation on the part of the Iranian elite plays a role here. On the other hand, the facility's size and the fact that there's no connection between it and the building schedule for reactors suggests that is really an enrichment facility for military purposes.

The various positions appear incompatible. How can a solution be found?

To start with, we'll have to wait for the Iranian presidential election in June, since the nuclear question naturally plays a role in the election campaigns too: Nobody wants to be the one to give in to Western demands. I could imagine that if Rafsanjani is elected a solution could be found. He's a centrist, a representative of the Iranian trade bourgeoisie, and interested in improved trade relations -- with Europe above all. At the same time, he has the chance to establish a broad basis to reach a compromise with the Europeans.

The head of the International Atomic Energy Agency, ElBaradei, said the US would have to provide Iran with a security guarantee for the country to give way on the nuclear issue. How do you see the role of the US?

The US has changed its position since President Bush's visit to Europe and clearly declared at the highest level that they back the Europeans in their efforts. They have gone so far as to say that Iran could be accepted in the World Trade Organization and the US would abstain from vetoing them there. I don't believe the US would express a security guarantee. I think that will be the sticking point in the end. On the one side, the Iranians would gain a lot, also economically, from a compromise. On the other side, there are these security concerns, which again have to do with America. At the moment, there's no real perspective in this matter.

Dr. Oliver Thränert is head of the Security Policy Research Unit at the German Institute for International and Security Affairs (SWP) in Berlin.

Opinion: Carrot and Stick for Iran

While the US is willing to offer economic incentives to Iran, the EU said it will take Tehran to the UN Security Council over its nuclear program if need be. The join strategy won't help much, says DW's Peter Philipp. (March 13, 2005)

Are France, Britain and Germany considering a compromise that would allow Iran to continue some of its nuclear activities while angering the US? EU diplomats say they have not ruled it out. (March 31, 2005)

US, Europe Agree on Approach with Iran

The US and Europe have agreed an approach in negotiating with Iran over its nuclear program, with Washington to offer modest economic incentives and Europe to take the issue to the UN Security Council if all else fails. (March 11, 2005)