What Germans reveal about themselves through the beer they drink | Lifestyle | DW | 07.11.2017

What Germans reveal about themselves through the beer they drink

Pilsner, Pale lager or the dark Imperial Stout? Your preference in beer can reveal a lot about you, says a recent study.

Beer consumption may be declining worldwide, but the German people's drink of choice is going nowhere, a recent study by Splendid Research suggests.

More than two-thirds of all Germans between 18 and 69 drink beer; more than half of those of drinking age grab a pint at least twice a week, according to the study. 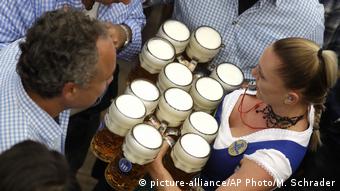 How much does beer consumption go up in Bavaria during Oktoberfest?

That might help explain why Germany is in the top 25 nations for alcohol consumption per capita, according to a report by the World Health Organization (WHO) released earlier this year. The study noted that, on average, people consume roughly 11.4 liters (6.25 pints) annually.

For anyone who's spent a lot of time in a beer garden or pub in Germany, it will come as no surprise that men are more frequent consumers of beer, according to the Splendid Research study. Thirty percent of men reported drinking at least four days a week, whereas just 12 percent of women did.

A quarter of the people surveyed in the southern states of Bavaria and Baden-Württemberg drink more than four times a week – compared to just 14 percent in the northern states.

Germans are also extremely ingenious in finding ways of opening beer bottles without an opener, as this video demonstrates:

Many ways to open a bottle of beer

Craft beer may be en vogue in the US and elsewhere, but in Germany it still hasn't made the inroads that standard brewery brands have. Just 42 percent of Germans know what a craft beer is; 44 percent say, once given the definition, that they've actually drunk one.

Do you fancy handmade craft beer from small breweries? Then you are probably a younger male with higher income, the research says. Older generations in Germany prefer their favorite local brands such as Beck's, Krombacher or Erdinger.

Step inside Berlin's craft beer week in this video:

A beer for everyone

If you order a pilsner in Germany, you go with the flow: 57 percent of those surveyed prefer this brew – Germany's number one. And if you like to mix beer with soft drinks, then you are probably a passionate cyclist, too.

If ever you're into unusual investments, some of the beers featured in this gallery – 10 of the world's strongest ones – are now collectors' items.