The British Antarctic Survey were integral in finding the first evidence of holes in our planet's ozone. Now Mike Dinn, operations manager at BAS, warns of worrying changes on the Brunt Ice Shelf. 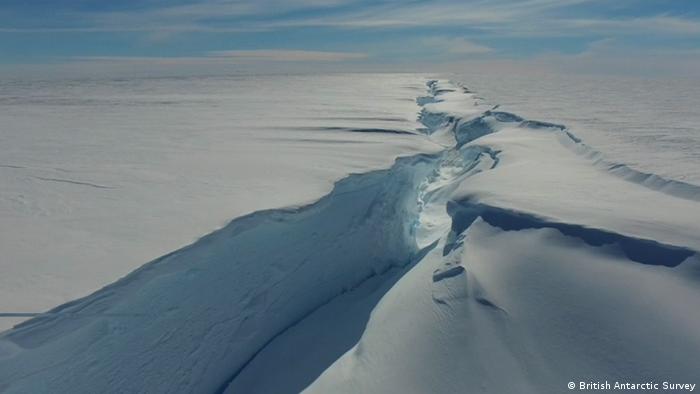 DW: What is the latest you've heard from the Halley 6 team?

Mike Dinn: The main activity that's going on at Halley this season is the move of the research station from its current location to a site that is 23 kilometres away. And this is to move it in to an area that is less threatened by the ice-calvingevents that are happening that we've seen happening over the last two years.

The British Antarctic Survey has said that there's "no immediate risk” – why move them now?

We've seen some unprecedented change in the glaciology of the ice shelf. We've seen a progressive change over the last two years – based around a cavity widening and within the last two months there's been a new crack that has opened up. The so-called "Halloween crack” that first came to our notice on October 31 last year.

So we've been taken modeling of the Brunt Ice shelf using a whole raft of different things, including GPS measurements, looking at differential movements on the strains rates within the ice shelf itself. We've been getting satellite imagery that enhances our perspective and been using radar to see how fissures are opening.

And the point is to get close to these ice fissures? There must be safer parts of the Antarctic that these researchers could be located.

Well, the actual position of being on the ice shelf itself is one of historical perspective, in that we first occupied this area of Antarctica in 1956. So the first Halley station was built on that location and we've quite successfully operated on the Ice Shelf over the interim period. We've actually had six research stations based at this site over that time and at various points in time we've seen changes on the ice shelf but none of them reflect the situation as we see it today.

You mentioned the scientific advantages of this area. What are those advantages?

Did you foresee that you'd have to move these eight modules? They look very mobile. How intentional was that and how often did you plan on moving these things?

Yeah that was absolutely intentional. We've built six different research facilities since 1956 and these modules were specifically designed to be "jackable” - they have hydraulic legs that we can raise them out of the snow with relative ease - so we can take them out of the ever-accumulating snow.

They fit on skis and therefore can be towed. So when they were built they were moved from the original build site to the location of Halley VI and the idea was that as time went on the station progresses towards the sea because it's on an ice shelf that moves and then calves at the ocean's edge. So you have to progressively move it inland to protect it from falling out to sea. So it's performing exactly as designed.

There are 88 people on the site. Are any of the researchers or scientists doing anything that you find quirky or interesting?

We have a very long-term measurement of the ozone which of course was very fundamental to our understanding of the Earth's ozone hole - the one that manifests itself annually to a greater extent in the spring in the southern hemisphere. We've been monitoring that and were indeed integral to the first understanding of that ozone hole and all the legislation and so forth that then followed in terms of trying to protect the world's atmosphere from ozone depletion.

So what about Antarctica lends itself to space research?

We're looking at space weather events. These are critical to communications infrastructure and other things. Such as satellites in space, which are subject to potential damage from solar flares. We're also looking at a prediction of those kind of events because obviously these near space objects are potentially at threat from those kind of things. So we do predicative analysis of when there is potential for these kind of events. So that's one of the projects we do through space research.

Mike Dinn has worked for the British Antarctic Survey for 29 years as a base commander on three stations and later as a field operations manager. He now heads the entire operation as primary planner for all Antarctic remote field activities.

A break in the ice has forced the British Antarctic Survey to temporarily withdraw its staff from the futuristic Haley VI research station. The whole complex is to be shifted to a spot where it won't drift away. (18.01.2017)

In Antarctica, US Secretary of State John Kerry has said that more needs to be done to combat global warming. His comments appeared to be a jab at President-elect Donald Trump, who has called climate change a hoax. (13.11.2016)

Study: Ozone layer has begun healing itself thanks to CFC ban

The hole in the ozone layer over the Antarctic has begun to shrink, signaling good news for the environment, researchers say. The study attributes the development on the phasing out of CFC pollutants. (01.07.2016)