Westerwelle winds up his career in New York | Germany | News and in-depth reporting from Berlin and beyond | DW | 29.09.2013

Westerwelle winds up his career in New York

German Foreign Minister Guido Westerwelle bid farewell to the international stage with a final address before the UN General Assembly. Following last Sunday's German election, he will no longer be in the government. 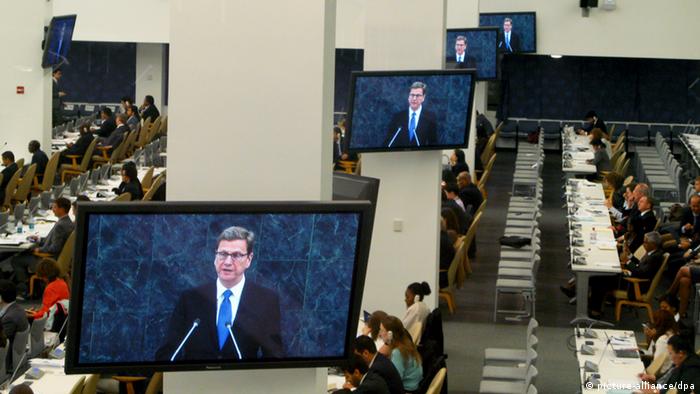 The German foreign minister walked briskly to the lectern and spoke in his mother tongue explaining the positions of his government on Syria, Iran, the Middle East conflict and - a surprise - Internet privacy. The latter, in reaction to US surveillance activities in Europe, which caused a great deal of concern and consternation.

It is as always: Westerwelle hardly shows any emotion. He is completely focused. A perfect performance. Nothing indicates that it will probably be his last speech at the UN General Assembly. But many at the United Nations already know: After the disastrous results of his party in the German general election (22.09.2013) he will not be in the next federal government.

A native of Bonn, Westerwelle has shown here in New York that he is a Rhinelander with Prussian virtues of strong self-discipline. He has just completed five days of a demanding program. "It goes without saying that I will complete my work here," said Westerwelle, to German journalists outside the UN, who asked why he was back in New York. 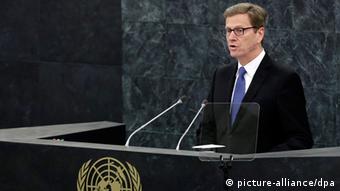 Westerwelle is known as a stoic diplomat

"Until a successor takes office, everyone should be able to rely on the fact that Germany, both domestically and internationally, is fully capable of action." The embarrassment-prone Westerwelle makes a great effort to appear calm. But he can not prevent these words bringing a slight blush to his face.

Westerwelle finds the suggestion that he is a foreign minister in New York waiting for a call, offensive. "Of course I 'm not happy about the outcome of the election in Germany in terms of my party's losses. But, this is not an issue here in New York; here we all work together professionally. Somewhere there is always a change of government." And then, with a bit more emotion, "Of course, it is true that many colleagues have strong personal relationships, which don´t end when the job ends."

None of his long-planned events has been canceled, one hears from somewhat stressed looking diplomats accompanying the minister. Will Westerwelle still be noticed outside the UN? In a New York newspaper, the president of the World Jewish Congress, Ronald S. Lauder, was full of praise for Westerwelle and said he was "one of the most charismatic politicians I have ever met.” 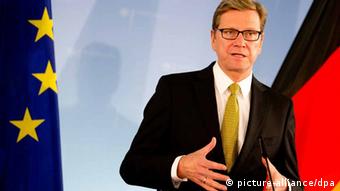 The contrast could hardly have been starker than four years ago when Westerwelle was a 'nobody' in the US, and negative perceptions preceded him. "I am aware that the expectations within and outside of Germany at that time were quite low," admits Fiona Hill, director of the Center for the United States and Europe at the Brookings Institution in Washington. "But he has really grown and acquired a reputation for himself."

Hill told DW of one of her meetings with the then freshly appointed minister in the midst of the euro and financial crisis: "He gave an impressive performance in English and held the audience here in Washington in thrall with his account of the role of Germany in Europe. “

Westerwelle is a political professional in New York amongst his peers. He is very disciplined about ensuring he is in contact with all the key people: From the UN Secretary General and the Foreign Ministers of the five veto powers in the UN Security Council, to the new Iranian president Rouhani. And it is clear that the breakthrough to hold talks with Iran on its nuclear program is a personal success for Westerwelle.

Germany may have been on the sidelines in the drafting of the unanimously adopted resolution on Syria at the UN Security Council. But the fact that there will now be serious talks in Geneva on Iran's nuclear program is, to a considerable extent, due to Westerwelle´s good line of communication with the new Iranian leadership. 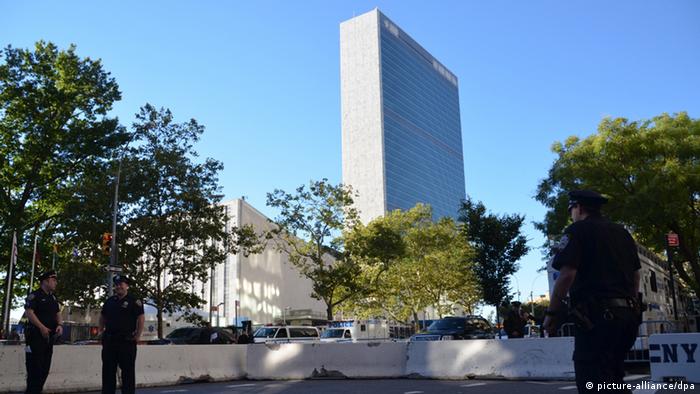 In future, UN headquarters in New York will not be Minister Westerwelle's speaking venue

In his speech to the General Assembly Westerwelle again called for a reform of the UN and a permanent seat on the Security Council for Germany. Like previous German governments, he failed in this endeavor. Westerwelle also made no headway with his initiative for nuclear disarmament and the highly controversial voting behavior of Germany to establish a no-fly zone in Libya has not been forgotten.

Fiona Hill called it a "hard blow" from which Westerwelle and Merkel had now recovered. However, Hill believes that with regard to international crises generally there is "frustration in the U.S. about the style of German politics."

While the Americans wanted to move as soon as possible to concrete actions, the Germans seem hesitant and need a lot of time for complex coordination processes.

However, whoever blames the foreign minister alone ignores the realities of German politics. It has long been known that the key foreign policy projects are managed by the Chancellery - be it European policy or relations with major powers, such as Russia, China or the United States. Washingtonhas taken note of the fact that Westerwelle has not been able to stop the decline in importance of the foreign ministry.

On the sidelines of the UN General Assembly, Westerwelle hasn´t made any remarks about what he´ll do when he leaves office. It´s hard to imagine that the 51 -year-old, who has spent an entire career as a professional politician, will now only collect art or fees for speaking engagements.

"I would like to continue to see Guido Westerwelle in a public role," said Fiona Hill. "With his own history and biography there is much he can do on the European and international stage."