Westerwelle takes the reins for a day

With Angela Merkel on holiday, German foreign minister and vice-chancellor Guido Westerwelle chaired his first ever cabinet meeting on Wednesday. Reporters were keen to hear what he thought of the hot seat. 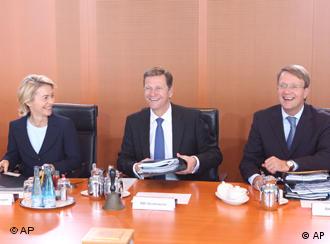 And Westerwelle's personal ratings are hardly any better. He is regularly perceived as oversensitive and uncertain, and he's been accused of naivety in his handling of internal coalition crises. 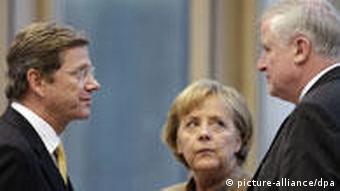 Of course, allowances must be made for a man who has spent barely ten months in office, but there was considerable interest in how Westerwelle would handle his first cabinet meeting, standing in for the Chancellor, who's on holiday.

In charge at last

At the press conference, questions about foreign and domestic policy were punctuated with requests for a more personal appraisal of the morning's meeting. His answer only came after some cajoling. "Of course, if you're given government responsibility after you've been in opposition for many years, you really look forward to the task ahead," he admitted. "But when you're actually there, you feel a real measure of the responsibility, day and night, which few people can imagine. I have in the past made fun of how tired my predecessors looked - these days I can occasionally understand it." 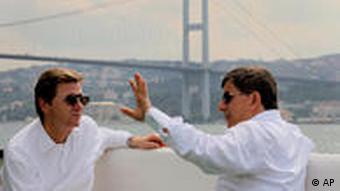 Westerwelle has been praised for reaching out to Turkey, among others

Westerwelle was of course repeatedly asked to confront his party's horrendous opinion poll ratings, and he had a well-honed reply. "No-one is happy when the opinion polls are in a dip," he said. "But I've been in politics for a long time, and I've stood on high mountains when it comes to the polls, and I've successfully crossed very deep valleys. And there is only one solution: Do your work, solve problems, and follow proper policies that are sustainable in the long term."

Popular abroad, not at home

In fairness, the criticism that Westerwelle faces at home is not shared abroad. Other countries have valued his visits, and in the European Union he has been lauded for creating partnerships with smaller nations. Similarly, he has been praised for reaching out to Russia and Turkey.

But at home, his slightly irritable attitude to the media occasionally gets him into trouble, and this was in evidence again on Wednesday. One journalist asked him what he had learned from his time in government. His reply was, "Mainly that when you're in a press conference, you don't spread too much self-doubt."

This is one danger that is clearly much on his mind, though it is not one to which he is likely to succumb.

The idea of Turkey joining the EU continues to be an uncomfortable one for many in the bloc. British Prime Minister David Cameron has thrown his support behind Turkey's bid, setting the UK apart from France and Germany. (28.07.2010)

Germany's foreign minister has praised Turkey's role as mediator with Iran over its nuclear program. Guido Westerwelle arrived in the country after being quoted as saying that it wasn't ready for EU membership. (28.07.2010)