Washington and its European allies discussed the state of the Ukraine conflict in a video conference. They agreed that a firm reaction is necessary if there's any major break in the truce. 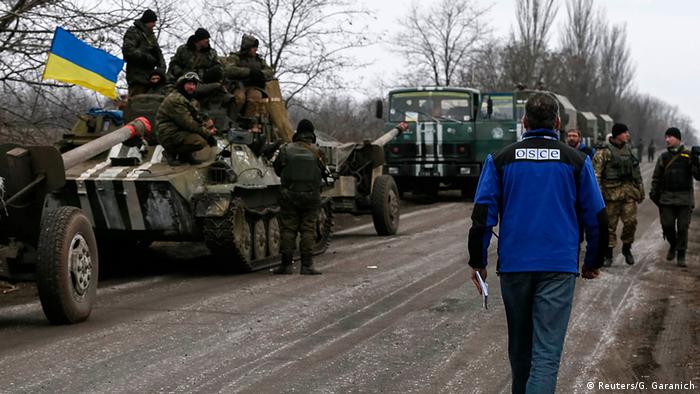 Western leaders on Tuesday agreed that a "strong reaction from the international community would be necessary in the case of a major violation in the implementation" of a ceasefire signed between Ukrainian government troops and pro-Russian separatists in Minsk on February 12.

They all underscored their backing for the Minsk agreement and the link between current sanctions and the implementation of the truce, according to a statement released by the office of the French president.

The conference came amid continuing, if sporadic, violations of the Minsk deal. On Tuesday, Kyiv announced its highest casualty toll in several days, with three Ukrainian soldiers dead and nine wounded.

Europe and Washington have accused Russia of fuelling the conflict by sending troops and weapons across the border to support the separatists, something Moscow has consistently denied.

European leaders, along with Russian President Vladimir Putin, agreed on Monday that the Organization for Security and Cooperation in Europe (OSCE), needed a broader role observing the ceasefire.

Later this week, the Ukrainian parliament is expected to back President Petro Poroshenko's request for an international peacekeeping force to monitor the conflict. This idea, however, has faced an icy reception in Europe.

Truth and propaganda: Political reporting in the Russia-Ukraine conflict