Business experts from Africa and the rest of the world meet in Cape Town to debate past progress and future prospects for the continent's economies. The forum precedes a conference next month in Addis Ababa. 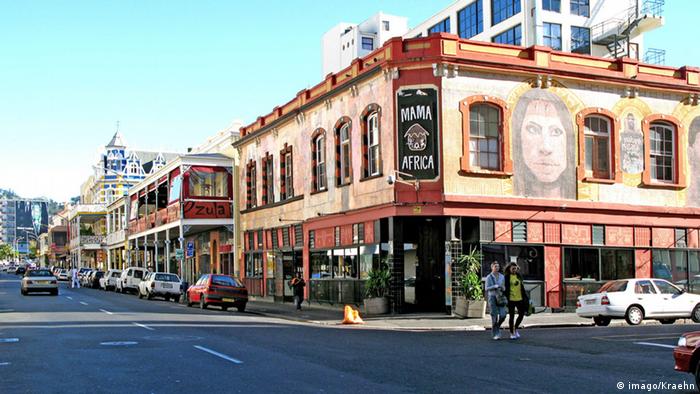 Business and finance experts from Africa and the rest of the world meeting for the World Economic Forum (WEF) on Africa will be taking stock of progress made over the last 25 years, as well as "sharing insights on the present landscape" and "identifying innovative approaches" to bring about sustainable development in the future. Among the civil society participants are several who would also like to see discussion of the ongoing inequality between rich and poor in the continent of 54 countries included on the agenda .

Poverty is not an African phenomenon. Nor is the unequal distribution of wealth. A UN report published in July 2014 found that more than 2.2 billion people worldwide were "either near or living in poverty." According to the report, "the 85 richest people in the world have the same wealth as the 3.5 billion poorest." 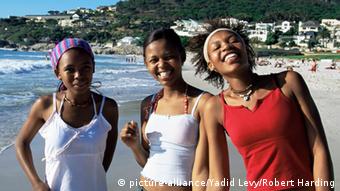 Africa has huge potential with its young citizens

An in-depth examination of Africa's economic performance and prospects, the African Economic Outlook, compiled by the African Development Bank (AfDB), the Organization for Economic Cooperation and Development (OECD) and the UN Development Program (UNDP), predicts for 2015 that "Africa will soon be closing in on the impressive growth levels seen before the 2008/09 global economic crisis." But this does not automatically mean that the benefits will filter down to all levels of society.

The Overseas Development Institute (ODI) says that increased growth is only part of the answer when seeking to reduce poverty. Inequality and income differences also need to be adressed.

Winnie Byanyima, Oxfam International Executive Director, who is attending the WEF, points out that "Africa's working-age population is expected to double to one billion in the next 25 years." In an interview with DW, she said this is "really a warning bell for African leaders." There is huge potential "but it could also be a demographic bomb - if Africa does not invest in these young people, in their skills and in jobs for them."

Byanyima is hoping to use the networking opportunities at the Cape Town forum to get her message across that African leaders must adopt a firm position on global corporate tax rules as one way of redressing the balance between "the money lost in unpaid taxes [which is] much more than the total aid coming in to developing countries." Byanyima said Oxfam has calculated that in 2010 alone Africa lost 11 billion dollars as a result of tax evasion and she cited companies which register in tax havens and then extract and export large quantities of Africa's natural resources "without paying their fair share of taxes." 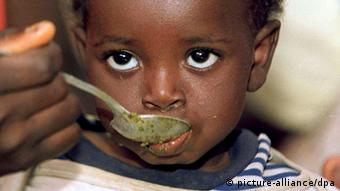 Hunger is still part of everyday life for many African children

Byanyima says there is an urgent need for a global tax body that would close existing loopholes. "Our message to the African [and other participants] in Cape Town is: please line up behind a UN reform of the global tax system. Only then can Africa finance all its ambitious sustainable development goals." This is a reference to the third International Conference on Financing for Development (FfD), to be held in Addis Ababa in July 2015. It will provide an opportunity to take stock of progress made since the first Monterrey FfD conference in 2002. The international community is currently designing a new development finance framework to fund the Sustainable Development Goals, which will replace the Millenium Development Goals.

Another factor affecting Africa's economic growth is the number of conflicts being fought across the continent. The Stockholm International Peace Research Institute (SIPRI) records that military spending in Africa increased in 2014, while the African Economic Outlook 2015 notes that "between 2001 and 2014 violent conflict has receded overall and political stability improved – although several economies suffered again, at least temporarily, from political unrest." One major cause of political unrest has been the tendency of some African leaders to attempt to stay in office beyond the length of time stipulated in their countries' constitutions. In October 2014, President Blaise Campaore of Burkina Faso agreed to step down after an unsuccessful attempt to extend his rule. Most recently, Burundi has been experiencing violent protests as President Pierre Nkurunziza insists he is entitled to run again.

While corruption and mismanagement are to be found worldwide, there are several blatant examples in Africa which go some way towards answering the question why there is such an unequal distribution of wealth. "Corruption has been a key aspect of political and economic structures across a range of West African countries," writes Transparency International in its latest report. 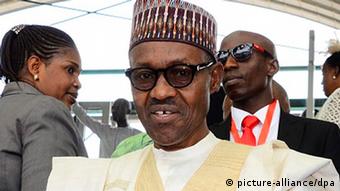 Thanks to its oil production, the Nigerian economy is now the continent's largest but more than 40 percent of the population live in poverty. The country ranks 136 out of 176 countries, with a score of just 27 out of 100 on Transparency's 2014 Corruption Perception Index. The organization recommends that one of the first things new president Muhammadu Buhari should do is publish "a believable audit" of the country's oil revenues. "Stability also depends on how the fruits of growth are shared. In this respect many African countries rank poorly," says the African Economic Outlook.

Last but not least, the devastating Ebola epidemic battered the economies of Guinea, Liberia and Sierra Leone, killing more than 11,000 people since it broke out over a year ago, and causing economic experts to drastically revise their predictions for West Africa.

While the Cape Town forum is a useful opportunity to take stock and discuss the way forward for Africa's economies, it will not produce any decisions or resolutions. For Winnie Byanyima and others whose work brings them into direct contact with African societies' 'have nots, it's time to take steps to at least reduce the gap between rich and poor.

In Nigeria’s capital Abuja, the World Economic Forum on Africa was overshadowed by discussions about the region's security. The message that Africa holds great promise for the future took a back seat. (09.05.2014)