We just can't get her out of our heads: Kylie Minogue at 50

Australia's most famous pop export turns 50 — just after releasing her 14th studio album, Golden. The celebration of both her life and her work is a thumb in the eye of the fates, who've dealt her a tough hand of late.

Filming the Australian soap opera The Henderson Kids was the time of her life. At least that's what Kylie Minogue told German press agency DPA. It's not hard to believe, seeing as the television show was her first, in 1985. With the fame, she however lost the last bit of privacy she had left.

She went on to act in another soap opera, this time alongside future love Jason Donovan. Together with Donovan, she made up a pop duet that quickly became one of the biggest hit machines of the 1980s.

After Minogue's relationship with Donovan went down the tubes, she tried to change herself musically.

Her new boyfriend, Michael Hutchence of the Australian rock band INXS, inspired her to do so. But along with a big love like that came a lot of pain, she told gossip magazine Gala. Two years into their dream couple status, Hutchence left her for Danish supermodel Helena Christensen, ending the affair via telephone.

While they remained friends until Hutchence's death in 1997, Minogue changed her style: appearing harder, both artistically and in her dress. She acted alongside action hero Jean-Claude Van Damme in the blockbuster film Street Fighters.

The shift increased her sex appeal while decreasing her record sales; her music was no longer teeny-bopper fantasy, as she wanted to be respected for her musical talents. Critics were amused, saying that her skirt length waned as much as her chart success.

In the 90s, Minogue's efforts to remake herself musically and be taken seriously were successful. She collaborated with fellow Australian Nick Cave on the ballad "Where the Wild Roses Grow." A song about a man who murders his lover was considered one of the top 100 hits of the 90s by numerous critics.

She hit the global charts again in 2001 with the dance floor hit, "Can't Get You Out of My Head," a song for which she earned a reputation as a sex vamp.

An icon of the gay movement and country girl

As time went on, Kylie gained a spot in the hearts of many in the gay movement. She once said that she'd only marry once Australia allowed same sex marriage. In the meantime, that's happened but Kylie's not yet tied the knot.

In spring 2005, Minogue received a breast cancer diagnosis for an aggressive tumor. She withdrew from the public eye during that time, while her then-boyfriend French actor Olivier Martinez stayed at her side. Shortly after her treatment ended, she appeared once again in public, this time with short hair. Her relationship ended soon afterward. 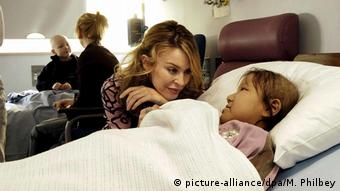 After her cancer diagnosis, Minogue retreated from the public eye; her first appearance afterward was at a children's cancer ward

Until last year, Minogue was also engaged to the youthful British actor Joshua Sasse, 20 years her junior, but that ended. She grew depressed afterward, a depression she said that was made better by a trip to Nashville, where she learned the musical stylings of American country-western. She recorded Golden, her 14th studio album which was released just ahead of her 50th birthday.

Kylie's throwing a big party to celebrate her 50th — a birthday very much worth celebrating. As she sings in the title song to her latest album, "We're not young. We're not old. But golden."

10 things you didn't know about Nena

Nena is one of the most successful German singers of all time. But what else is on her resumé? As she launches her tour of Germany, here are 10 things you probably didn't know about the pop icon behind "99 Luftballons." (07.05.2018)

Marianne Faithfull was one of only few female pop icons to emerge in the 1960s. For years she battled with drug abuse but later celebrated a massive comeback not only as a singer but also as an actress. (29.12.2016)

Australia, a country of European immigrants, has always tuned in to Europe's extravaganza of kitch - oops, we mean music. Now the Land Down Under is to participate in the event it's had its hand in all along: Eurovision. (14.04.2014)