'Weiberfastnacht' marks the start of carnival festivities in Germany's Rhineland. The day's unique history is also linked to the women’s rights movement. 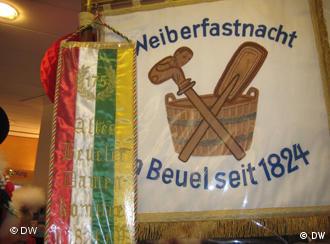 What would be a princess without an official coat of arms?

Carnival proper in Germany kicks off on "Weiberfastnacht" -- Feb. 19, 2009. This is women's carnival day, when men all around the Rhineland can expect to have their ties cut off at work as the fairer sex takes center stage in the festivities. 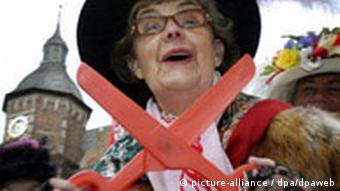 We are here, we carry scissors, get used to it!

This tradition began 185 years ago with a group of washerwomen in the small town of Beuel that lies along the banks of the Rhine River.

Fed up with working while the men were off celebrating carnival, the washerwomen decided it was their turn to throw in the towel and raise a glass or two. In 1824, they founded a Beuel women's carnival committee, which still exists till today.

"It was the first women's rights movement in the Rhineland area, and it has to be said it was a revolt against male oppression," said Evi Zwiebler, the head of this year's committee. "There were practically no women's rights in those days. It really was revolutionary, if I can say that."

From the streets and the pubs, the washerwomen brought their movement to the town hall, forcibly taking the key to the city as a symbol of their newly found power and freedom. 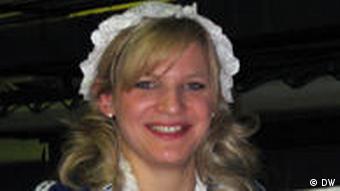 Proud of her lineage: the Washer Princess of 2009

These days, the women of Beuel need not use such force at the town hall -- in fact, the mayor is herself a woman. But the key to the city is still symbolically "taken" every year by the washer princess in a big ceremony on the afternoon of Weiberfastnacht.

The washer princess has been voted in annually by the women's committee since the 1950s. This year's crowned princess is Christine I, and it is her job to make public appearances from the start of Carnival -- Nov. 11 -- all the way through to Ash Wednesday at the end of February.

A far cry from the washerwomen of the 19th century, she wears a floor-length velvet dress, carries a scepter and even travels in a convoy of cars with her name detailed on the windshields.

The sun shines longest here in Beuel, on the east side of the Rhine. This was one of the main reasons that, centuries ago, washerwomen would lay out their cleaned laundry on the lawns here to dry. 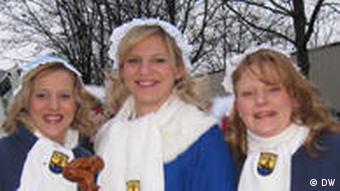 Christine I has two washerwomen-in-waiting

"My motto this year is: "Met Wiever von de Sonnesick -- es Karneval de schönste Zick!, which in English means something like "with women from the sunny side, carnival is the best time."

The tradition today is just as much about women as it is about hometown Beuel patriotism -- the part of Bonn known here as the "right side" of the Rhine River. As a cheeky nod to this, the princess' scepter is in the shape of a boy displaying his bare bottom to the citizens of Bonn on the other side of the river.

And that is not her only bit of paraphernalia: If the party should warrant participation in a meal, she even has a personalized bib ready to protect her dress from getting dirty. She may be a princess, but it would seem that there are some bits of washerwoman mentality that even time can't wash away.

In many parts of Germany, 11:11 am on Nov. 11 marks the start of Carnival, a season of controlled debauchery and uncontrolled drinking that climaxes during the days preceding Ash Wednesday. (11.11.2008)

Globalization brings us all closer and closer. Our fashion, our music even our food can be found in any country in the world. But how do people know what everything is if they don't understand the language? (11.02.2008)

One Last Gasp of Freedom for Smokers at Cologne Carnival

What's a carnival if not an opportunity to eat, drink and be merry? It's currently the "fifth season" in Cologne, and the usual rules are suspended. This year, that means revelers can flout Germany's smoking ban. (03.02.2008)