More than 24 hours after the scheduled end of the climate conference in Warsaw, delegates have finally come to a consensus. But the conference was teetering on the edge of failure right up to the final minutes. 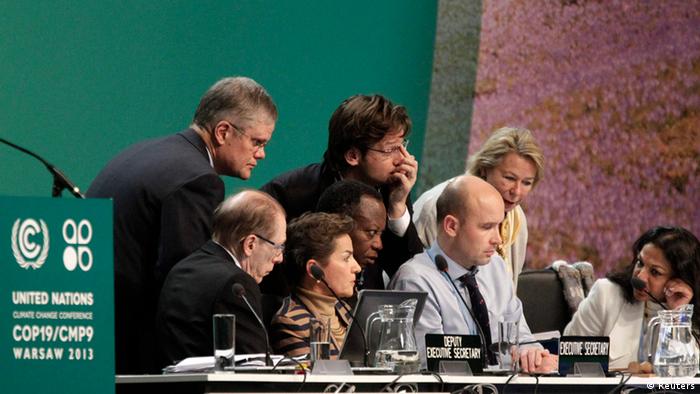 At the end, everything hung on one word. Developing countries wanted to exclude the word "under" from the climate conference's final report.

Countries like the Philippines and Bangladesh did not want to accept that the new international "loss and damage mechanism," created in Warsaw to deal with weather disasters made worse by climate change, would be established "under" an existing framework for countries to adapt to the effects of climate change.

"We must move beyond this word," said the delegate from Fiji, speaking on behalf of all the developing and emerging nations.

From the start of the talks two weeks ago, this group of countries emphasized that "loss and damage," in the language of the conference, was different from the terms summarized under "adjustment." This last term is defined by the work that developing countries must do to adapt their infrastructure, agriculture, land use and disaster preparedness plans in the face of the ever-increasing extreme weather events linked to climate change, like drought and severe storms - work for which they can count on the support of developed nations.

"Loss and damage," as interpreted by the developing countries, is defined by events to which no country can adapt - rising sea levels which flood low-lying islands, for example. 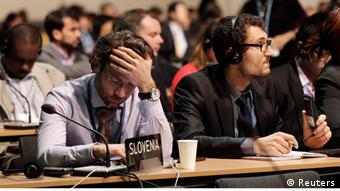 Originally scheduled to end Friday, the negotiations continued into Saturday

The controversial word lead to a long interruption of the plenary session and uncertainty as the delegates from the US, Fiji and Nicaragua met to discuss the issue further. Half an hour later, a compromise was found. The delegates agreed that "the structure, the mandate and the effectiveness" of the mechanism established in Warsaw would be reviewed in three years, including the decision to position the mechanism "under" the framework for adaptation.

Thomas Hirsch, of the German relief organization Brot für die Welt (Bread for the World) appreciated the compromise made by the EU and the US on this point, saying it was a first step. But he was disappointed in the mechanism established in Warsaw.

"This is a mechanism with a big title, but in substance it's actually just a panel of experts," he said. For that reason, he added, the mechanism would be completely useless to deal with such cases as the damage caused by Typhoon Haiyan in the Philippines, for example. "[The mechanism] simply has the task of advising and analyzing which measures could be taken, for example, to reduce the risks in the future."

The agreement in Warsaw was possible because of a compromise on the question of what the path to a global climate deal, expected to be signed in Paris in 2015, will look like. All nations - not just those in the developed world - will have to commit to reducing or limiting their greenhouse gas emissions by a specified amount.

The EU had hoped countries would quantify their emission reduction plans by 2014. At issue is the matter of having enough time to compare the proposed amounts and to see whether the commitments will be enough to keep global warming below 2 degrees Celsius.

The compromise now gives countries until 2015 to submit their commitments to climate protection. "This means that afterward, there will be time ahead of the climate change conference at the end of 2015 to review the adequacy of [these commitments]," said Karsten Sach, Germany's chief negotiator. For its part, the EU had hoped the procedure would have been "more clearly structured." 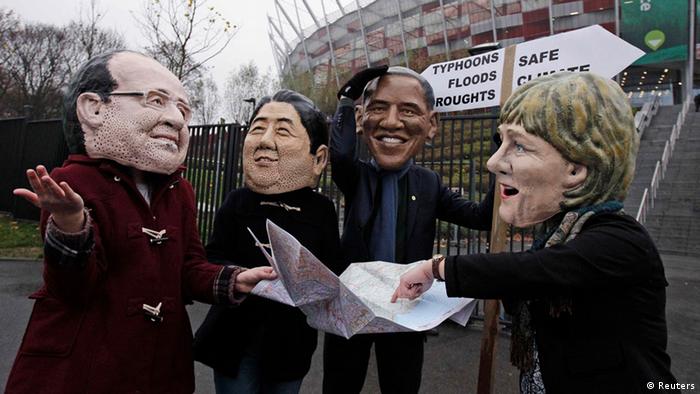 For Lutz Weischer, of the development and environmental organization Germanwatch, the Warsaw agreement left many unanswered questions. "The question, which climate commitments will apply to which countries, still remains open, as does the question of how these obligations can be made comparable," he said. "Above all, the question remains of how we will ensure that we do not break the 2-degree target."

One last middle ground had to be explored and agreed upon, that of long-term climate financing, where developed countries would give financial assistance to developing countries to adapt to climate change and possibly support low-carbon economic development. A few years ago, developed countries had promised to make some $100 billion (73.7 billion euros) available until 2020.

In Warsaw, developing countries called for a scenario in which this amount was to be achieved. But the developed nations refused to commit to a specific schedule. "The issue of climate financing was concluded in quite a disappointing way," said Liz Gallagher, senior policy adviser at environmental organization E3G. "We received no guarantees when it came to this $100 billion."

Disappointing, but not a disaster

At the end of a conference that ran 24 hours longer than planned, most participants and observers were disappointed, but at the same time relieved that a complete failure had been averted. "Is this a fantastic conclusion which solves all the world's climate problems?" asked EU Climate Commissioner Connie Hedegaard. "No, it is not. But we all knew that this wasn't the point here in Warsaw."

Germany's chief negotiator even spoke of a "positive day for international climate protection." "We've worked things out in the end," said Sach. "I think it was a very big sign that we were able to come to a compromise after this crisis in negotiations."

NGOs walked out on the Warsaw climate conference in protest at the lack of action. Understandable, says DW climate correspondent Irene Quaile. These mega-events are not going to save the world's climate. (24.11.2013)

The climate conference in Warsaw began under the shadow of last week's disaster in the Philippines. But despite passionate appeals, the conference moves into its second week without any significant progress. (17.11.2013)