Warning: this article may contain words about peanut allergies and new therapies | Science| In-depth reporting on science and technology | DW | 04.03.2016

Warning: this article may contain words about peanut allergies and new therapies

Peanut allergies are on the rise worldwide, not only in high-risk countries like the US or Australia. For some lethal, for others merely bothersome, DW looks at the gist of peanut allergies - and possible new therapies. 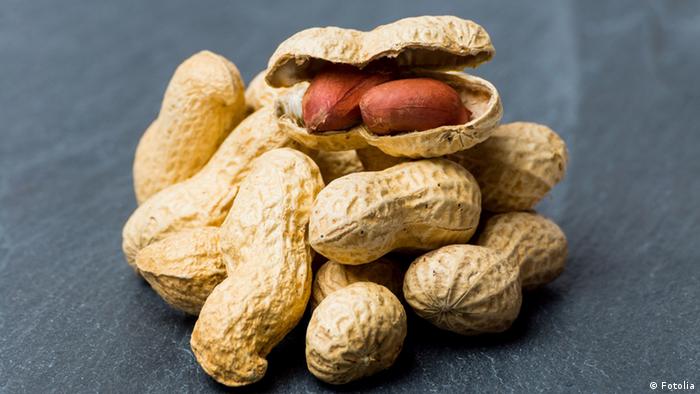 Daydreaming during a snack break this past week, I looked, probably for the first time in my life, at the back of a pack of peanuts. This is what I read:

WARNING: MAY CONTAIN TRACES OF NUTS

As I say, I was kind of daydreaming, so the absurdity of the warning took a bit of time to hit home.

Peanuts canvassed the packaging. And if the picture didn't give anything away, maybe the description "ERDNÜSSE (PEANUTS) GESALZEN (SALTED) GERÖSTET (ROASTED)" certainly did!!??

Is this just the monster of liability legalism impinging further on our day-to-day lives, the peanut version of Liebeck v. McDonald's, the 1994 lawsuit that resulted in warnings the world over that the contents of a coffee cup may indeed be hot?

"It doesn't bother me, actually," says Vanessa Webb, a Canadian living in Bonn, who suffers a severe form of peanut allergy. "Yeah, it does seem redundant... but these companies are just trying to make sure people are aware of the possible dangers."

Of all food allergies, the overreaction to peanuts can be one of the most severe.

No matter where she goes, Vanessa carries an epinephrine autoinjector with her at all times. She may need it to save her life if she accidentally comes into contact with peanuts.

"I have an anaphylactic peanut allergy. When I was three years old, I ate chocolate with peanuts in it and as a result had to be brought to the emergency room. Ever since, this hasn't happened again. But I'm very careful."

In her native Canada, Vanessa says she knew all kinds of people with a peanut allergy. In Germany, where she has lived for five years, she says she has yet to meet anybody with the affliction.

"Studies say one in 200 people in Germany [0.5 percent] has a peanut allergy," says Lars Lange, an allergy specialist at the St. Marien Hospital in Bonn. "Compared to other parts of the world, like the United States, for instance, this is very small, but it is definitely rising in Germany. We have more and more cases here."

So why is the number of cases rising? The fear of allergic reactions, especially to peanuts, permeates high-risk societies, such as in the US, Britain or Australia, where nuts are banned at many preschools.

Last month, British Airways announced it would refrain from serving peanuts onboard its planes, and that it would ask all passengers not to eat nuts during the flight if anyone reported they had a peanut allergy to the crew.

Nut dust may circulate in the air around you on a plane and that can be dangerous enough - inhaling nut allergies can spark a reaction.

In Germany, this fear is nowhere near as prevalent, even despite the apparently "redundant" allergy warnings on peanut packaging.

But it's possible the risks will rise the more we, as societies, are exposed to peanuts.

"The more peanuts we eat, the more susceptible we are to allergies - it's that simple," says Bodo Niggemann, one of Germany's leading pediatric specialists at the Berlin Charite university clinic.

Vanessa tells me she was raised in a peanut-free household. In response to widespread concern in Canada - already back then - about the danger of peanut allergies, her mom took all measures to protect her from what eventually happened by accident at daycare when Vanessa was three.

So could Vanessa's allergy have somehow been influenced by her mother's fears?

"No, absolutely not," says Niggemann. "It's a generally accepted fact that nobody can acquire an allergy based on psychogenetic factors. However, the symptoms one feels can certainly be triggered by such factors."

With that said, doctors like Niggemann and Lange are looking into new therapies to treat peanut allergies with the goal of helping patients to overcome them. A latest study, still in the process of conception, will see allergy sufferers apply peanut residue to the skin via a patch.

Similar immunization experiments in the past have shown promising results, though Lange and Niggemann say the goal of helping patients overcome their allergies is still far off.

Vanessa says there's no doubt why: "It's not anything I would ever try. I can live my daily life without much interruption, so for me, [overcoming my allergy] is not really even an option."