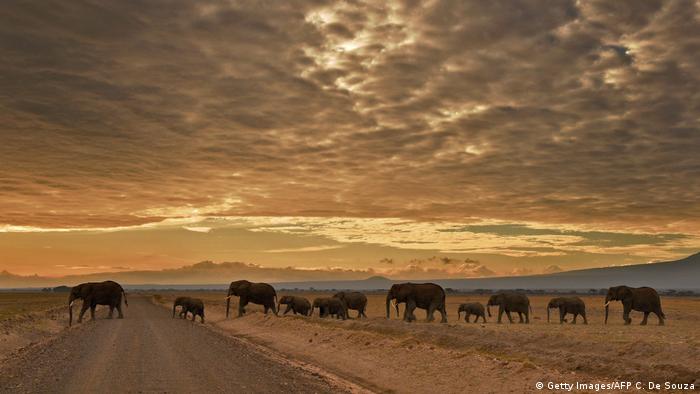 Silhouettes of African elephants against an orange sky

"They begin on a fall night, preferring the light of a full moon … Driven by the currents, they're pulled to the mouth of the river and out into the ocean," writes the WWF, rather poetically, of the European eel's long journey from the rivers of Central Europe to the far reaches of the Atlantic Ocean.

Slithering eels don't usually conjure up such lyrical language. But the creature's life journey does have something of an epic quality.

Some 8000 kilometers (4971 miles) from its start point, the European eel meets up with its American counterpart in the Sargasso Sea in the Atlantic, just east of Florida.

There they lay eggs and die. Their offspring then begin journeys that can take years back to the rivers from which their parents came.

Many don't survive the strenuous journey. Hydropower turbines finish off many, while others fall victim to overfishing, perish in polluted rivers or waste away from parasitic infections. In the last 40 years, Europe's eel population has decreased by 98%. 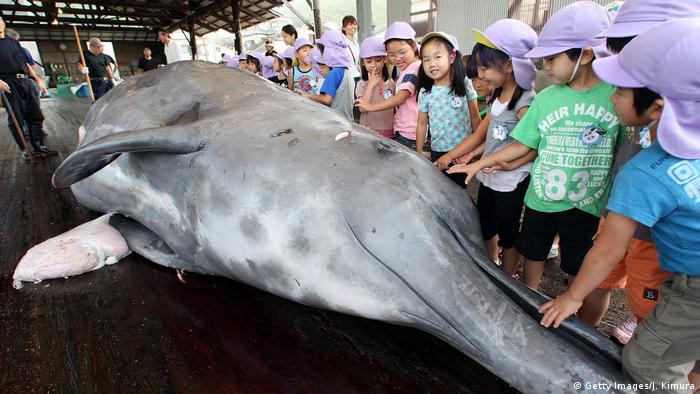 An exhibition of a dead whale. In Japan, whaling has a long tradition, but the marine mammal is endangered 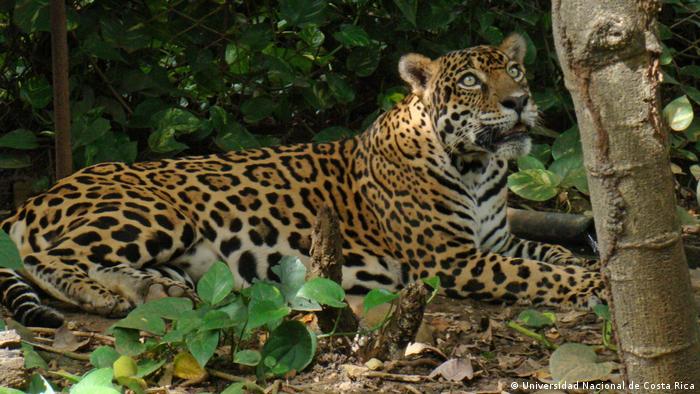 Think beyond borders to protect species

When an animal crosses so many territories, how can it be protected? That's where the Convention of Migratory Species (CMS), sometimes known as the Bonn Convention, comes in. Every three years, the European Union and an additional 129 countries signed up to the CMS meet to discuss cross-border measures to protect eels and other animals on the move.

In February 2020, the convention met in Gandhinagar, India, where 10 migratory species, including the Asian elephant, jaguar and the oceanic whitetip shark, were added to the international wildlife treaty for the first time.

Nature's travelers face specific challenges, particularly as humans encroach more on animal habitat and carve up the landscape with roads and settlements, say experts. Wildlife needs to be taken into consideration at the planning stages of such infrastructure projects.

"Improving connections between habitats is important if we want to stop or even reverse extinctions," said Arnulf Köhncke, an ecologist with conservation group WWF.  "You need to look at where an area cuts through as few migration routes and habitats as possible and plan and implement corresponding, cross-border (wildlife migration) corridors."

Several bilateral agreements to protect migratory species already exist within the framework of the Bonn Convention. For instance, Chile and Argentina have committed to saving the endangered south Andean deer, which moves up and down the South American Andes, crossing through both countries as it does.

The trade is in animals caught in the wild. Breeding eels in captivity has so far proved impossible because of their complicated life cycle, which until recently, scientists still knew little about.

It's a lucrative gig and one that is driving down eel numbers. Although, the trade is regulated, enforcement is often lacking. People should avoid eating the animals, according to WWF. And we should avoid consuming too much fish and meat in general to halt species loss, says the conservation group.

Veronika Lenarz, who works with the secretariat of the Bonn Convention, agrees. But several major countries, like the USA, Russia and China, aren't party to the convention, while Japan refuses to sign up because of its whaling industry.

"We are in a crisis that threatens global biodiversity," said Lenarz.

In a major assessment of the world's wildlife published in September 2020, the UN warned of "unprecedented biodiversity loss" and said the global community had failed to fully achieve any of the 20 biodiversity targets set by the international organization 10 years ago.

While migratory animals are also impacted, not enough is known about many of the species to gauge to what extent. Researchers estimate there could be anywhere between 5,000 to 10,000 migratory species, ranging from storks and butterflies, to dolphins and wolves.

Regions in which the climate is changing most rapidly and on a large scale present a particular danger for migratory species. The animals, following a deeply embedded evolutionary instinct, will search for seasonal habitats in search of food and shelter. However, food is increasingly scarce in these places due to climate change.

Some animals are adapting. Compared to 20 years ago, fewer migratory birds are flying to their wintering grounds. But because these nomads are dependent on the many different habitats they use as resting points on their journeys, they are more vulnerable than their settled counterparts. By staying put, they're also in increased competition for scarce winter food supplies.

And while animals can adapt, not many can keep up with the pace of climate change.

"Reports from the UN climate group IPCC show that only a few species can move with the speed of climate change. And often alternative habitats are already occupied by humans," said Köhncke from the WWF.

The climate crisis and species loss shouldn't be viewed as unrelated issues, because both are damaging to the planet, added Köhncke.

"Migratory species help to maintain life on Earth. They contribute to the structure and functions of ecosystems as pollinators and seed dispersers, deliver food to other animals and regulate the number of species," said Köhncke.

Ensuring the conditions for the survival of these species should be considered when planning measures for dealing with the consequences of climate change, he added, referring to the WWF study "Wildlife in a Warming World."

Published in 2018, the study found that around 50% of species in some of the world's key natural regions, such as the Amazon, could disappear if climate change continues unabated.

Reindeer for instance, some of which migrate in the northern hemisphere, are no longer able to find enough food. Usually in winter, the animals clear snow with their hooves to uncover the lichens and moss they feed on. But temperatures now vary wildly, causing snow to melt or fall as rain instead. When the ground cools again, ice forms and the reindeer cannot get to their grub.

Looking to the example of Mexico, the International Fund for Animal Welfare (IFAW) has shown protecting endangered migratory species doesn't have to be complicated.

Industrial farming has contributed to the jaguar's habitat shrinking by 50% in South and Central America in the last century. As a result, they began roaming near villages looking for food and attacking villagers' dogs. People retaliated by killing them. The IFAW hired community members to build dog houses, meaning the canines are no longer out roaming at night when they could run into big cat predators.

However, with the global conservation failures of the past decade looming, all eyes will be on the UN Biodiversity Conference scheduled to take place in China in 2021 and whether it can pull off a plan for protecting migratory and non-migratory animals like.