German carmaker Volkswagen has said it is setting aside billions in provisions to cover the costs of a scandal over rigged emissions data, which is likely to involve more than 10 million cars worldwide. 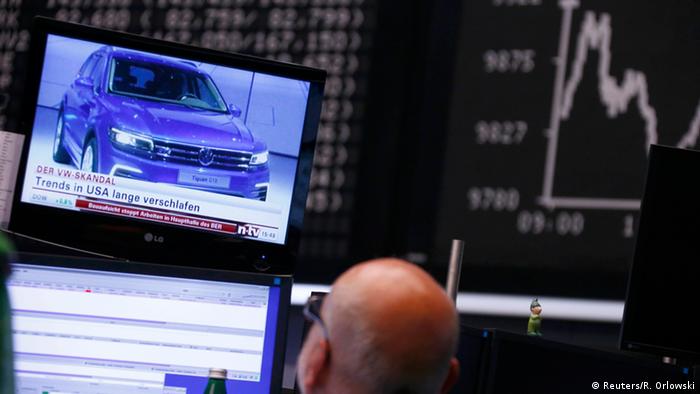 German auto giant Volkswagen admitted Tuesday that as many as 11 million diesel cars worldwide were equipped with a particular engine type that could skew emissions data.

The carmaker also announced it was setting aside 6.5 billion euros ($7.2 billion) in provisions in the third quarter to cover potential costs resulting from the scandal, adding that this would lead to an adjustment of its 2015 profit targets.

The announcement sent Volkswagen shares down a further 20 percent on the Frankfurt stock exchange Tuesday, after they had lost already more than 18 percent the day before.

The head of the carmaker's US operations apologized late Monday for the German automaker's use of software designed to help its cars cheat US emissions standards. VW Group of America chief executive Michael Horn said the company had been "dishonest" with environmental regulators and clients in the US.

"In my German words, we totally screwed up," he told an audience in New York at a launch event for the company's new Passat model.

On Friday, US authorities announced that Volkswagen had fitted its recent four-cylinder VW and Audi diesel car models in the US with software called a "defeat device" that covertly turns off pollution controls when the car is being driven and turns them on only when it detects that the car is undergoing an emissions test.

With the device off, a car could spew health-threatening pollutant gases - including nitrogen oxide in amounts up to 40 percent higher than permissible emissions standards - into the air, said the US Environmental Protection Agency (EPA).

Meanwhile, the US Justice Department is conducting a criminal probe of the emissions case. The violations could cost VW $18 billion (16 billion euros) in fines, in addition to recalls and repairs.

On Tuesday, the scandal spread to Australia and South Korea, where reports say governments are demanding their own investigations into whether the emissions-cheating software was installed in vehicles sold in their countries.

South Korea's Environment Ministry said in a statement that if it discovered similar problems, its probe could be expanded to all German diesel imports, which have surged in popularity in recent years in a market long dominated by local producers led by Hyundai Motor.

The South Korean probe would involve 4,000 to 5,000 vehicles, covering VW Jetta and Golf models and sister company Audi's A3 produced in 2014 and 2015, a deputy director at South Korea's Environment Ministry told Reuters.

Suh Sung-moon, an analyst at Korea Investment & Securities, said the scandal would hurt South Korean demand for Volkswagen and Audi cars and benefit local brands such as Hyundai and sister firm Kia Motors.

"South Korean consumers are very sensitive to news, and this emission news will have an impact on the import market," he told Reuters.

Revelations that Volkswagen rigged US emissions tests have some EU lawmakers question whether this is an isolated incident. The French Finance Minister is calling for a sweeping, "Europe-wide" probe. (22.09.2015)

Embattled VW to face criminal investigation in US and further scrutiny in S. Korea

The US Department of Justice has launched a criminal investigation into Volkswagen after the carmaker admitted to violating environmental standards. The probe comes in addition to previous fines. (22.09.2015)

Opinion: CEO Winterkorn must step down

VW has manipulated US emission control tests. Company chief Martin Winterkorn is in the center of criticism. Will he have enough time to shed light on the current scandal? DW's Thomas Neufeld says "no." (21.09.2015)