VW could scrap dividends to save money | Business| Economy and finance news from a German perspective | DW | 29.03.2016

Volkswagen shareholders may go home empty-handed this year. The automaker has reportedly ruled out the possibility of paying dividends in order to save money for the financial fallout of its emissions-cheating scandal. 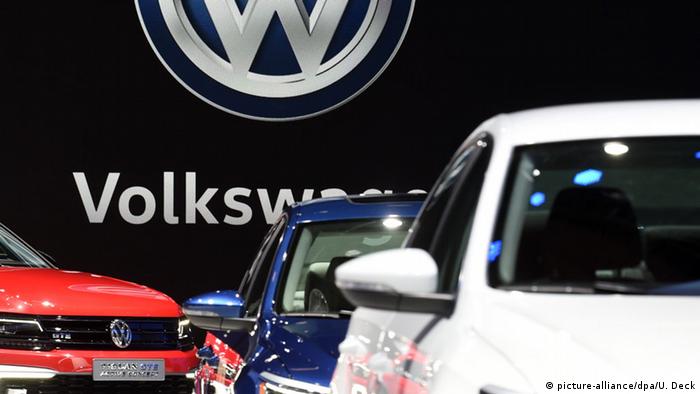 The German news agency DPA quoted an unnamed member of Volkswagen's supervisory board on Tuesday as saying there was "no indication of even the slightest hope of a single cent" in dividend payments this year.

This could further irk investors, whose patience is already wearing thin after the auto maker admitted last year that it had intentionally installed malicious software to deceive environmental regulators.

Officially, Volkswagen has not yet said whether it will pay out a dividend this year or not.

The company is facing a slew of lawsuits over that admission from shareholders who feel swindled after they watched the company's stock price tank. Their contention is that Volkswagen should have warned them sooner about the potential ramifications of the deception, which the plaintiffs maintain were foreseeable and thus relevant to the company's share price.

The executive who spoke to DPA reportedly said as-of-yet-unquantifiable legal costs and penalties stemming from the emissions scandal would prevent the automaker from paying out a share of its profits this year to stakeholders.

Such a move would likely encounter more sympathy among representatives of Volkswagen's employees, who could view it as being necessary to put the company back on solid footing - and thus secure jobs.

Volkswagen's biggest stakeholders are the Porsche SE holding company, the German state of Lower Saxony, where the auto maker is headquartered, and a Qatari investment fund. The government of Lower Saxony has said the omission of a dividend payment won't affect any public projects already on the books.

VW was the only loser among the 30 DAX companies in early trading on Tuesday. Shares were down 1.2 percent against a temporarily bullish market in Germany. The DAX gained 0.8 percent at the start of trading before slipping into negative territory.

The emissions scandal comes at an inopportune moment for the auto industry, which is currently trying to meet consumer demand for more sustainable vehicles. Volkswagen, for its part, is investing heavily in research and development in the field of electromobility and digitalization.

Is VW too big to fail?

Is VW too big to fail?

One reason the emissions scandal has investors so worried is because a hefty penalty in the United States, where the scandal first broke, or Europe, would leave the company with less money to invest in itself.

Meanwhile in the US, Volkswagen said Monday it was recalling around 5,200 VW e-Golf vehicles over a battery problem that could cause the cars' electric engines to turn off unexpectedly.

The problem has to do with a high-voltage battery management system that is oversensitive to electrical surges, which it could misinterpret as a critical battery condition and shut down the motor while the car is still moving.

The recall affects certain model year 2015-2016 e-Golf vehicles that were manufactured between May 21, 2014 and March 1, 2016. It was the latest in a string of recalls that Volkswagen had announced since the beginning of the year.

Last Thursday, Volkswagen said some 800,000 luxury sport utility vehicles had a potentially dangerous foot pedal problem, prompting a recall. Only two days before, VW had said 177,000 of its new Passat cars in Europe had a potential electrical fault. In February, the auto maker said it would recall 680,000 cars in the US due to faulty airbags that had been supplied by the Japanese maker Takata.

Following a criminal trial, a German court has acquitted Porsche's former CEO and CFO of market manipulation charges. The managers had been accused of stock manipulation ahead of a failed Volkswagen takeover in 2008. (18.03.2016)

Volkswagen is ceasing production of the Phaeton, a prestige project that derives its name from the mortal son of the Greek god Helios, whom legend describes as nearly causing one of the world's first traffic accidents. (18.03.2016)

We've got many small pieces in VW's mosaic of scandal, but nothing concrete yet about who's to blame. The firm has to finally go on the offensive to clear up Dieselgate or face disaster, says DW's Henrik Böhme. (18.03.2016)