Voting has ended on the second and final day of polling in the Italian general election. A rise in protest voting and low turnout have led to doubts whether there would be a winner with a clear mandate. 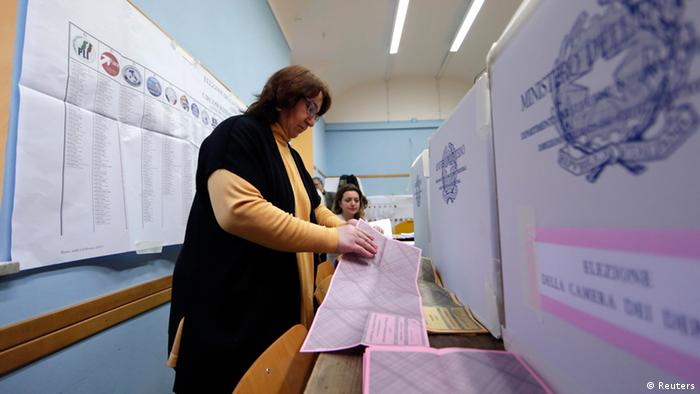 Polling came to a close on Monday as a surge in protest voting, as well as apparent voter disillusionment, raised fears of an unclear outcome.

A sharp drop in turnout was registered on Sunday, with the level of participation falling to 55 percent, down from 62 percent in 2008.

"Italy turns its back on politics, deserts the ballot boxes, and this is how it registers its protest," the left-wing daily newspaper Il Fatto Quotidiano wrote. The leading daily Corriere della Sera said the drop in turnout reflected an "acute disorientation" among the public.

It is believed that the low turnout will damage mainstream parties. Former premier Silvio Berlusconi's conservative coalition had been trailing before an opinion poll blackout came into force on February 6. The billionaire, who has served three times as prime minister, and his People of Freedom Party have conducted a populist campaign blaming Germany for Italy's economic troubles.

Who will move into the Palazzo Chigi, the prime ministerial seat in Rome: left-leaning Bersani? Or ex-premier Berlusconi? In any case, Europe is hoping for a stable government - which might not be the case. (24.02.2013)

However, it remained unclear whether, even if he wins, Bersani would be able to form a stable government that is able to last for a full five-year term.

While Italy's election laws help the largest single party or coalition group with the largest showing in the lower house achieve a majority, the situation in the country's Senate is more complicated.

Negotations on how to achieve a majority were expected to be complicated by the euroskeptic protest party, the Five Star Movement.

The party, led by former comedian Beppe Grillo was expected to make a strong showing, possibly emerging in second or third place. Grillo is calling for a referendum on the euro.

An inconclusive result could lead to a sell-off in Italian bonds and renew fears about the euro, according to experts.