Most refugees applying for asylum in Germany hope to get a job and settle into normal life as soon as possible. But despite all efforts to adjust, many feel that the best option is to go back home. 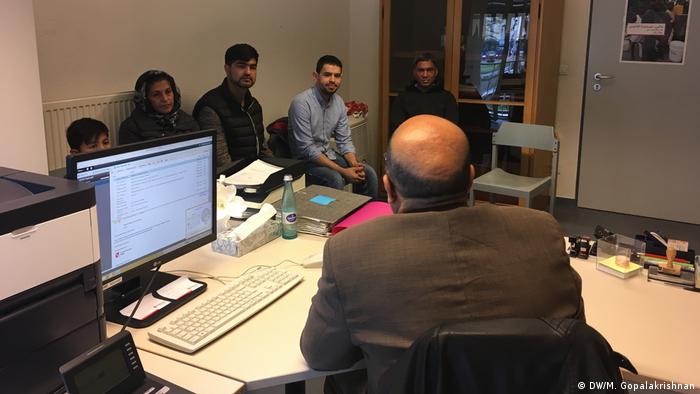 An Afghan refugee boy (far left) with his mother and father, and two Pakistani migrants at the Malteser Werke's office

Behrouz Asadi's office is a stone's throw away from the central railway station in Mainz, in Germany's southwest. Asadi is an advisor with the "Malteser Werke," a Catholic relief organization that provides counseling to refugees. His office inside Mainz's city hall is easily accessible to migrants who want to find out more about how they can go back to their home countries.

Five refugees wanting to go back to their home countries have come to Malteser Werke's counseling center. They include an Afghan family and their two sons, and two asylum seekers from Pakistan, are waiting to find out whether their applications for voluntary return have been accepted and when they can go home.

"Our counseling center is an open and fair center, which means that people who come here do so voluntarily. Our task is to reach out to people and help them, regardless of their legal status," Asadi tells InfoMigrants.

"First of all, the asylum seekers who want to go home tell us why they want to return. Are they doing so voluntarily?" The Malteser Werke then provides several sessions of counselling to migrants. If they finally decide to go back, other authorities in Mainz are brought into the picture to discuss the way the refugees will be deported, the journey's costs and so on. Officials also try and look into individual concerns, the counselor says.

There are many reasons why asylum seekers may want to go back to their countries. According to Asadi, refugees who have a legal status may choose to return because they feel that all their attempts at integrating into Germany society have failed or because they feel homesick and "want to die in their homeland." 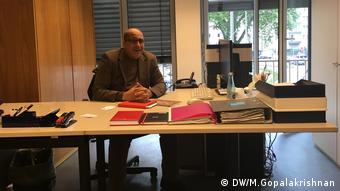 The Afghan family at the counselling center in Mainz is a good example. The family fled to Germany in 2013 after receiving death threats by the Taliban. They have been recognized as refugees in Germany, but are convinced that they cannot cope with life here and have decided to go back. "Ever since we are here, we have been having problems finding work, learning the language, and our finances were too little. We could not manage our four sons with the money," the father says, adding that he wants to go back with his self-respect intact.

Even his 18-year-old son Zaki, who now speaks fluent German and works as a salesman, wants to go back to Kabul. "To me, my family is the most important thing. If they go back, I will go with them because I don't want to be here alone. I miss my culture, my family, everything, the food especially and my friends," he says.

Settling down at home

The Afghan family has decided to start its own little car workshop in Kabul and is waiting for the application to be approved by Mainz authorities. Counselor Behrouz Asadi says that his organization is concerned with the question of securing a livelihood for these people when they go back, "because they want to go back with respect and they should be able to survive when they are there."

For this purpose, Asadi's group, the "Malteser Werke," gets all the necessary information from the refugees. Its representatives sit together with officials of the foreigner's office, social service department, the employment center and the auditing center. Together they decide how they will support the returnees or whether they will support these people in any way at all. Support measures include programs by the German government, like "Starthilfe Plus" and those by the International Organization for Migration (IOM).

"There are some cases in which officials decide to not support the returnee. These include people who have committed crimes or given false information," according to Asadi. His counseling center also supports refugees who want to leave Germany, but go to a third country instead of their homelands.  These could include people whose families are in other countries, he adds. Mohammed Ajmeer paid $8,000 to human smugglers who brought him to Europe

Once a refugee applies for returning voluntarily, his application could take anywhere up to two months to process, Asadi tells InfoMigrants. However, some cases take time, forcing refugees to linger in Germany, resulting in more frustration.

Mohammed Ajmeer's story is a case in point. Originally from Pakistan-administered Kashmir, Ajmeer borrowed over $8,000 for paying human smugglers to get him to Europe. "I thought the prospects were good and I would have a job," he told InfoMigrants. "But I didn't feel like taking any classes or doing anything when people told me that refugees from Pakistan had a slim chance of getting asylum in Germany," he adds.

"I want to go back because I have problems at home. My mother is ill and I am the oldest in my family," he says. Ajmeer is unable to work because of his visa status. His only hope now is to get Mainz's officials to approve his return and get some money to set up a business back home. It has already been three months since he filed for deportation, he says, adding, "Could you please tell them to speed up my application?"

DW is not responsible for the content of external websites

Tens of thousands of Nigerians who fled to Cameroon to escape the Boko Haram insurgency could be voluntarily repatriated under an agreement signed by the UN refugee agency, UNHCR. (02.03.2017)

Iran has freed a British-Australian academic accused of spying in an apparent prisoner swap. The 33-year-old said she had 'bittersweet feelings' leaving Iran, despite having spent two years in a notorious prison.

Flynn's was the highest-profile pardon granted by Trump since he took office. Democrats slammed the pardon, calling it an abuse of power.