Voice assistants on the rise in Germany | Business | Economy and finance news from a German perspective | DW | 29.08.2018

Voice assistants on the rise in Germany

Germany's IT lobby group Bitkom has said it expects voice assistants to have "a great future." Its fresh study, co-authored by Deloitte, says one in eight Germans is already using a smart speaker at home. 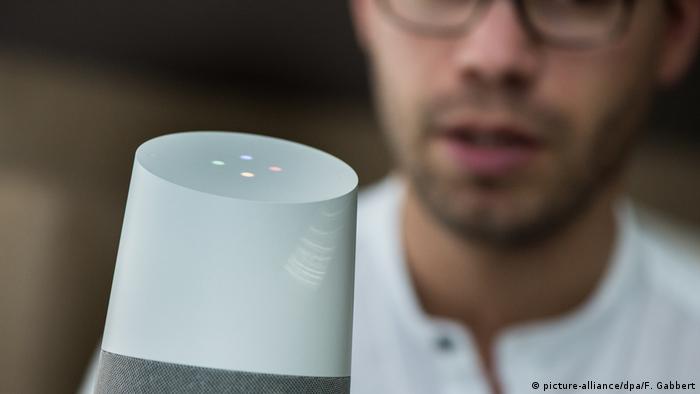 Only days before the world's leading trade show for consumer electronics and home appliances, Berlin's IFA, opens its gates to the general public, Germany's Federal Association for Information Technology, Bitkom, and consultancy Deloitte published a study Wednesday showing the rapid spread of voice assistants across Germany.

It revealed that one in eight Germans (roughly 13 percent) already owned and used a voice assistant, be it an Amazon Echo, a Google Home or a HomePod from Apple.

The study also said that 84 percent of Germans had heard of digital voice assistants and roughly knew what they were meant for — back in 2016, it was only 5 percent (Amazon's first-generation voice assistant only hit the German market two years ago).

"We're witnessing the rapid rise of smart voice assistants in the country," Bitkom's Christopher Meineke said in a statement, adding that the devices had forced their way into people's consciousness.

Meineke said that voice-controlled devices did not only gain currency in the consumer electronics sector, but also in the home appliances industry.

"What we're seeing is the creation of a multibillion-euro market," he argued, adding that hardly anyone could afford to ignore the new trend.

The survey indicated that 37 percent of Germans having smart-home devices used voice-control technology to interact with them, with smartphones more often than not serving as users' control centers.

The survey also highlighted the spread of augmented reality apps, AR being a technology that superimposes computer-generated images on users' view of the real world around them.

Deloitte's Klaus Böhm said AR was being pushed "not just by the gaming industry, but also by companies providing navigation technology and educational programs."

By the end of this year, 2.2 million people in Germany are expected to actively use AR services and applications, with the number of users predicted to be twice as high in 2019.