Vo Nguyen Giap was a key figure in securing his country's independence and later victory in the Vietnam War. Historian Derek Frisby examines the legacy of this 'ruthless but brilliant' general who recently died aged 102. 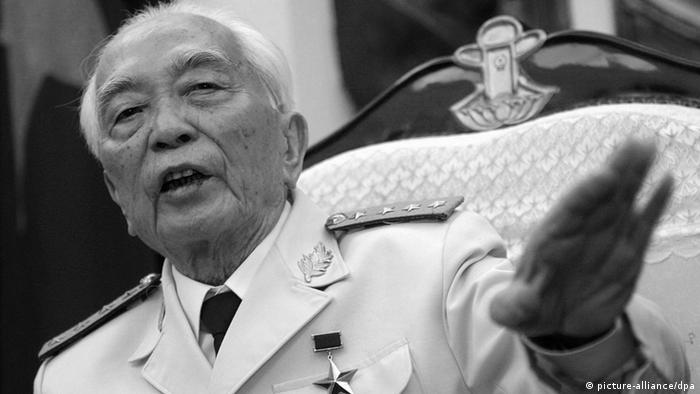 Thousands of mourners gathered outside the Hanoi house of the revered general on Sunday, October 6 to pay their last respects to a man, who enjoyed a legacy second only to founding president and Communist leader Ho Chi Minh. Giap had died Friday evening in a military hospital in Hanoi where he had spent close to four years suffering from long illnesses.

Known as the "Red Napoleon" for his exceptional military strategies, Giap first helped organize resistance to Japanese occupation during World War II. As a commander, he inflicted an unexpected defeat to the better equipped French army at Dien Bien Phu in 1954 which ultimately contributed to France's withdrawal from Indochina.

However, the country was shortly after divided into a communist North and a non-communist South. The self-taught military strategist then succeeded in defeating the US-backed South Vietnam government in April 1975, reuniting the war-torn country. In a DW interview, military historian Derek Frisby takes a look at Giap's military genius and legacy.

DW: What makes Vo Nguyen Giap stand out from other generals in history?

Derek Frisby: Giap was the architect of the Vietnamese Army, arguably perhaps the nation as it exists today. He was a master at logistics and at waging "revolutionary war" with a degree of flexibility and adaptability that few before or since have been able to emulate. 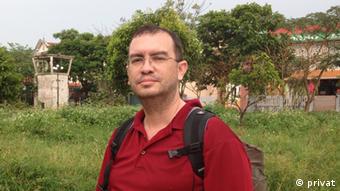 Frisby says Giap was the master of doing the unexpected

Giap was able to marshal not only the material resources of a rather non-industrialized society to fashion a military machine capable of challenging the superpowers, but was able to tap into the political will of his people to fuel it. He doesn't so much stand out from other generals in history as he stands tall among them.

What was ingenious about his military strategies?

Giap was the master of doing the unexpected. He played on the Western powers' belief that firepower alone determined victory. Their overconfidence and hubris was their downfall. No greater example of Giap's genius can be found than Dien Bien Phu. He demonstrated his flexibility and determination by having his men hand-transport artillery and anti aircraft guns into almost impenetrable terrain. By doing what his enemy considered impossible without modern means left the French garrison dumbstruck in an untenable position.

How did Nguyen Giap manage to fight Western powers such as France and the US?

General William Westmoreland, who commanded US military operations in the Vietnam War, unhesitatingly believed Giap was a butcher for relentlessly sacrificing his soldiers in unwinnable battles. Yet, that assessment in itself is key to understanding the West's failure to defeat him.

General Vo Nguyen Giap, who helped secure Vietnamese independence from France and later served in the Vietnam War, has died in a hospital in Hanoi. After Ho Chi Minh, Giap was Vietnam's most prominent military leader. (04.10.2013)

US, Vietnam cooperate to clean up toxic Agent Orange

The US sprayed millions of liters of Agent Orange on the jungles of Vietnam during its war there, creating long-term adverse health effects. Decades later, the former enemies are cooperating to clean up the chemical. (09.08.2012)

Giap understood that protracted warfare would cost many lives but that did not always translate into winning or losing the war. In the final analysis, Giap won the war despite losing many battles, and as long as the army survived to fight another day, the idea of Vietnam lived in the hearts of the people who would support it, and that is the essence of "revolutionary war."

What impact did Giap have on the history of Vietnam and Southeast Asia?

Giap's success made the Western powers wary of intervening in similar conflicts elsewhere in Asia. This has allowed the region to develop with relatively little interference in the last few decades. With the help of Western capital Vietnam has now developed an industrial economy and more and more tourists are rediscovering the inherent beauty of the country. However, Giap in his later years decried this industrial development as environmentally irresponsible and to some extent a betrayal of his own Communist ideology.

How will Giap be remembered?

For the West, Giap's legacy continues to be one of reluctant admiration. Despite the US' experience of successful "revolutionary war" in the late 18th century, we still continue to struggle with having lost the Vietnam War, despite winning the key battles. Given the conflicts over the last decade, the US has had to relearn the lessons of Vietnam. 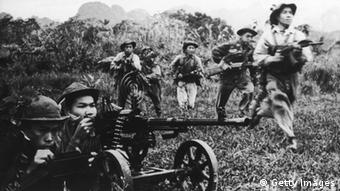 Frisby: 'Giap understood that protracted warfare would cost many lives'

Surprisingly for Vietnam, there has yet to be a comprehensive study of Giap's life in Vietnamese that I know of, despite numerous biographies compiled largely from Western sources. With his passing, I believe the Vietnamese people will begin reincorporating him into the historical narrative of their most recent national development, and elevate him into the pantheon of great Vietnamese leaders of all time.

Derek W. Frisby is an associate professor at Middle Tennessee State University where he specializes in US, and military history. He was also a 2003 military history fellow at the US Military Academy at West Point and served six years as editor of the West Tennessee Historical Society Papers.