India police have been ordered to shoot rioters without warning as violent protests by the Jat caste escalate in the state of Haryana. The Jat are demanding government benefits. 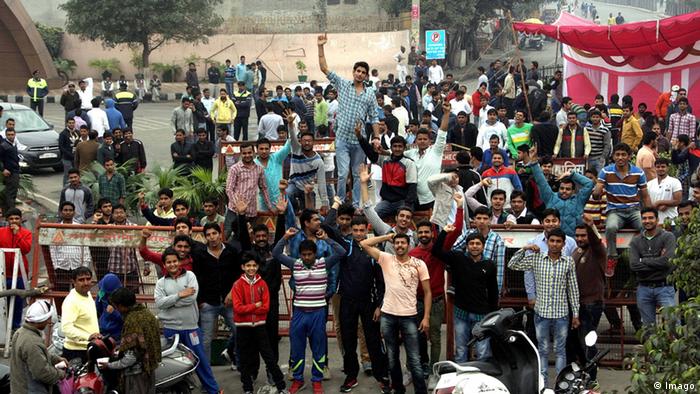 Stick-wielding mobs rampaged across a northern Indian state on Saturday, torching vehicles, rail stations, shops and a local lawmaker's house as the government issued orders for police to shoot without warning in a bid to stamp out protests that have spiraled out of control.

At least four people have been killed since Friday and several dozen injured in Haryana state, north of the capital, New Delhi, as authorities helicoptered in troops to several districts after protesters blocked roads.

Curfews have been issued across several districts to quell the weeklong protests.

The protests are being driven by the Jat agricultural caste, which is demanding government benefits, including higher representation in government jobs and university spots.

Delhi: city of wealth and slums

Delhi: city of wealth and slums

The Jat, a relatively well-off caste, want their share of spots increased, but this is opposed by lower castes. The Jat argue the quotas keep them out of certain jobs, while lower castes say their quotas should be protected.

Talks between Jat leaders and the government broke down on Friday.

The protests are similar to those by the well-off Patidar and Patel castes last August, which left several people dead. Those castes were demanding treatment on par with lower castes.

Although the caste system in India is officially abolished, caste membership is still recognized at a societal level.