Violence Flares Once More as Greek Rioters Mark Week of Unrest | Europe| News and current affairs from around the continent | DW | 12.12.2008

Students pelted police with firebombs and stones in Athens on Friday, Dec. 12 in new clashes that first broke out over the police killing of a teenager a week ago. 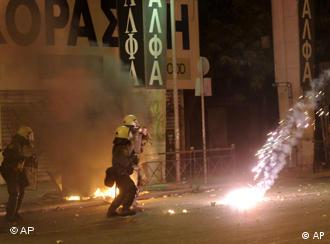 Students, angry at the shooting incident, low wages and unemployment, attacked police outside the parliament building on a seventh day of violence that has shaken the government. Riot police fired teargas in response.

Greek Prime Minister Costas Karamanlis pledged to guarantee the safety of its people and citizens.

"Greece is a safe country," he told a news conference in Brussels

Riots since the Dec. 6 shooting of 15-year-old Alexandros Grigoropoulos have destroyed hundreds of shops, banks and cars, rattled the conservative government and shaken investor confidence in the 240 billion euro economy ($315 billion) as the global crisis bites.

Even as Karamanlis spoke in Brussels, about 5,000 protesters marched through Athens carrying banners saying: "The state kills" and "The government is guilty of murder".

In bond markets, the spread between Greek debt and German benchmark bonds -- a measure of perceived risk -- reached its widest point this decade on Friday, at over 2 percentage points.

"We do not expect investors to forget this situation quickly," said David Keeble, head of fixed income research at Calyon Bank. 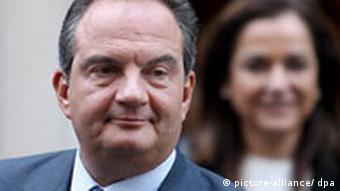 Karamanlis said Greece was weathering the credit crunch better than other EU members and sent a message to markets that, despite the crisis, the economy was solid.

"Greece is covering and will (continue) to cover its borrowing needs smoothly," he said.

The killing of Grigoropoulos ignited simmering anger over a series of scandals, unpopular reforms and misfired economic measures as the credit crunch reached Greece.

Police sources say they are running out of teargas after using more than 4,600 capsules in the last week and have urgently contacted Israel and Germany for more stocks.

"Everyone wants this government of murderers to fall. The government in four years has only carried out reforms against students," said Maria Tsoupri, 22. "We don't see a future. We have a future only through struggle."

Karamanlis, whose New Democracy party has a one-seat majority and has seen its popularity ratings dive in recent months, expressed sorrow at the shooting but said the violence that followed was the work of extremists.

Media criticized the government's slow response to the crisis.

Rain subsides and rioters again take to the streets 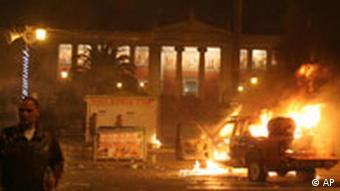 Anger at the shooting and social conditions is fuelling the riots

Police said 432 people, including many foreign immigrants, have been detained, with 176 of them charged with violence and looting.

Many Greeks are angry that the policeman charged with murdering the teenager has not expressed remorse. Epaminondas Korkoneas, 37, testified that he fired warning shots in self-defense which ricocheted.

He and his police partner, charged as an accomplice, are being held in jail pending trial, which could take months.

Greeks rushing to work on Friday were keen for their cities to return to normal after the protests, which the Greek Commerce Confederation said caused 200 million euros ($265.3 million) of damage to more than 500 shops in Athens alone.

Several schools and universities remained occupied by students and professors formed a human chain around the main university building to protect it from further damage.

"It will become calm now. But I want the government to clean up, to get the market and the economy moving," said Isidoros Aletas, 21.

Athens saw its calmest night since the outbreak of violence after a fatal police shooting of a Greek teenager last weekend, Greek state radio said Friday. (12.12.2008)

General Strike and Riots on 5th Day of Greek Unrest

A general strike crippled Greece on Wednesday, as running street battles between youths and police continued for a fifth day. The death of a teenager, which sparked the riots, may have been caused by a ricochet bullet. (10.12.2008)