Greek Youth Riot Outside Prison as Chaos Continues | Europe| News and current affairs from around the continent | DW | 11.12.2008 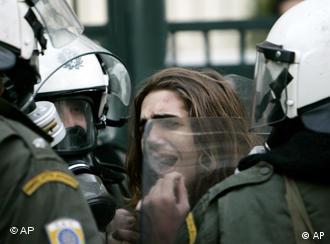 Emotions ran high in Greece on Thursday, Dec. 11, as the two police officers who were charged in the shooting death of 15-year-old Alexis Grigoropoulos were scheduled to be transferred to prison. Several hundred protestors camped out in front of the country’s biggest prison to await the officers' arrival.

At the Koyrdallos prison, protesters threw rocks and other missiles at police, according to a prison guard. Police fired tear gas at the protestors.

Grigoropoulos' death has sparked six days of rioting and protests across the country. The controversy heightened after initial reports indicated that Grigoropoulos was killed by a bullet ricochet, legal sources said.

No signs of truce 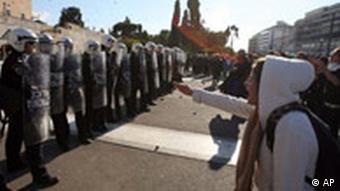 Most of the demonstrations have been tense, but peaceful

Earlier in the day, gangs of young people threw rocks and firebombs at Athens police stations while demonstrators clashed with police in front of the legislature building.

"We are fed up with scandals and corruption," demonstrator Efi Giannisi, a 38-year-old English teacher, told Reuters news agency. 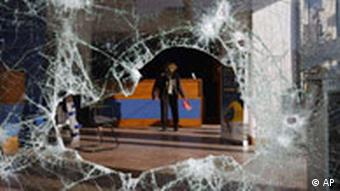 Rioting and looting have caused millions in damages

The violence has taken its toll. The Athens Chamber of Commerce and Industry said 435 businesses had been hit, with 37 completely gutted. The damage in Athens alone was worth about 200 million euros ($259 million), according to the Greek Commerce Confederation.

That left Greeks extremely frustrated, particularly with the inability of the government to contain the violence. George Papalexis, the owner of a gem store, said his business had sustained losses of 80,000 euros after rioters smashed through a reinforced window and made off with jewelry.

"Personally, I expect the government should resign," he told AFP news agency. "Very soon we'll see a change of government. It's a disgrace to see a city left to burn."

In a televised address, Prime Minister Costas Karamanlis pledged up to 10,000 euros to stricken businesses, plus tax breaks and government-guaranteed loans to rebuild damaged property. Despite the turmoil, Karamanlis's office said he would attend a European Union summit in Brussels that starts Thursday.

With the current government holding only a razor-thin majority in parliament, the country could be heading for early elections. The opposition socialist party, which leads in the polls, has demanded just that.

"The most likely scenario now is that Karamanlis will call elections in two or three months' time," Georges Prevelakis, professor of geopolitics at Sorbonne University in Paris, told Reuters news agency. 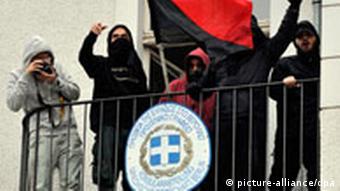 Greek embassies around Europe have been targeted by protestors

But there were signs that Athens was calmer than on Wednesday, when many people took to the streets as part of a long-planned general strike by the country’s two largest unions. Still, there are concerns that the violence is not over. A fresh student demonstration was scheduled for Thursday evening, according to the interior ministry.

Outside Greece, small flare-ups were reported around Europe.

Arsonists torched two cars outside a Greek consulate in southwestern France before dawn Thursday, police said. Eight residents had to be evacuated from the building. Police found graffiti on a wall opposite the consulate reading "Support for the fires in Greece," "Insurrection Everywhere" and "The Coming Insurrection,” AFP reported.

In Istanbul, Turkish left-wing protestors threw paint over the front of the Greek consulate in Istanbul. In Moscow and Rome, there were reports that Greek embassies were targeted by firebombs.

In Spain, a dozen demonstrators were arrested and several police injured in clashes that took place in Madrid and Barcelona. Another 32 people were arrested in Copenhagen when a protest in support of Greek rioters turned violent, according to police.

The Athens court hosting the police officers accused of killing a 15-year-old boy was attacked by rioters hurling petrol bombs Wednesday as police fought with protestors during a nationwide strike elsewhere in the city. (10.12.2008)

General Strike and Riots on 5th Day of Greek Unrest

A general strike crippled Greece on Wednesday, as running street battles between youths and police continued for a fifth day. The death of a teenager, which sparked the riots, may have been caused by a ricochet bullet. (10.12.2008)

Athenians are not happy about the rioting or the government's response (11.12.2008)