Police say officers were attacked and cars torched as thousands of people gathered in opposition to the clearance of the radical left-wing Köpi-Platz encampment in central Berlin. 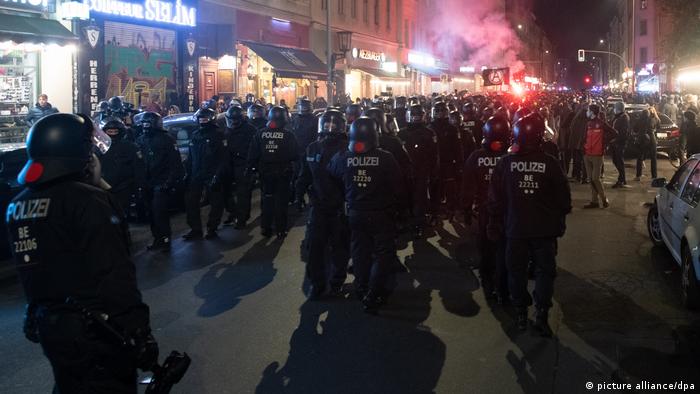 Protesters gathered in Berlin on Friday night, hours after the Köpi-Platz car camp was cleared

Protesters caused serious damage to property and attacked police officers on Friday night in opposition to the eviction of a vehicle camp in central Berlin, police said.

The clearance of a part of the Köpenicker Strasse encampment (nicknamed Köpi-Platz), where about 50 people lived in improvised homes in vehicles and wagons, took place earlier in the day.

As many as 8,000 people took part in what a police spokesperson said was a sometimes "aggressive" demonstration in the German capital's Kreuzberg district.

The spokesperson said several officers were injured during confrontations with protesters, who set off flares and fireworks.

More than 20 people were arrested, according to Berliner Morgenpost newspaper.

What is the Köpi camp?

The encampment is a yard next to the Köpenicker Strasse housing and social project, which is considered one of the last symbolic projects of the left-wing anarchist scene in Berlin.

The building — which has about 30 residents, along with a bar, vegan cafe, cinema, gym and rehearsal venue — is currently not threatened with eviction. 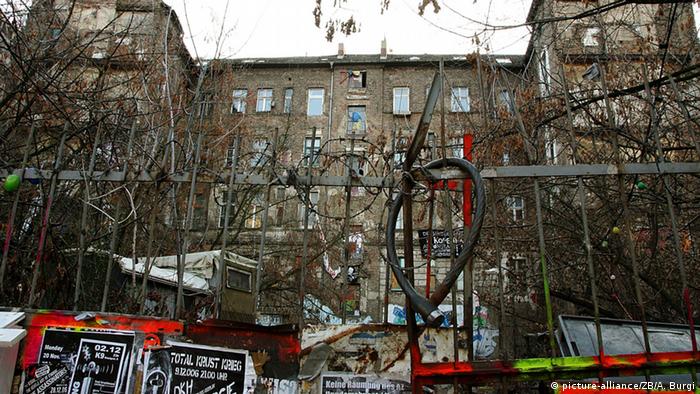 But the 50 or so people who created improvised homes in vehicles and wagons in the yard were ordered to leave the site by Friday.

The land, which once sat alongside the Berlin Wall in then East Germany, covers more than 2,600 square meters (28,000 square feet).

Several eviction efforts over the years have failed, but the latest order — issued in September — was enforced by the Berlin Court of Appeals on Wednesday, which rejected an urgent application by the residents to stop the clearance.

What happened during the eviction?

The procedure involved hundreds of Berlin police officers and heavy machinery, brought in to clear the improvised site.

Police moved in at around 9 a.m. local time (07:00 UTC) on Friday and took over four hours to evict the residents.

Officers cut the fence of the yard and erected mobile scaffolding to help them climb into the premises.

Many of those staying at the site had barricaded themselves into the yard, while some hid in nearby trees.

On several occasions, scuffles broke out between officers and small groups of protesters.

Police said 37 people were cleared from the site and 20 people were detained — some of them protesters. After years of eviction threats, the vehicle encampment was cleared by Berlin on Friday

What will happen to the site?

The site is prime Berlin real estate, lying a little more than 3 kilometers (1.9 miles) from the Brandenburg Gate and close to many of Berlin's cultural attractions.

The owner has been granted permission to redevelop the site into apartments, according to reports.

Some 500 protesters gathered in the northern city of Hamburg on Friday evening in solidarity with those affected by the eviction.

The demonstrators walked a circuit from the Rote Flora in the city's Schanzenviertel district before returning to a left-wing anarchist center.

Several hundred riot police are reportedly on standby in case of further trouble.

With material from the DPA news agency.

Berliners' vote to expropriate landlords' properties has made global headlines, but huge political and legal hurdles remain. Many companies affected seem confident that expropriation will never be legal.