The Venice Film Festival is the oldest film festival in the world - and the one with the most beautiful backdrop. This year's program boasts veteran filmmakers and Hollywood buzz. But who'll be on the red carpet?

Reflecting the way the world structures have evolved, the film industry no longer has exclusive monopolistic centers, said Barbera in his official speech. Cinema is "moving in a new territory, which has new rules and even a new form."

Although Barbera has seen an entire generation of filmmakers disappear due to old age or financial problems, many prominent veterans are nevertheless included in the competition on the Lido, such as the Italian director Marco Bellocchio, the Polish Jerzy Skolimowski and the Russian Aleksandr Sokurov. 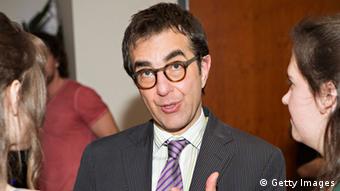 US director Charlie Kaufman ("Being John Malkovich") comes with an animated feature, the Brit Tom Hooper ("The King's Speech") shows his latest film. The Canadian Atom Egoyan and the Israeli Amos Gitai are two more big names in the competition. Although no German director is part of the lineup, Germany was a co-producer on Sokurov's and Egoyan's films.

Stars in the jury and on the red carpet

Mexican star director Alfonso Cuarón will be heading the jury. German actress Diane Kruger, Turkish director Nuri Bilge Ceylan and Polish director Pawel Pawlikowski (who won this year an Oscar for "Ida") will be supporting him as members of the jury.

Kruger will be just one of many Hollywood stars walking the red carpet rolled out in front of the Festival Palace. Johnny Depp, Benedict Cumberbatch, Kristen Stewart, Juliette Binoche, Anthony Hopkins and the young Academy Award winner Eddie Redmayne all plan to be there too.

Political cinema also has its place in the program. For instance, a Ukrainian documentary, "Winter on Fire: Ukraine's Fight for Freedom," by director Evgeny Afineevsky, is about the protests on Maidan Square.

Just a few day after the oldest film festival in the world takes place, a Canadian rival will be rolling out its own red carpet: The Toronto Film Festival opens on September 10. The Canadian metropolis has recently become a major competitor in the festival circuit, and many North American studios choose to send their latest productions to Toronto instead of Venice.

Those who want to see films directed by Germans will also be better off in Canada. Toronto will present Roland Emmerich's latest blockbuster, "Stonewall," as well as the recent work of the Oscar prizewinner Florian Gallenberger, "Colonia."

Yet Venice doesn't need to worry too much: Nothing can rival with the architectural backdrop of this festival - and that's just one of the highlights of a rich program.

The 56th Venice Biennale has celebrated its half-way point by welcoming its 135,000th visitor. The art celebration unites under the theme "All the World's Futures," and features the world's leading contemporary artists. (10.08.2015)

Political films, glamor and stars: This Swiss film festival has it all. Held from August 5-11, the tradition-rich event has one of the world's most beautiful movie theaters. (05.08.2015)