Opposition leaders have demanded an end to political persecution and a return to democracy. Vatican officials said the pope is following the situation in the embattled South American nation "very closely." 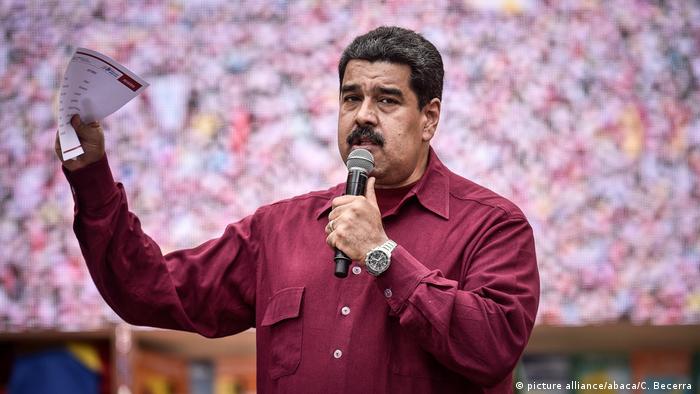 Strike in Venezuela as Maduro threatens opponents with jail

Venezuela's president has threatened to jail "anyone who violates the constitution," amid vows by his opponents to launch a trial to remove him. The warning came after opposition-led strikes.

"I hereby stress my total commitment to this dialogue process. I am reaching out, extending my hand to talk with the MUD," Maduro said. "Let us do our utmost to move forward in a progressive, sustained way."

The meeting marks the first of its kind in nearly a year marked by a vicious economic downturn and growing political discontent with Maduro's government, which the opposition blames for the OPEC country's problems.

The opposition delegation said in a statement that it would "demand an end to the repression and persecution of democrats and the people, and will walk away from the dialogue if the demands are not resolved in the short term."

However, some opposition parties, including the hardline Popular Will party, objected to participating in the Vatican-backed talks, warning that the "conditions are not in place for dialogue."

"The government insists on blocking all the peaceful, constitutional and democratic means," said an open letter from MUD parties that rejected the talks.

The Vatican has placed its weight behind the talks after Maduro met with Argentine Pope Francis.

"The pope is following the situation of this country very closely and hopes this process can continue peacefully," said papal envoy Archbishop Claudio Maria Celli.

The Catholic Church in Venezuela called on both sides to attend the meeting to "avoid a spiral of violence that would increase the suffering of our beloved people."

Last week, thousands of Venezuelans rallied against the electoral board and rejected a recall referendum on Maduro's presidency.

The opposition has vowed to march on the presidential palace this week, the site of a 2012 failed coup against Maduro's mentor and predecessor Hugo Chavez.

Venezuelans rally against the president